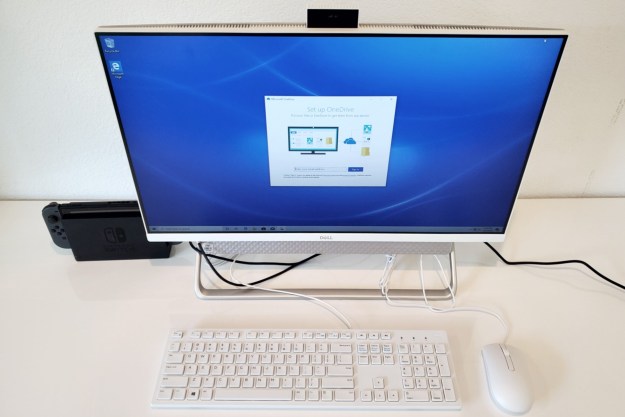 “The Inspiron 27 7790 is a great choice for small apartments or dorm rooms.”

If live in a dorm room, studio apartment, or other small space, you might not have room for a full-sized TV.

One solution? Buy a large computer monitor and pretend it’s a TV. That might get you by, but the Dell Inspiron 27 7790 presents a more elegant solution.

It’s an all-in-one PC that includes an HDMI input jack, meaning your Nintendo Switch or Roku streaming stick can plug directly in. That’s console gaming and streaming right on your Windows 10 desktop. But the Inspiron 27 (starting at $849.99) also looks the part, with its built-in soundbar and TV-like stand. Can it adequately be both PC and TV without sacrificing either?

The Inspiron has a sleek silhouette, that’s for sure. The 27-inch Infinity Edge display is framed by narrow, 8mm white bezels on three sides and a slightly larger chin on the bottom that’s anchored by a silver speaker bar. At $849 ($999 in the configuration we reviewed), you’re essentially getting the equivalent of a $200 1080p monitor neatly packaged with a space-saving PC in an all-in-one design where the screen is hoisted on top of a pre-installed tented stand composed of bent metal tubes.

The result is that the Inspiron has a similar look to the sculptural wire base of HP’s $499 all-in-one 24. Unlike the iMac’s aluminum stand, the metal wire design doesn’t feel as premium, but it makes the Inspiron 27 less imposing on a desk.

The airy aesthetics of the Inspiron 27’s stand comes at the expense of ergonomics. The base allows the screen to recline, but you can’t tilt the panel forward nor can you rotate or raise or lower the display. Lacking a VESA bracket on the rear, you also can’t mount the Inspiron to free up more desk space either.

The desktop’s dual-tone design extends to the silver, curved rear panel. Even though there are four generous USB-A 3.1 Gen 1 ports located on the back towards the bottom, only two of them are available if you decide to use Dell’s bundled, color-coordinated wired keyboard and mouse.

The star of the show is the HDMI input port, which transform the screen into a console gaming TV.

Then there’s the star of the show: The HDMI input port. This one simple connection allows gamers to plug in their console of choice and use the desktop’s screen as a TV screen. I quickly grabbed my Switch and plugged it in with no problem whatsoever. While I didn’t have the opportunity to test the Inspiron 27’s performance with an Xbox One or PlayStation 4, titles such as Super Mario Odyssey and The Legend of Zelda: Breath of the Wild all looked great. The built-in soundbar provided a rich sound profile, which is a step up from monitor speakers.

Switching between video input sources is easy too. A recessed video source switcher is located on the right bottom edge of the soundbar next to the power button, and you’ll get a visual on-screen confirmation identifying if you’re in “PC” or “HDMI” mode.

Those needing a bigger screen experience can then connect the Inspiron 27 to a projector or HDTV through the HDMI output port on the rear. Given the light 22-pound weight, it wouldn’t be difficult to tote it between an office and a conference room to connect the Inspiron to a projector for impromptu PowerPoint presentations. The desktop itself is powered by an external charging brick with barrel connector.

Not quite a TV

Though switching between video input sources is easy, adjusting volume while in HDMI input mode is the biggest annoyance with the Inspiron 27’s setup. Unlike stand-alone displays, the Inspiron doesn’t come with dedicated monitor control buttons.

It also doesn’t come with any kind of remote. To make adjustments to the volume, brightness, or contrast, it’ll require you to switch into PC mode first. From there, you’ll need to use Windows 10’s software controls or the dedicated keyboard keys to make your adjustments.

A small remote would’ve made this task a lot less tedious and properly mimicked the experience on traditional televisions.

Once these adjustments are made, gaming with the Nintendo Switch is an overall enjoyable experience, provided you don’t need to adjust the volume frequently. As expected with the casual PC games, I didn’t notice any screen tears or ghosting with the display.

Beyond console gaming, more serious PC gamers can even connect a more powerful laptop or desktop to the Inspiron 27’s HDMI input jack, which could be a useful for upcycling this desktop into a monitor once the internal silicon ages, though having a Thunderbolt 3 port and eGPU would have made accomplished the same purpose.

For college students looking to replace a stand-alone TV with this 27-inch screen will find the Inspiron a mixed bag. Connecting a set-top box like an Apple TV or Amazon Fire TV Stick worked well – I tested this on both the pre-4K Apple TV and the Fire TV Stick – and you can comfortably view content from a streaming TV service like , Netflix, or Hulu.

I wish the Inspiron shipped with its own dedicated remote for some basic TV-style controls.

Live sports content, like football, streamed smoothly when viewed through the ESPN channel on AT&T’s TV Now service using the Fire TV Stick . The game I watched only showed occasional choppiness, likely due to the service’s buffering and streaming limitations rather than the Inspiron’s hardware.

Lacking a coaxial input jack, you won’t be able to connect a cable box or a signal from your college campus’ video source, however. If you’re a cord-cutter, then you can use the remote from the Fire TV or Apple TV to change channels and switch between various . But just like the limitations with , you won’t be able to easily adjust the volume without having to get up and switch back to the PC.

Given that commercials on AT&T TV’s service sometimes play louder than the actual programming, not being able to easily change the volume can be annoying. If you hook up wired or Bluetooth speakers, you can overcome some of the Inspiron 27’s limitations with volume controls.

A laptop disguised as a desktop

But again, the Inspiron 27 is more than just a monitor. It’s a full-fledged desktop PC too. At least… it pretends to be.

With its 10th-gen U-series processors and more anemic GeForce MX110 graphics, the Inspiron 27’s spec sheet doesn’t read like a standard desktop PC. It uses all laptop components, similar to some other all-in-ones like the HP Envy line. While this means performance can be limited, these laptop components help keep the chassis small, at just over an inch thick.

Don’t expect to run demanding applications or games like you could on a more powerful desktop chip.

I found the quad-core Core i5-10210u processor inside our review unit to be fast enough for general productivity tasks, like browsing the web and working in Office documents. It’s similar performance to what you get on a Dell XPS 13 or other premium laptop. Just don’t expect to run demanding applications or games like you could on a more powerful desktop chip.

It’s a similar story with the graphics. Don’t expect to boot up Jedi: Fallen Order at max settings, but older titles play fine if turned settings to low. Call of Duty: WWII and Honor 4 both looked good in my tests with very minimal stuttering, and Fortnite was definitely playable when scaled to 720p resolution using the game’s lowest settings. If you don’t have a need for discrete graphics, Dell offers a cheaper model with integrated graphics.

The system also comes with 8GB of memory, alongside a 256GB SSD and a 1TB of hard disk drive for added storage, all of which is upgradable and serviceable.

It’s unfortunate that Dell didn’t add in a 3 port on this unit to power external GPUs. Even if you were to use the screen alone with a more powerful gaming PC, you’ll still be limited to the panel’s 1080p resolution and 60Hz refresh rate. This is no proper gaming monitor in that respect.

Our review unit did not come with a touchscreen, but one can be selected with upgraded configurations, but touch features likely won’t work with HDMI input sources.

For privacy conscious dorm dwellers, the stowaway webcam at the top can popup when needed or stowed out of sight, a trend that’s appearing more on laptops and desktops. Upgraded configurations of the Inspiron 27 can also be equipped with an IR module alongside the FHD cam for Windows Hello password-less logins.

The Inspiron 27 7790 extends beyond its purpose as an all-in-one PC. Being able to connect a console or media box to this all-in-one brings a lot of value to this solidly mediocre desktop, and gives the Inspiron 27 a unique gaming edge. Despite lacking volume or brightness controls, college students and cord-cutters will appreciate how versatile the HDMI input port on the Inspiron 27 can be.

If you have the extra cash to splurge, Apple’s iMac series, which starts at $1,799 for the base 27-inch configuration is a good alternative to the Inspiron 27. For computing tasks, the iMac will deliver better performance, which can be useful for students working with large files or who need the graphics horsepower for creative tasks. However, lacks the HDMI input.

HP’s premium Envy all-in-one series comes with the same video input port, allowing you to use the desktop’s display for non-PC purposes. The 34-inch curved edition that we previously reviewed may be too unwieldy for small spaces, though. The more conventional Envy AIO edition matches the Inspiron’s 27-inch footprint, comes with a similar privacy-focused pop-up webcam, and upgraded GeForce GTX 1050 graphics making it better suited for 1080p PC gaming, but is more expensive.

With a 10th-gen laptop-class Intel Core i5 processor, the Inspiron 27 7790 is expected to last for at least as long as most . This desktop should easily be able to get you through your college years, and graduates can squeeze even more life out of the Inspiron after the silicon inside has lived out its useful life. By connecting a game console or streaming stick, an aging Inspiron 27 can be upcycled as a streaming screen for the kitchen or kid’s room.

Dell offers a standard one-year warranty with mail-in service for repairs. If you need extra protection, you can extend the coverage for up to four years, add accidental coverage, or both for up to $339. Compared to our $999 review unit, the highest warranty coverage you can get costs more than one-third of the Inspiron’s price, so unless you’re prone to accidents, the value of the extended protection may not be worth it.

Yes. The desktop’s HDMI input port adds a lot of versatility for gamers and cord cutters, allowing this all-in-one to behave in ways beyond what a PC or laptop is capable.