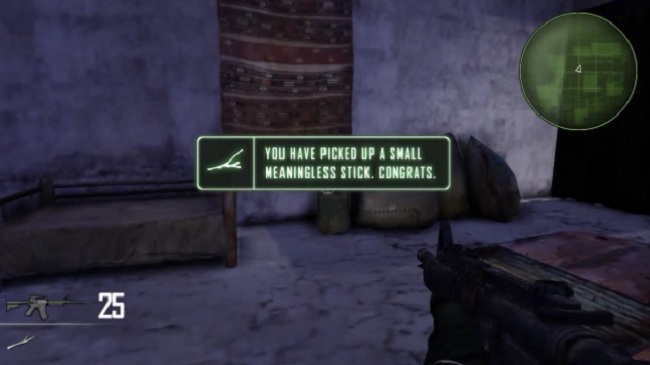 The Breakfast Club of Zelda

From the team that brought you the trailer of an indie film version of God of War, comes the 1987 trailer for the teen dramadey “The Legend of Zelda”, which combines the best of the John Hughes films of the 80s. It really is easier to watch it than it would be to explain, and if you don’t get all the film references, keep it to yourself so we don’t feel old.

Epic Games, the makers of the Gears of War series, and developer People Can Fly are nearly ready to release Bulletstorm, a game that Fox News claimed may be the “worst game of all time”, thus almost guaranteeing an additional million in sales or so. But not content to just gain controversial attention through Fair and Balanced yellow journalism, Bulletstorm has decided to pick a fight with the Call of Duty franchise. The developers have cobbled together the following game, which is recapped in the video below. If you wish to actually play it yourself, you can find it here. Go Team America!

UConn QB Johnny McEntee shows off his skills. Lead by some impressive QB play last season, UConn managed to win 8 games and take the Big East title en route to a Fiesta Bowl bid that did the school proud. And at each game, watching from the bench was Johnny McEntee–a red shirt junior who along with several other contenders will be fighting for the starting job after the graduation of QB Zach Fraser . This video makes a fairly compelling case for McEntee, especially if there is ever a situation where the team is facing a third and long and needs a three pointer. Although to be fair, that seems somewhat unlikely.

This video just screams fake, and yet no one has yet to conclusively prove how it was faked (despite a plethora of internet posters smugly typing “fake” and assuming that the case was therefore resolved). In this video, two separate people film a glowing ball of light hovering over the Dome of the Rock in Jerusalem. Immediately following the possibly sacred light, according to our totally scientific research, 348 people converted, 67 women claimed virgin births (oddly 62 of those claims from the girl’s boyfriends), and 5 countries declared war. It’s a miracle!

<SPOILER>Wrestling is fake. Crazy, right? Wrestling has always been something of a testosterone fueled soap opera for guys, and so it isn’t all that unusual to see the “sport” go off and do incredibly weird things. In the video below, these wrestlers are just…well, just watch for yourself. It is possibly the most bizarre wrestling video on the internet, and that is saying something.