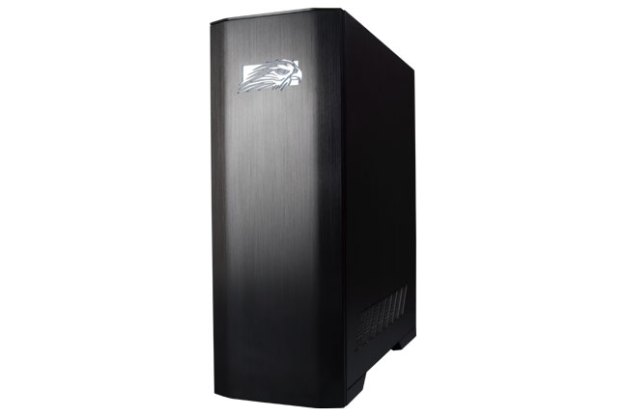 In the realm of flagship gaming desktops, Mach V is a name that means something. Falcon Northwest has been offering computers under the Mach brand name for years, and while the hardware obviously has changed, the purpose has not. The Mach V is at least a gaming powerhouse, and at most a tribute to the kind of computing excess only true geeks can understand.

You can grab yourself a Mach V for just a hair over $3,000 if you choose a AMD or Intel P67 platform. That’s a non-trival chunk of change, and much more expensive than the base configuration of competitors like the Maingear Shift and Origin Genesis. We’d argue, however, that those base configurations offer merely adequate performance. You need to select upgrades if you’re a serious gamer.

Falcon Northwest’s approach is different. Even the base Mach V P67 system has a liquid processor cooler and a GeForce GTX 570 graphics card. You simply can’t buy a Mach V that isn’t a performance monster.

Our review unit was no base model, however. Equipped with an Intel Core i7 3930K (overclocked to 4.5GHz) and two GTX 580 graphics cards in SLI, it represents the cutting edge of what’s currently available to consumers. The total price of our unit rings up to $5,688, which is staggering, but not surprising. The Origin Genesis we tested in June retailed for $5,499, and the iBuyPower Erebus reviewed in May was $7,670.

Let’s dive in and see if the Mach V can live up to its price.

The Mach V has only one case option, the massive black ICON2. Unlike the enclosures used by many other companies, this one is a custom solution crafted by Silverstone specifically for the Falcon Northwest Mach V.

In many ways it is similar to the Raven series, which is built by Silverstone for consumer purchase, and used by many PC manufacturers for high-end gaming and workstation computers. Like the Raven enclosures, the internal layout has been tilted so that the motherboard I/O panel faces upwards, allowing for better exhaust of hot air (heat naturally rises). The power supply resides in its own physically separate compartment and the hard drives are placed in the intake path, which means they’re kept cool without excessive use of fans.

The Mach V’s exterior is a clean design that doesn’t even offer a case window. One might think this could lead to boredom, but a light-up Falcon Northwest logo on the front of the case provides the dash of spice it needs. While the front panel door must be swung open to access the card reader and optical drive, all of the forward-facing ports (such as USB 3.0) are located on the front top edge of the case along with the power and reset buttons, providing a perfect combination of refinement and functionality.

A plethora of ports

Rotating a PC’s internal layout so that the motherboard I/O panel is at the top of the case seems as if it would be convenient for connectivity. However, doing so presents a problem – how do you protect those sensitive ports from damage? They’re now vulnerable to spills, falling objects, and the rumps of errant pets.

The ICON2 enclosure, like many cases that offer this layout, solves that issue by placing a guard over the I/O ports. While this protects them, it largely negates the ease of access to be gained from putting the ports up top. This is particularly true with the Mach V, because the I/O guard is stiff and takes a bit of effort to remove or replace. And don’t think that the guard completely protects the ports, because while it prevents direct contact of solid objects, it is perforated to allow for exhaust of hot air. Lidless glasses and the Mach V should be kept separated at all times.

There’s a total of eight USB 3.0 ports (including the two at the front), two eSATA ports, two Ethernet ports, and an additional four USB 2.0 ports. The only disappointment is video connectivity, as the GTX 580s only offer DVI. That’s a minor problem, however, because Falcon Northwest includes DVI-to-HDMI adapters with the system.

The Mach V is the first system that we’ve tested using one of the new Sandy Bridge-E processors, in this case the six-core Core i7-3930K, which has been overclocked to 4.5GHz. It is mounted to an ASUS P9X79 Pro motherboard and combined with 16GB of RAM as well as the mentioned GTX 580s in SLI.

In SiSoft Sandra’s processor arithmetic benchmark Intel’s new silicon proved itself by returning a combined score of 185.6 GOPS. Perhaps even more impressive, however, was the combined 7-Zip score of 37,608. This soars beyond the score of 24,916 that was provided by the Core-i7 2600K in the previously tested Falcon Northwest Fragbox. Clearly, the Mach V could double as a workstation if needed.

Most consumers will be buying this as an extreme gaming rig, however, so we tested it in Dawn of War 2, Just Cause 2, and Battlefield 3 at a resolution of 1680×1050. Even with all detail settings at maximum, frame rates of over 60 FPS were achieved. In fact, Battlefield 3 at Ultra presets returned an average of 111 FPS. Although a higher resolution would reduce that, this result indicates that the game should be playable at Ultra even on a 30-inch display.

In 3DMark 11 the Mach V returned a score of 13,675. While solid, the previously tested Origin Genesis, which was equipped with three GTX 580s instead of two, scored 14,616. In PCMark 7 a score of 6,038 was returned, which is again beaten by the Origin Genesis, though by a much closer margin – the Genesis scored 6,166.

We also tested the OS drive, which is a 128GB Crucal M4 SSD. In HDTach the drive returned an average transfer rate of 326.8 MB/s. This is among the quickest available among SSDs today, which isn’t surprising, as the M4 has received positive reviews when independently tested.

Keeping you warm at night

Given the performance of the Mach V, you’d expect a lot of noise. And that’s what you receive, particularly if you place this computer near to you. Because of that unique motherboard layout I keep mentioning, the exhaust fans have a clear path to your ear, unless you find some way to hide this mammoth underneath or inside something (which likely would not be wise, as it would decrease air flow).

Noise levels might have been less if the case allowed for the use of larger fans, but for whatever reason, no such addition is included. Adding more or larger fans would have spoiled the elegant case design, but would have allowed for lower fan speeds. There is a 180mm fan inside the case, but the main exhaust fan appears to be a normal 120mm unit.

However, the Mach V’s noise level doesn’t ramp up substantially once it is placed under load, even with two GTX 580s churning away. As a result, the noise level generated from the Mach V while gaming did seem reasonable. Less powerful systems are quieter but, well, they’re less powerful.

Heat also remains reasonable. Stress testing did not reveal GPU temperatures above 81 degrees Celsius, nor did it reveal CPU temperatures above 68 degrees Celsius. These results are far from the lowest possible, but remember, this computer uses a processor that is overclocked to 4.5GHz and combined with two of the most powerful graphics cards available today. Even with the overclock, this computer is well within safe temperature limits.

The Mach V is predictably awesome. Although the strange motherboard orientation does result in a number of drawbacks, it also allows for excellent cooling while keeping the fan count low. As a result, this computer is free to be a true design statement. It stands in contrast to most enthusiast systems, which are a mish-mash of fan mounts, LED lighting and ports. And if the monolithic black doesn’t do it for you, Falcon Northwest will be happy to paint your computer with a custom color or design (for a price, of course). I’ll take mine in rosso scuderia.

No game, not even Battlefield 3, was a challenge for this system at the resolutions we tested, and given how thoroughly the system creamed the games used for benchmarking, we doubt even a 30-inch display would give it much trouble (although gamers who need FPS to stay above 60 in all games will want to play at 1080p). For the rest of us, the Mach V (in this configuration) is overkill.

Unfortunately, the price tag of $5600 can also seem like overkill. We were able to configure similar systems on the websites of Maingear and Origin PC for about $600 less. In addition, the previously tested Origin Genesis did beat out the Mach V in 3DMark 11 (thanks to an extra GTX 580) while offering a similar as-tested price.

A great deal of this pricing difference likely can be laid at the feet of the new Intel six-core processor, which is more expensive than the Core i7-2600K found in many gaming desktops. Gamers are unlikely to extract much benefit from the additional cores, but as our incredible results in Sandra and 7-Zip showed, software that is optimized for multiple threads will run at blazing fast speeds on this computer. You don’t have to buy the X79 platform, and if you don’t, the Mach V’s price is more competitive – but still often a bit higher than other companies. As mentioned in the introduction, this is a system that starts at about $3,000 reasonably equipped, while other companies offer premium systems at $1300 with relatively unimpressive hardware. Quality, not value, appears to be the Mach V’s goal.

Falcon Northwest helps justify the price by offering excellent design, a great customer experience (via the warranty, extensive testing pre-ship testing and a portfolio of spare parts that ships with every system) and outstanding performance. It’s up to you to decide if you want to spend the extra money, but if you have the cash to buy a PC this expensive, rolling out a little extra to snag the Mach V could make sense.