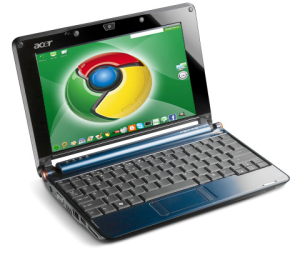 Little more than a year after Google first lifted the veil on its plans to challenge Microsoft Windows and Apple OS X with Chrome OS, the first hardware to support it is finally ready for launch. The Taiwanese paper DigiTimes reports that Google will release its own Chrome OS notebook, manufactured by Inventec, later this month. Acer and HP will also release Chrome OS notebooks in December.

November puts Google right on track for the “late 2010” time frame it has referred to over and over since introducing Chrome OS, but news that it will carry Google branding, ala the Nexus One, is new. The notebook will also stand apart from most Atom-based netbooks by using an ARM processor, potentially giving it startup times, battery life and performance more on par with that of a smartphone.

The first Chrome OS notebook will keep stay true to Chrome’s browser roots – it’s being developed for consumers who buy computers primarily to use the Web. The Linux-based operating system will mostly act as a glorified browser, relying on cloud-based apps like Google Docs to supply the functionality that traditionally comes from locally installed software.

Netbooks have taken a considerable hit since the introduction of tablets like the iPad. If Chrome OS “smartbooks” make a strong impression at the end of this month, it could reinvigorate the flagging market for low-cost notebooks.

Don’t expect to pick up a Chrome notebook at Best Buy anytime soon, however. Google won’t be shipping to retailers, instead selling the notebook online only at a price that has yet to be announced.