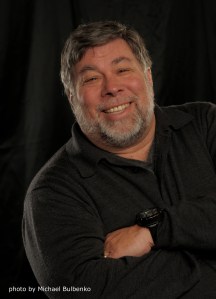 Steve Wozniak, the cofounder of Apple, will speak at Michigan State University’s Spring commencement on Friday, May 6 (Go green!). Speaking to the undergraduates, The Woz will also receive an honorary doctorate of engineering from the school for his work in designing the Apple I and Apple II computers and continued contributions toward computer education over the last 30 years. He currently holds a Bachelor’s degree in electrical engineering and computer science from the University of California Berkeley.

“Technology plays a critical role in the education of our students, so it’s fitting that Steve Wozniak will send our graduates off to careers that have been influenced by his innovations,” said MSU President Lou Anna K. Simon.

Wozniak speak to will speak at the 1 p.m. convocation, which will be held at the Jack Breslin Student Events Center, One Birch Road in Lansing, MI. It is expected that he’ll discuss the impact and success of the iPad 2.

In a recent speech, he spoke of the importance of the iPad and how it’s finally a computer for normal people. “I think Steve Jobs had that intention from the day we started Apple, but it was just hard to get there, because we had to go through a lot of steps where you connected to things, and (eventually) computers grew up to where they could do … normal consumer appliance things,” Wozniak said.

The commencement will be MSU’s second “green” graduation. All gowns and hats will be made of recycled bottles, while programs and diplomas will be printed on recycled paper.

(As an MSU graduate, I must say I’m a bit jealous I won’t be in attendance this year.)

Steve Jobs is still the man behind the curtain, despite medical leave