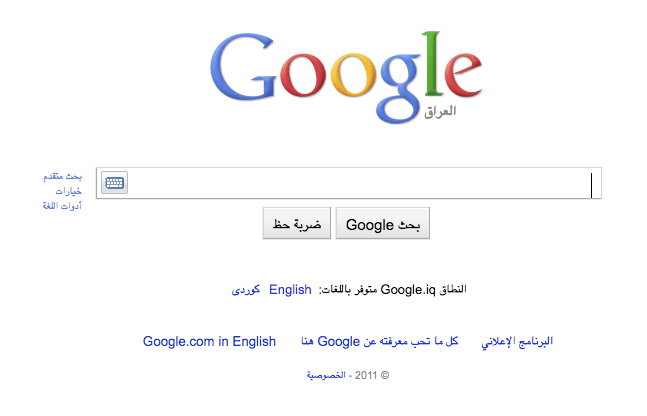 Google on Thursday launched the domains google.iq and google.tn provide regional, pertinent search results for the countries of Iraq and Tunisia respectively. Google had previously routed searches from Iraq and Tunisia through other countries. Now, an Iraqi searching for, say, a shoe store is more likely to find one that’s closer to his or her location. The two new additions mean that Google now has 184 local domains worldwide, with 15 of those in Arab countries.

” The new domains will help people in Iraq and Tunisia find locally relevant information, faster,”  AbdelKarim Mardini, Google’s product manager for the Middle East & North Africa, said in a blog post. “For example, a search for [central bank] on the Iraq domain yields results relevant to someone in Iraq, such as the Central Bank of Iraq. On the other hand, the same search on the Tunisia domain returns slightly different results.”

With the new domains comes better support for each country’s languages. In Iraq, Google users can now search in Arabic and Kurdish. In Tunisia, Arabic and French are now supported.

Google.iq and google.tn bring Google closer to its stated goal of covering the world’s top 40 spoken languages and 99 percent of all Internet users. The company says it plans to launch more domains in “the coming months,” but didn’t hint at what countries it was focusing on for those launches.

How to pin a tab in Google Chrome
This Chrome extension lets hackers remotely seize your PC
These new Zoom features take on Teams and Outlook in a serious way
This creepy Mac app can record every moment of your online life
This free service just hit a huge website security milestone
Best VPN services 2022: today’s top picks
This stunning DIY gaming PC dream machine is made of glass
Apple will pay $50M to settle the butterfly keyboard fiasco
This 15-inch Windows laptop is a great buy while it’s just $139
Get Samsung’s 49-inch Odyssey G9 Monitor for under $1,000 today
Why Starlink download speeds are experiencing double-digit dips
Hackers just stole LastPass data, but your passwords are safe
Best Chromebook deals: Get a new laptop from $99