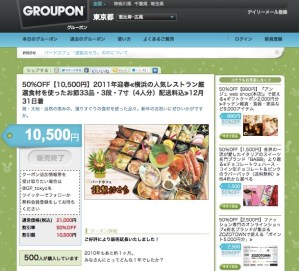 Japanese customers received a public apology from Groupon CEO Andrew Mason this morning, who admitted his daily deals site had “really messed up.”

A coupon for a traditional New Year’s meal went awry when an overwhelming demand resulted in late deliveries and food in “terribly conditions,” the AP reports. The meal, called “osechi,” is a symbolic dish also known for its aesthetic presentation. The disappointment led many Japanese customers – who had shelled out 10,500 yen, or $127, for the coupon – to take to the Internet, posting complaints as well as photos of the shoddily prepared meal.

According to Groupon, the café that had offered the coupon through its site was overwhelmed by the order volume and unable to meet the demand. But in addition to the apology, Groupon also refunded unhappy customers and offered 5,000 yen in vouchers.

Groupon has experienced significant success stateside in recent weeks, particularly with its unprecedented round of fundraising. The $950 million investment has solidified the company’s position and will undoubtedly fund its growth. The company has also been extending its reach in Asia, and last month acquired three popular coupon websites in Taiwan, the Philippines, and Singapore.

And while popularity isn’t typically an issue for any growing company, it was in this case. Mason explained that Groupon has created formulas to help vendors it partners with determine how to meet consumer demand, and how many coupons to offer. Unfortunately, this has not been introduced to Japan yet. “Basically because the popularity of Groupon Japan has grown so quickly it took us off guard. We weren’t expecting to run into this problem so quickly.”

Mason claims capacity planning is now being introduced to the Japanese staff.

Topics
Newegg sent steel weights instead of an RTX 4090, customer claims
Snapchat+ now lets you customize when Snaps on Stories expire
Dell XPS 13 is under $750 in rival October Prime Day sale
Don’t miss your chance to get a Dell 27-inch monitor for $150
The Galaxy Book 3 Ultra is Samsung’s most powerful laptop ever
Nvidia may have another monster GPU in the works, and the price could be outrageous
AMD’s Ryzen 9 7950X3D pricing keeps the pressure on Intel
What is ChatGPT Plus? Everything we know about the premium tier
ChatGPT Plus to bring priority access during peak times — at a hefty price
Usually $3,879, this Lenovo laptop is down to $1,479 today
Get this Asus gaming laptop with an RTX 3060 while it’s $400 off
All of Samsung’s videos from today’s Galaxy Unpacked event
Best 2-in-1 laptop deals: Save on Dell, Lenovo, HP and more