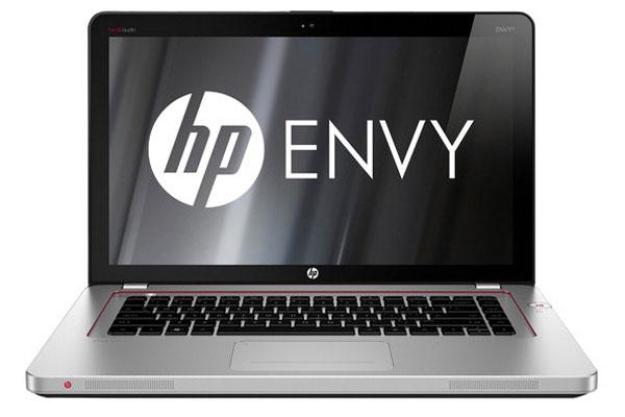 “The HP Envy 15 finally provides Windows users with a product that can go toe-to-toe with what Apple offers.”

For those who’ve missed out on the last few years of the Envy line, this is HP’s stab at the high-end consumer laptop market. Apple dominates in this market, often stripping away attention from perfectly good (or even great) high-end laptops running Windows — including older Envy laptops.

A new model provides opportunities to include new features, but internally the HP Envy 15 hasn’t changed much. Our review unit, which is a base model with a display upgrade, has a Core i5 2430M processor paired with 6GB of RAM and a Radeon HD 7690M discrete GPU. For this, you’ll have to pay $1099 – just $20 more than the Envy 14, which was $1079.

Certainly, this appears competitive at first glance, but the real news here is the external redesign. Keeping up with the gold standard (Apple) is an uphill struggle. Let’s see if HP has brought the right tools

From a distance, you’d have trouble telling the difference between the new HP Envy 15 and older models in the line. All of the design elements are the same. Most of the interior is light silver metal except the lid, which has a darker tone. An island-style keyboard is laid across the interior, and the touchpad blends into the chassis. This broad description could be used for most Envy laptops sold within the last two years.

Upon closer inspection, however, the differences become obvious. The flat black lid is an improvement over the subtle designs that decorated some previous models. Interior materials are slightly brighter than before, lending a less serious tone and providing better contrast with the keyboard, which features simple black keys. A touch of color has been added, as well, thanks to a small red strip of material that rings the keyboard.

The end result is both clean and functional. Striking? Not quite. Metallic laptops are starting to become a bit common, so the simple black-lid on silver-interior design of the Envy 15 is no longer enough to stand out from the crowd. Other new designs like the Lenovo U400 are more distinctive, but not more functional. This is a solid, well-built laptop that easily lives up to the expectations of luxury set by the price tag.

Two USB 3.0 ports and one USB 2.0 port flank the Envy 15’s chassis, making this one of the few laptops where USB 3.0 outnumbers the older standard. HDMI and DisplayPort outputs are included for external displays, and audio equipment can be hooked up to not one but two headphone jacks, as well as a single, separate microphone jack. A card reader rounds out this impressive suite of connectivity.

A pleasure to touch

As mentioned, this laptop uses an island-style keyboard. So did the older models, but this keyboard has been revised. It offers somewhat small keys with decent travel and a smooth cap, creating an overall experience that’s strikingly similar to the MacBook 15. Which is the point, we suppose.

The layout of the keyboard is conventional, but there’s no numpad. That’s unusual for a 15-inch laptop. It’s also a good decision. Laptops that attempt to cram in a numpad have to make sacrifices to do so. Either other keys need to become smaller, or the numpad is half-sized, making it difficult to use. Here, the keyboard layout suffers from no such issues. It is spacious and enjoyable to use.

The spacious touchpad on the Envy 15 is one of the better ones you’ll find on any Windows notebook, but still gets confused from time to time. For instance, two-fingered scrolling is almost MacBook smooth after you get it started, but we frequently had trouble getting it to recognize a scrolling motion. Laying a second finger in the “button” area while you’re moving the cursor usually induces a slight twitch, and getting the pad to physically click takes a bit more force than we’re used to.

Stock Envy 15s ship out with a glossy 1366 x 768 display, but our review unit came with the upgraded 1920 x 1080 panel, which will set you back $150. Given the huge increase in display resolution (the number of pixels nearly doubles) it’s not a bad price, but you can obtain a nice 1080p display for less with other laptops, such as the Sony Vaio S 15.5-inch.

Image quality didn’t grab us as instantly as did the Sony Vaio S 15.5-inch, perhaps because HP ships this laptop with much less visually stimulating wallpaper. Upon further use, however, it became apparent that display is well above average. Black levels are not excellent, but white saturation test images revealed excellent results, contributing to great overall contrast. Gradient banding test images were butter-smooth as well. Subjectively, both games and movies are beautiful on the Envy 15, though again not quite as good as the 1080p display on the aforementioned Vaio S.

HP has once again included Beats Audio branding on the Envy, and there’s a new extra this time: a volume control knob along the right side of the laptop featuring a Beats Audio logo. Branding aside, it’s a nice tactile extra that adds a touch of luxury and creativity to the design, not to mention more control than simple up and down buttons.

As for audio quality, well — it’s excellent. In fact, it’s probably the best we have ever heard from any laptop. Maximum volume is so loud that it may offend the sensibilities of some users, yet distortion is kept mostly in check, resulting in clear and crisp reproduction. However, the limits of laptop design are still apparent whenever you listen to a bass-heavy track. There’s just not much punch available. This holds true in movies and games, too — explosions sound a bit flat.

Fan noise persistently leaks from the HP Envy 15 no matter what you’re doing, even if you’re doing nothing at all. The fan never kicked off entirely during our time with it, and in most situations we were able to detect the noise of the fan if we tried. Fortunately the fan isn’t harsh and doesn’t whine, so you’ll simply come to ignore it after a few minutes.

The upside to the somewhat loud fan is cool operation. During low to moderate use the laptop’s chassis warmed only slightly in the usual spots, such as near the exhaust fan. Extended lap use is definitely an option. You’ll only become uncomfortably warm if you perform tasks that engage the discrete GPU. Doing that is a great way to keep warm in winter.

Heft is the first thing you’ll notice when picking up the Envy 15. The heavy use of metal that contributes to its luxurious feel and solid chassis comes at the price of weight. You’ll be packing 5.79 pounds extra when you travel with this laptop, which is just a tad heavier than your average 15-incher, but a far cry from the lightest in this category. The thickness of 1.1 inches isn’t class leading, either. This laptop is portable enough for occasional use, but would probably become a pain for someone who travels with their laptop on a daily basis.

Battery life is up to the task when you do decide to travel, however. Inside the chassis is an impressive 8-cell battery. This is much larger than average for a laptop of any size. As a result of the extra juice, this large and powerful laptop offers solid endurance. In our tests, it lasted two hours and one minute in Battery Eater Standard and six hours twenty one minutes in the Battery Eater Reader’s Test. These results are well above average for a powerful 15-inch laptop, though still behind the class-leading endurance of the MacBook Pro 15.

As stated earlier, the HP Envy 15 comes with an Intel Core i5-2430M processor and 6GB of RAM. All of that is rather mundane. More interesting is the Radeon HD 7690M discrete GPU. This is a new part just released by AMD, and it represents the most significant upgrade offered by this new model. It’ll be interesting to see how it performs compared to previously reviewed laptops including the HP Envy 14, which used the Radeon HD 6630.

First, let’s deal with the Core i5-2430M. We’ve seen this processor before, and it behaved as expected. SiSoft Sandra’s Processor Arithmetic benchmark returned a combined score of 38.26, literally right behind the Sony Vaio SE 15.5-inch, which scored 38.27. In 7-Zip the Envy 15 scored 7,806 MIPS, which is the second-highest score yet returned by a dual-core laptop.

PCMark 7 also had good things to say. It provided a score of 2,418, which is the highest score we’ve ever recorded from any laptop.

What about gaming? In 3DMark 11 the new Radeon proved itself by reaching a score of 1,272. For comparison, the Radeon HD 6630-powered Envy 14 and Sony Vaio S 15.5-inch only scored 954 and 997, respectively. 3DMark 06 returned a score of 8,953, which is again much better than laptops using older mid-range Radeon parts. In fact, both of these scores are new records among laptops we’ve reviewed.

Unfortunately, these great results are sapped by the 1080p display. The high pixel count puts great demand on the GPU, and though it can play most any game available at low or medium detail settings, real-world performance in the latest titles is a little disappointing at the native resolution. The Sony Vaio S 15.5-inch also suffered from this issue. Once you reduce a game’s resolution, however, the Envy 15 has no problem playing anything on the market today.

The evolution of the HP Envy line has been interesting to watch. It’s obvious that the engineers responsible for this laptop are learning as they go, improving the laptop with each version. With this new Envy 15 we see not only hardware improvements, but also a cleaner designer, a better keyboard and excellent audio. Battery life is impressive, as well. This laptop is far too large and heavy to be an ultraportable, but it has battery life on par with them.

Another important trait of this laptop, which is shared with the older Envy 14, is the lack of obvious faults. Nothing about the Envy 15 is jaw-dropping, but at the same time, there’s nothing wrong. All of the usual laptop pitfalls, like poor touchpad quality, small batteries and bad displays, are avoided entirely. The result is a good all-round laptop that is pleasing to use on a daily basis. No matter your interest — music, gaming, or productivity — this laptop can handle your needs.

This is the laptop that finally provides Windows users with a product that can go toe-to-toe with what Apple offers. In the areas of audio quality, display quality, and graphics performance the MacBook Pro is behind the Envy 15 – sometimes by a substantial margin. Yet Apple insists that you part ways with $1,799, while our review unit is only $1,249. And that is, by the way, with the 1080p display. The highest resolution available on the MacBook Pro 15 is 1680 x 1050, and choosing that option will raise the total price to $1,899. Only the issues of battery life (which is good, but not up to Apple’s high standards) and touchpad quality keep the HP Envy 15 from defeating the MacBook Pro 15 in every category.

Anyone looking for a luxurious and powerful laptop needs to check out the Envy 15. This is a laptop that trounces the PC competition and manages to be competitive with Apple’s offerings while costing hundreds less.