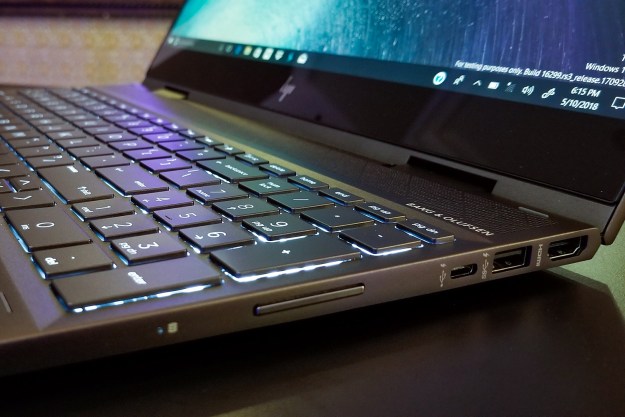 “The HP Envy x360 15 is a perfectly polished powerhouse.”

Stylish, powerful, and refined, the Envy x360 15 should be a dream. It’s convertible, supports tablets and inking, and has powerful internal components. You get the option of either a standard Intel offering or an AMD-powered model which includes Radeon Vega graphics onboard to boot. On top of that, it looks simply gorgeous.

A few quirks to the product left us scratching our heads, but we’re hoping production models iron out the wrinkles.

Premium as a master chef’s kitchen

The design is unquestionably premium: The Envy x360 is made from a smoked gray, CNC-machined aluminum (HP calls it “Dark Ash Silver,” even though it isn’t silver at all), and feels great in the hand. Cheap laptops are simply cases that hold components, frames for a screen and a keyboard. HP has carefully beveled the back edges and polished them to give the machine an angular profile, and a subtle “Damascus steel” pattern is etched into one of the faces. Damascus steel, HP notes, is commonly used in fancy chef’s knives, and often have a distinct pattern. Go check out your fancy knives, and you’ll see what it means.

Beyond just the material, there’s the 2-in-1 design of course. The Envy x360 has geared hinges that let you flip the screen around to enter either tent mode or full on tablet mode. At 4.85 pounds, it’s a bit heavy to carry around, especially compared to the lightweight 13-inch laptops that have become so popular, notably Dell’s XPS 13. To compete, HP offers the Envy x360 13, of course, which weighs just 2.87 pounds and has a Gorilla Glass 4 coating on its screen for added durability.

To talk about 2-in-1s is to talk about hinge design, which is a Thing. Microsoft made a point of underscoring the work that went into the fulcrum hinge on its Surface Book lineup, while the Lenovo Yoga 920 has a very different take on what a hinge should be. HP’s geared hinge – which actually has mechanical gears inside it, that mesh and ensure smooth motion – may not be the best of the bunch.

We often carry our laptop by the corner near the keyboard, an admittedly precarious way to treat a precision piece of equipment but a very common one nonetheless. The Envy x360’s hinge isn’t strong enough to support the screen like this, drifting slowly back until parallel before ultimately bending backward, 270 degrees from the keyboard. That ain’t good. It also means that the pressure of your finger from routine use of the touch display will gradual push the screen back toward the desk behind it. Again, not good.

We asked HP, which suggested the hinge was preproduction and the issue might be fixed before the unit finally ships. We hope so. That’s one small misstep in an otherwise beautiful design, of course.

Great for typing purists, despite an odd choice

Speaking of that beautiful design, the keyboard is fantastic. It feels great to type on, with a satisfying key depth that made this reviewer want to type and type. And it makes very little noise at all – although mechanical keyboard fanatics will lament the silence. People, please: Enjoy the silence.

But before you get to enjoying the keys, you’ll probably notice the keyboard and trackpad are weirdly misaligned, something HP swears customers prefer. The off-kilter keyboard accommodates a numeric keypad, which some will call a godsend and others will regard as an artifact. Who does data entry anymore? Because of the keypad, the resting position of your fingers on the ASDF and JKL; keys aligns you with the left half of the screen. And the touchpad is centered with them, rather than the center of the display.

It threw us off at first, but it’s something business-focused people will definitely appreciate.

The 4K screen – FHD resolution, meaning 1,920 × 1,080 pixels — is sharp and crisp and really bright. It caught our eye from across the room like a movie star. We didn’t have enough time to benchmark the system, of course — we’ll leave to our full review. But in our brief experience, apps launched promptly, and the entire system felt zippy. It’s worth noting that the Envy x360 turns on in the blink of an eye as well. Open the cover, and the system is instantly on and awake. It feels very responsive overall.

Support for inking via HP’s newest pens is a very good thing – and so are those pens. The latest models have tilt support, which lets you shade you in a sketch, and a button on the end that can launch apps via Bluetooth, a la Microsoft’s Surface pens. We didn’t have a chance to test this out, unfortunately.

The Envy x360 15 starts at $870 for a model with the 8th-gen Intel Core i5, 8GB of RAM, a 256GB SSD, and onboard UMA graphics. If you opt for AMD, you can the alternative of a cheaper configuration, starting out at $760, packing a Ryzen 5 CPU and 128GB of SSD storage. As a bonus, you should get some better graphics performance with the AMD option, pushing up to Radeon RX Vega 10 for the spendier configuration.

Best laptop deals: Save on Apple, Dell, HP and Lenovo
Best Chromebook deals: Get a new laptop from $99
The best laptops you can buy in 2022
2-in-1 laptop Black Friday deals: Dell, HP and Microsoft from $99
Mass shipment of Apple’s mixed-reality headset may be delayed
4 tech collabs we want to see on the OnePlus Featuring co-creation platform
This 67W charger is an Apple fan’s retro dream come true
This 38-inch curved Alienware monitor is $450 off (51% claimed)
Alienware teases a monster new 18-inch laptop ahead of CES
Here’s what I’ve learned after using the Quest Pro for one month
Nvidia may finally admit its major mistake with the RTX 4080
These Chrome extensions will put cash-saving coupons right in your browser
The best GPU benchmarking software