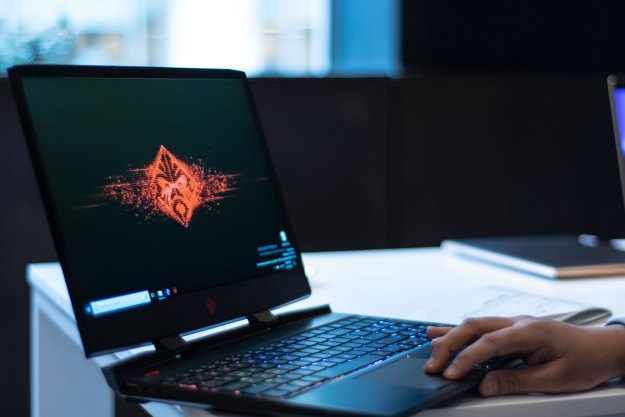 “With the latest Nvidia graphics, and a 240Hz display, the Omen 15 wants to be the new king of high-performance of gaming.”

Many consumers often associate the best gaming laptops with brands like MSI, Alienware, or Republic of Gamers, but don’t forget about HP’s Omen brand. Ever since 2014, its Omen laptops have enticed gamers with thin bezel displays, powerful graphics, and affordable prices.

Now comes the 2019 Omen 15. With new features like the latest Nvidia graphics cards, a whopping 240Hz display with 4ms response times, the Omen 15 looks to make some noise and disrupt the gaming laptop market.

Plenty of power inside with NVIDIA’s new graphics

Throughout 2018, most gaming laptops come equipped with Nvidia’s 10-series graphics cards. That includes the Nvidia GeForce GTX 1070 Max-Q graphics cards from last generations Omen 15, which powered a lot of thin-and-light gaming laptops like the Razer Blade 15. HP is now one of the first laptop makers to make the jump to Nvidia’s latest graphics.

For 2019, the Omen 15 picked up the option for Nvidia’s latest-generation graphics. The desktop versions of these received big hype and moving it to laptops promises for a jump in gaming performance.

The latest GeForce desktop graphics cards are powered by the Turing GPU architecture and the all-new RTX platform. This claims for six times more performance over previous generations and adds in support for real-time ray tracing and AI to gamers, but it remains questionable if these features will come over to the laptop. Until we know more from Nvidia, we’ll be left wondering whether ray tracing will be left solely to the latest Nvidia desktop cards.

With all that graphics power inside, we were a bit worried about the cooling on the HP Omen 15. We did notice something that caught our attention, even in just our short amount of time with the device. When we opened web pages and multiple programs on our demo unit (with Intel Core i7-8750H processor and GTX graphics), the laptop got noisy, the fans spinning up a bit prematurely. That’s not what you want in a gaming laptop.

HP says it has redesigned the thermals to accommodate the new Nvidia’s latest graphics, so we’re hopeful that these redesigned thermals means properly-cooled internals and less fan noise. We’ll have to wait and see.

A display that will light up your games

The move up to latest Nvidia graphics is a big jump for the HP Omen, but so is an important change to the display. It now comes with an option for a 240Hz display with a 4ms response times. This is rare in a gaming laptop, and we haven’t yet seen one with such a configuration. The lower 144Hz refresh rate is much more common, such as in the Razer Blade or the Alienware m15.

Overall, the 240 Hz display promises gaming monitor-level quality. It should mean for a noticeable change in perceived sharpness in games like Battlefield V and can also lead to less screen tear and reduced lag while gaming. Very few games might even actually support this or go up to high level of framerates for such a screen. However, it seems promising, especially if the latest graphics can push framerates higher than we’ve seen in the past.

Again, our hands-on unit wasn’t equipped with the 240Hz display, and we weren’t provided details on which configurations of the Omen 15 will come with it. HP told us that models with the display will be shipping in July. Some of the configurations will also support G-Sync, though again, we don’t know the specifics yet on how much that sought-after feature will cost.

For 2019, the HP Omen 15 laptop looks the same on the outside, and that’s not necessarily in its favor. There are no significant changes between generations. It keeps the same ability to upgrade the RAM, and SSD, and brushed aluminum top case and textured plastic display lid.  Sure, it is solid and there is little flexing, but that is now a bit outdated to slim and light gaming laptops like the Razer Blade 15. For instance, last year’s Omen 15 is 5.56 pounds and just 1.02 inches in thickness, and the Razer Blade 15 is half that at 0.78 inches thick.  Even the Alienware m15 beats out the Omen, coming in at 0.705 inches in thickness.

The keyboard and trackpad on the HP Omen 15 are also unchanged from previous models. It still doesn’t feel as solid or clicky as something from an Alienware laptop, but it produces feedback that was good enough for us to speed through typing in Microsoft Sticky Notes. HP keeps to a basic island-style layout and though backlit with four lighting zones, and we didn’t find any dedicated macro buttons. That is a shame since this is a feature that gamers often look for in laptops. This also isn’t per-key RGB lighting, and the four zones are still less than the Alienware m15’s six zones of lighting.

Other than the keyboard, it is always nice when a gaming laptop has a good selection of ports, and the HP Omen 15 has that covered. It comes three USB-A 3.0, one USB-C (with DisplayPort and Thunderbolt 3 support on select models), HDMI, RJ45, mini-DisplayPort, and dual audio jacks. Most are located on the back, which keeps things out of the way and helps for cable management.

The 2019 HP Omen 15 will be available in March for prices starting at $1,370. HP wasn’t specific on which GPU this model will include but notes that it will come with “Nvidia graphics,” the Intel Core i7-8750H processor, 16GB RAM, and a 1TB HDD with a 128GB SSD. A model with the 240Hz display is expected to become available in July.

Best laptop deals: Save on Apple, Dell, HP and Lenovo
Best Chromebook deals: Get a new laptop from $99
This stunning DIY gaming PC dream machine is made of glass
The best laptops you can buy in 2022
This free service just hit a huge website security milestone
Best VPN services 2022: today’s top picks
Apple will pay $50M to settle the butterfly keyboard fiasco
This 15-inch Windows laptop is a great buy while it’s just $139
Get Samsung’s 49-inch Odyssey G9 Monitor for under $1,000 today
Why Starlink download speeds are experiencing double-digit dips
Hackers just stole LastPass data, but your passwords are safe
Best MacBook deals: Save on MacBook Air and MacBook Pro
Best Dell XPS deals: Save on XPS 13, XPS 15 and XPS 17