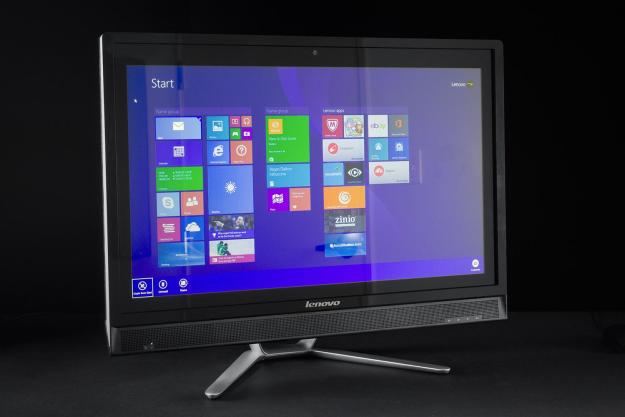 “Though the C560 Touch lacks a standout feature, it also lacks any serious flaws.”

Affordable all-in-one computers can be tricky for manufacturers to pull off. Over the last few years, a number of sub-$1,000 rigs have passed through our offices, but only one, the Gateway ZX4970-UR22, has received our recommendation. Lackluster hardware and questionable design choices often taint these basic, budget-friendly systems.

However, Lenovo may have a contender with the C560 Touch. This 23-inch all-in-one retails for an affordable $779, but features a 1080p touchscreen, an Intel Core i3-4130T processor, and 8GB of RAM. These are solid specifications for a system of this size. A quick look at Newegg.com tells us that most competitors have either a mobile Intel Core or Pentium processor.

There’s more to a system than its spec sheet, however, particularly when it comes to all-in-ones. Good hardware offered at a low price often comes with sacrifices elsewhere, like the display or speakers. So is the Lenovo C560 an exception to this rule?

The C560 Touch screams basic from the moment it’s unboxed. Plastic is the material of choice for everything here, aside from the sturdy metal base. A thin strip of silver along the edge of the system provides a hint of class. While it’s not part of the ThinkCentre line (Lenovo’s business desktop brand), the C560 could fit right in at your office, and could even serve as a point-of-sale terminal.

Though the C560 isn’t exactly an eye-catching looker, it’s surprisingly stout. All the plastics are thick, and the metal stand permits only the slightest wobble if the system is nudged. That’s a great trait for a touchscreen PC. You don’t want the display to shimmy every time you poke it.

Around back, you’ll find the C560’s secret weapon; a snap-off panel that offers access to the hard drive, RAM and optical drive. The hard drive bay accommodates a 3.5-inch drive, which means you could potentially increase storage from 1TB (which is what’s found in our review unit) to as much as 4TB. Upgrade-ability is not unheard of among AIO desktops, but few make switching components as easy as it is with the C560.

The system fails to provide robust user controls for the display, however. Buttons for brightness and volume, which are conveniently located on the bottom right corner of the bezel, are the only functions. Color temperature, contrast and gamma cannot be adjusted through the display.

Connectivity is also limited. There are six USB ports in total, but only two of them are 3.0. Other than that, you’ll find an HDMI-out, Ethernet and a 6-in-1 memory card reader. Wi-Fi is built in, but does not support 802.11ac, which is the latest Wi-Fi standard. Bluetooth connectivity is not included either, though a DVD-RW drive does ship with the C560.

At first glance, the C560’s 1080p touchscreen looks dull. The glossy display and somewhat dim backlight (we recorded a maximum output of 246 lux) fail to create a favorable first impression. Using this AIO in a bright room is like watching television through a mirror.

The Lenovo C560 Touch is a good value, and isn’t that what you want from an all in one desktop PC?

However, when placed in a dim room, the C560’s display is much easier to deal with. We measured a gamut that covers 89 percent of sRGB, and a maximum contrast ratio of 650:1 at peak brightness.

These traits, along with deep blacks and reasonably good color balance, make this system a solid choice for watching high-definition movies. We wish the C560 offered HDMI-in, a Blu-Ray drive, or a TV tuner. Such features could allow the C560 to double as a competent, pint-sized do-it-all TV.

Audio quality is respectable. The built-in speakers struggle to offer decent stereo sound staging, and are a bit muddy in the mid-range. However, some bass is noticeable, and distortion is low. Maximum volume is high as well, so it’s possible to enjoy a movie even if you’re sitting on the other side of the room.

Our review unit is armed with an Intel Core i3-4130T, a dual-core CPU clocked at 2.9 GHz. This is an interesting processor, because it uses less power than most desktop CPUs, but is quicker than a mobile-class chip. Here’s what happened when we threw SiSoft Sandra’s Processor Arithmetic benchmark at it.

In fact, the C560 is the quickest dual-core system we’ve ever tested with this benchmark. Only the Dell Inspiron One 23, which we reviewed with a quad-core CPU (and a higher price), can easily defeat the C560.

Here’s what happened when we ran 7-Zip, a processor-intensive benchmark based on the popular file compression utility, on the C560.

These scores are similar to the SiSoft results, but the Inspiron One 23 jumps even further ahead with its score of 19,054. This is to be expected, since 7-Zip is a benchmark that relies heavily on multi-threaded performance, which takes advantage of multiple CPU cores. The C560’s two quick cores can only take it so far. On the other hand though, its score of 7,436 is far ahead of the Acer Aspire Z3, which only scored 4,700.

Next up is the PCMark8 storage test, which gauges how well a system’s hard drive performs. This is an area where some all-in-ones falter, especially budget systems, as they’re typically equipped with cheap 5,400 rpm hard drives. We excluded the Acer Aspire Z3 from this portion of our analysis, because we didn’t use PCMark8 when we reviewed it.

Here we see a close contest between the Lenovo C560 Touch, which scored 2,698, and the Gateway ZX4970-UR22, which scored 2,447. In practical terms, these scores are a tie. Meanwhile, the Dell Inspiron One 23 leave both in the dust, earning a score of 4,682 thanks to its solid state drive.

Next up is 3DMark, a synthetic graphics benchmark that provides an indication of how a system will handle 3D games.

Then there’s the Dell Inspiron One 23. While most versions of this system ship with Intel HD 4600 integrated graphics, our review unit, which was a high-end variant, had an AMD Radeon HD 8960M dedicated graphics card. As you might expect, it absolutely devastated the competition.

So does the C560’s low 3D Mark score mean that it can’t handle games? To find out, we booted up League of Legends, a popular online game that has modest system requirements.

A keyboard and mouse come bundled with the C560 Touch, both of which are pretty barebones. The keyboard serves up a standard layout, and the mouse has three buttons, one of which is the scroll wheel. Both peripherals are wired, and the mouse uses infrared technology, rather than a more expensive (but more responsive) laser sensor.

Still, the peripherals do their job. The keyboard’s layout is spacious, and the mouse has a heftier in-hand feel than those bundled by some competitors. Most users will be perfectly satisfied with what ships with the C560.

The C560’s fan is always audible, but noise level peaks at an extremely low 35.6 decibels, even when the system is under heavy load. Most users will find the C560’s fan noise to be more than tolerable.

We also noted the familiar grind of the mechanical hard drive during testing. Though it did not exceed the fan’s volume, the short, harsh sound was easy to notice whenever files were transferred to or from the drive. Still, this is a quiet system overall.

According to our wattmeter, the C560 Touch consumes up to 39 watts at idle. That’s nine more watts than the Acer Aspire Z3, but only two watts more than the HP Spectre One. Lenovo’s AIO isn’t the most power-efficient one around, but it’s far from being a power hog when at idle as well.

Stressing the system with heavy CPU and GPU load increased power draw to 83 watts, however, which is high for a dual-core desktop. The Acer Aspire Z3 consumed no more than 46 watts, and the HP Spectre One needed no more than 72 watts. High power draw is the downside to using a system with a relatively quick processor.

Lenovo is an odd duck in the PC world, because it still ships numerous utilities with its consumer-oriented desktops. The hub for these extras is the Lenovo Solution Center, a no-nonsense interface that can help you back up data, scan for hardware problems, and more.

Quality is a mixed bag though. The interface is easy to navigate, but individual features can be hard to understand. Take the “hardware scan” option, for example. What does it do, and why you should you run it? The software doesn’t provide an obvious answer to either question.

The system also came with a very annoying copy of McAfee Internet Security, which constantly spawned pop-up warnings, and other annoying desktop spam. Buyers should kick it to the curb by uninstalling it as soon as possible. AVG and ZoneAlarm provide free anti-virus and firewall options, both of which are more than capable of fulfilling their roles.

The Lenovo C560 Touch we reviewed is a high-end configuration. The system starts at around $550 for the most basic version, which is over $200 less than the $779 as-tested price. This pricing clearly puts the C560 in the same league as the Gateway ZX4970-UR22, which is the first budget AIO to impress us in years.

Comparing the two systems doesn’t cast the C560 in the best light though. While Lenovo’s entry offers better processor performance, it otherwise ties or falls behind the competition. The Gateway’s X-factor is its display which, though dim, offers a very wide color gamut, slightly better contrast, and even deeper blacks. Plus, the 21.5-inch Gateway sells for just $449!

That comparison isn’t entirely fair, however, because the Lenovo C560 Touch has a larger 23-inch display. Similarly sized competitors that are sold for around $750 are often held back by a slower processor – and that includes Dell’s Inspiron 23 One. Though it blew away the C560 in our benchmarks, the Inspiron 23 review unit we tested costs almost double. The $799 version of the Inspiron 23 has an Intel Pentium G2030 processor with only 4GB of RAM.

Lenovo’s affordable C560 Touch reaches “Recommended” territory in our book, but just barely. While the system has drawbacks, like limited connectivity and an unattractive exterior, it pulls through with a decent display, loud audio, and solid performance. On top of that, it’s offered at a reasonable price.

In short, the Lenovo C560 Touch is a good value, and isn’t that what you want from an all in one desktop PC?

Best Chromebook deals: Get a new laptop from $99
This stunning DIY gaming PC dream machine is made of glass
The best laptops you can buy in 2022
The best Black Friday laptop deals for 2022
This free service just hit a huge website security milestone
Best VPN services 2022: today’s top picks
Apple will pay $50M to settle the butterfly keyboard fiasco
This 15-inch Windows laptop is a great buy while it’s just $139
Get Samsung’s 49-inch Odyssey G9 Monitor for under $1,000 today
Why Starlink download speeds are experiencing double-digit dips
Hackers just stole LastPass data, but your passwords are safe
Best laptop deals: Save on Apple, Dell, HP and Lenovo
Best MacBook deals: Save on MacBook Air and MacBook Pro