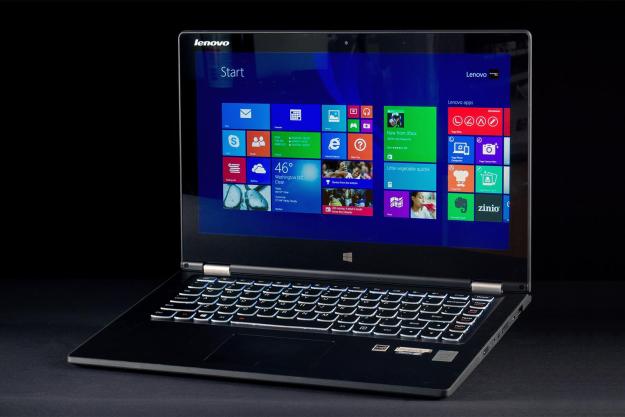 “The new Yoga 2 boasts a 1080p touchscreen and 4th-gen Intel processor, but it doesn’t keep pace with the latest from Acer, Dell and HP.”

The Lenovo Yoga, a thin, 13-inch convertible with an IPS display, was an early poster child for what touch functionality might bring to the PC. As time passed, and as the Yoga aged, it started to slip. The 1600×900 display went from cutting-edge to old news, and the unique folding hinge became stale.

Now, we have a proper sequel to the original with the Lenovo Yoga 2 13. We say “proper” because Lenovo did release the Yoga 2 Pro – but unlike the original, the Pro flaunted an intimidating MSRP of $1,199. The new Yoga 2 13, which starts at $899, is much more affordable.

Laying down that cash will net you a notebook packed with an Intel Core i5-4200U processor, 4GB of RAM, a 500GB mechanical hard drive with solid state cache, and a 1080p touchscreen. These specs make the Yoga 2 better than the original by every metric aside from RAM. The original Yoga offered the same amount, but you can upgrade to 8GB.

The convertible landscape has changed over the last two years, however. Newcomers like the HP Spectre 13t x2 and Acer Aspire R7 have shown that good convertibles come in many shapes and sizes, and Dell has drastically cut the price of the XPS 12, which now starts at $999. Is the Yoga still uniquely useful, or is it just another member of the crowd?

Early versions of the Yoga, which wore a screaming shade of orange, emulated brightly clothed yoga instructors you might have seen on daytime self-help shows. However, our Yoga 2 review unit is covered in a modest shade of black that’s suitable for a funeral. Orange is still available, but it’s no longer carrying the brand’s banner.

We’re disappointed by this turn of events. This is a notebook that should be playful – orange, purple, blue, whatever, just so long as it’s bright. Going dull eliminates the original’s inviting attitude, and doesn’t do the chassis, which is constructed from various types of plastic, any favors.

Spending some time with the Yoga boosted our impressions, however. The plastics are solid, and the interior features a pleasing soft-touch coat that’s similar to what’s found on the Dell XPS line and some older Lenovo ThinkPads as well. Handling the system reveals no sign of chassis weakness, which is good – this is a convertible, after all.

Connectivity is limited, however. There are two USB ports, only one of which is 3.0, along with mini-HDMI, a combo headphone/microphone jack and a 2-in-1 memory card reader. An Ethernet port is not included, and the Wi-Fi adapter supports 802.11n instead of the newer, faster 802.11ac standard.

Lenovo has a long history of employing stellar keyboards in its notebooks, but the company has recently put its track record in this area at jeopardy. The current “AccuType” keyboard design used by Lenovo can be hit-or-miss and, in this case, it’s an undeniable miss.

Using the touchpad was such a hassle that we found ourselves opting for the touchscreen whenever possible.

Typing causes the keyboard to flex like a trampoline, key feel is vague, and the layout significantly shortens several right-side keys (like Backspace) to fit in an extra column that includes Home, End and Page Up/Page Down. This isn’t the worst keyboard we’ve seen lately, but it’s also far from the best.

The keyboard backlight is a standard feature and offers mixed results. The unique design of the AccuType keyboard, which leaves a very small gap between each key cap as well as the plastic beneath, almost entirely eliminates light leak. That’s great, but there’s just one brightness setting. Think it’s too dim or too bright? You’re out of luck.

The touchpad, which is about 3.5 inches wide and 2.5 inches tall, is another sore point. The integrated left/right buttons lack tactile feel, and the surface feels cramped when trying to multi-touch scroll through webpages.

Using the touchpad was such a hassle that we found ourselves opting for the touchscreen whenever possible. We found it to be responsive, and the display’s thick bezels provide ample room to hold the Yoga when used as a tablet.

We were annoyed by the system’s size, however. At .68 inches, it’s far from the thinnest convertible around. This problem is exacerbated by the keyboard, which lingers on the rear of the device when it’s used as a tablet. These issues make gripping the Yoga 2 comfortably a difficult affair in this mode.

The display steps up

One of the original Yoga’s best features was its 1600×900 IPS touchscreen. At the time, 1366×768 was the common screen resolution, and many screens used the less impressive TN-panel technology. Today, however, 1080p IPS is standard.

To keep up, the Yoga 2 flawlessly makes the leap to full HD. In our testing, we found that the display can manage an astounding contrast ratio of 850:1 at maximum brightness, and that figure shoots up to 960:1 if brightness is lowered to 50 percent. The display also renders 95 percent of the sRGB gamut, and provides deep blacks.

Subjectively, these traits make for an excellent viewing experience. Web pages appear brilliant and clear, while videos and games have the deep, vibrant look that only high contrast can provide. We also noted reasonably accurate colors, and good sharpness.

Not everything’s perfect though. We saw uniformity issues along both the left and right side when viewing a few very dark images. Glare is an issue too, as the glossy display is offset by a backlight that manages to put out only 265 lux. That ties the HP Spectre 13t x2, but is well short of the ASUS Trio’s, which manages 364 lux, and the Dell XPS 12, which can reach 352 lux.

Audio quality is surprisingly strong. While the system is never loud, even at maximum volume, there’s enough sound to fill a small room. The lack of low-end makes the speakers better suited for dialogue than action movies, however.

Fast, for a convertible

On the benchmarking front, we kicked off with SiSoft Sandra’s Processor Arithmetic benchmark, a solid and simple test that provides a good sense of relative performance. We pit the Yoga 2 13 against other convertible and dockables, like the Acer Travelmate TMX313, the HP Spectre 13×2 and the Acer Aspire R7.

Here, the Yoga 2 compares well. The Core i5-4200U processor is far from the quickest available today, but some competitors have to make due with even less powerful hardware. The Travelmate TMX313, for example, has an Intel Core i3-3229Y clocked at only 1.4 GHz.

Next up is 7-Zip, another processor benchmark, though this one is particularly focused on multi-thread performance.

The results are similar. However, in this case, the Acer Aspire R7 is slightly ahead of the Yoga 2, rather than slightly behind. Lenovo’s new convertible is still clearly ahead of the TMX313 and the Spectre 13t X2.

But what about storage performance? Our review unit lacked a solid state drive, and instead made do with a hybrid arrangement that pairs a 500GB mechanical disk with an SSD cache. PCMark 8’s storage bench revealed the grisly details.

How’s that for a reversal? Suddenly, the Acer TMX313 and Spectre 13t X2, which have SSDs, blow away the Yoga 2 and the Acer Aspire R7, which don’t. Users concerned about storage speed will want to look elsewhere.

To test 3D performance, we loaded up 3DMark. The Yoga 2 isn’t meant for gaming, of course, but it should at least be able to compete with other convertibles.

Here, the Yoga 2 13 scores well compared to the TMX313 and HP Spectre 13t x2, both of which use a much slower version of Intel’s HD graphics. The Acer R7 is quicker, but only barely. None of these convertibles are great for gaming, but the Yoga 2 can at least handle some 3D titles.

The Yoga should try some cardio

The Yoga 2 weighs in at 3.65 pounds as tested (3.43 if you upgrade to a solid state drive) and, as mentioned, is .68 inches thick. These figures are not bad for a notebook, but they’re awful for a tablet. HP’s Spectre 13t x2 is a bit thicker and heavier with the keyboard attached but, because the keyboard can be removed, it weighs only 2.18 pounds, and is only .44 inches thick when in tablet mode.

Bulky dimensions might be excusable if endurance was excellent, but the Yoga 2 13 is only average in this area. Here’s how battery life stacks up in the Peacekeeper web browsing benchmark.

None of these systems convincingly best any of the others here, and the Yoga 2, which lasted five hours and twenty-nine minutes, is just average. We didn’t come anywhere near Lenovo’s quoted lifespan of eight hours. However, under the perfect conditions, it might be capable of reaching that mark. We think five to seven hours is a more likely range depending on how you use the system, and what display brightness settings you use.

Fan noise is the Yoga 2 13’s constant companion. At idle, it produces 40.2dB of ruckus, which is tolerable, but always noticeable. At load, the system spikes noise levels up to 44dB, which ties the Acer TMX313, but exceeds the Acer Aspire R7 by three decibels. The Spectre 13t x2 is passively cooled, and therefore silent.

However, external temperatures are high. The bottom warms to a toasty 99.9 degrees Fahrenheit at idle, and can hit 111.2 degrees, even at idle. That’s the highest figure we’ve gotten from a dual-core system since the Samsung SmartPC Pro 700T, which we reviewed over a year ago.

Overall, the Lenovo Yoga 2 13 should be called the Yoga 1.5. While it’s certainly better than its predecessor, the new model feels like an incremental update. That wouldn’t be a problem if the Yoga was frequently updated, but we’ve been waiting well over a year for a new entry-level model, and what a year it has been.

Everyone but Apple has a convertible on the market, and some competitors, like the Dell XPS 12 and HP Spectre 13t, are remarkably competent. Comparing the Yoga 2 13 to these alternatives results in a mix of pros and cons. The new Lenovo is powerful, and has a great display, but it’s hampered by a slow hard drive and an unpleasant keyboard.

The biggest problem is the Yoga’s core concept; a 360 degree display hinge. This design leaves the keyboard exposed during tablet use, and makes the device thicker and heavier than it needs to be. In 2012, the hinge was fresh, unique and innovative. Today? It just feels dated.

The best mouse for Mac 2022
The best mesh Wi-Fi systems for 2022
The best cheap printers for 2022
New feature shows that even Twitter wants to be like TikTok now
SSDs could be as cheap as HDDs in time for Black Friday
These new Eero PoE devices are for serious Wi-Fi setups only
Google’s new privacy tool lets you know if your personal info was leaked
Nullmixer is a nasty, new Windows malware dropper
How to leave a team on Microsoft Teams
Nvidia addresses the rumors about the RTX 40 GPUs’ power consumption
Intel says Moore’s Law is alive and well. Nvidia says it’s dead. Which is right?
Best Microsoft Surface Pro deals for October 2022
Logitech’s new Mac accessories are customizable, functional, and undeniably pretty