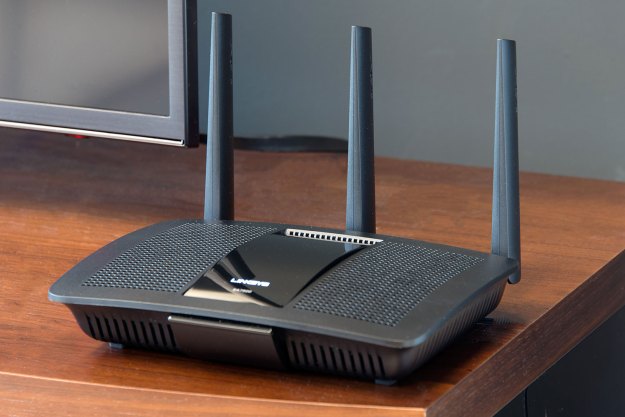 “Power and ease of use come together in the Linksys EA7500.”

Most of us only think about our router when it’s not working. When the Wi-Fi goes down we unplug the router, plug it back in, then hope our precious, life-giving Internet is flowing once again. If it is, we immediately go back to not thinking about our router.

If you’re happy with your Wi-Fi signal, that might be enough. But increasingly, people aren’t. Dead areas in homes are a frequent frustration, and activities like 4K streaming and video conferencing can stretch Wi-Fi bandwidth and reliability to its breaking point.

Linksys is hoping you’ll consider the EA7500 as a solution to these, and other, problems. It’s a $200 router powered by a 1.4 GHz dual-core processor, offering up to 1.9Gbps of bandwidth you can use across multiple devices. That’s enough bandwidth to handle a home full of streamers and gamers. Better still, the router’s use of MU-MIMO means the signal is directed directly at those devices, instead of being scattered across the entire house.

It’s an impressive feature set, but can this Linksys router solve your Wi-Fi problems? Is it simple enough for everyday users to set up on their own? And if so, is it worth the $200 price tag?

A big black box with antenna

The EA7500 is a plastic black box that’s not trying to make any visual statements. Sure, the adjustable wing-shaped antennas wouldn’t look out of place on a sci-fi set, but the rest of the router looks like any other piece of network equipment.

That isn’t to say the EA7500 fails to stand out. It does, but mostly because of its size. Users need to make room for this router. It’s ten inches wide, seven inches deep, and two inches tall, with three seven-inch antenna coming out the back. It easily takes up twice the surface area of most home routers.

The router also features a curved top, something anyone who tries to stack it amongst other networking equipment or home theater devices is going to be annoyed by. But this is a feature, not a bug. Wireless routers work best when left out in the open, meaning that stacking things on top of one is a bad idea if reception is important to you. And if it’s not, why would you being buying a router?

All the ports you’ll ever need

The back of the EA7500 has five Gigabyte Ethernet ports. One is a WAN port for connecting to your modem, and the others are LAN ports for connecting other wired devices. There’s also USB ports — one USB 3.0, another USB 2.0 — for plugging in external storage and sharing it over the network.

With this router, your Internet connection is more likely to be the bottleneck than your Wi-Fi signal.

This isn’t the highest bandwidth we’ve seen in a route. That distinction goes to the Nightgear Nighthawk X8, which offers 5.3Gbps of total Wi-Fi bandwidth across three channels. But that device is a staggering $400, twice as much as the EA7500.

After setting up the EA7500, you will see two different Wi-Fi networks, one on the 2.4GHz channel, the other on 5GHz. The split spectrum requires that users strategize a bit. The 5GHz channel should be used for bandwidth-hungry devices, such as 4K streaming media boxes, that are near the router and will benefit from the 1300mps speed. This leaves the 2.4GHz channel, with its not-too-shabby 600Mbps, is freed up for day-to-day computing and web browsing.

This configuration, just one of many, means the connection on your phone or laptop isn’t slowed when you’re watching Netflix on your smart TV. Alternatively, if you’re in a house with lots of rabid Wi-Fi users, you could simply switch from one network to the other when things slow down.

The Linksys EA7500 specifically directs its signals to connected devices using MU-MIMO, or beamforming. A normal router actually broadcasts its signal in every direction, which is effective, but results in poorer signal strength. MU-MIMO beams the signal towards the target device, instead. It’s a solid feature that’s still found only on routers near the upper end of the market.

If you’ve a bunch of devices simultaneously using a lot of bandwidth, this router should be able to handle it. Assuming every device is within range, your Internet connection speed is more likely to be the bottleneck for speed than your Wi-Fi signal. Most people lack a connection that can deliver anything close to 1.9Gbps, or even 600Mbps, the maximum speed of the 2.4GHz channel.

That’s a lot of features and specifications, but will users notice the difference compared to their current routers? Based on my experience – yes!

There are many potential reasons for a spotty Wi-Fi connection, but at my place the problem is competition. I live in a narrow, three story townhouse, meaning most of my walls are shared with neighbors. Every 2.4GHz channel is congested somewhere in the house. It’s a constant battle for spectrum and bandwidth.

A novice user who wants to configure something has a fighting chance of doing so.

The EA7500 gave me a huge edge in that fight. After setting up this router I couldn’t find any place where a neighbors’ network was stronger than my own, meaning the end of Wi-Fi dead spots. Latency in video calls and gaming stopped being an issue, and video streaming was also smooth. This was particularly true when I connected to the 5GHz network. Non of my neighbors are using this technology yet, meaning I’ve got that part of the wireless spectrum to myself.

But having a choice is also crucial here, because the 2.4GHz offers better range. Connected to this network, leaving my house didn’t seem to be much of a problem. Even my back yard was covered. At one point I managed to (just barely) connect and send a Hangouts message from my mailbox, which is half a block away.

Obviously every location is different, and every house is going to present unique challenges for wireless connectivity. Some places have thick plaster walls, others have a cluttered wireless spectrum. But if your Wi-Fi connection is currently bad, upgrading to the Linksys EA7500 is likely to make a difference.

All about the backend

Most users never bother to configure their router, in no small part because most routers are incomprehensible. Linksys is aware of this, and had done as much as possible to remove barriers.

First, there’s no IP address to memorize when you want to log in to the router. Instead, you can simply head to LinksysSmartWifi.com, or install the mobile app, to configure the device. Second, there’s a number of widgets that quickly summarize the router’s status, and let you configure things like guest access in just one click. Third, the page is designed in such a way that easily understood settings, like parental control, are prioritized.

But advanced options are still offered. You can set up your port forwarding and a custom DNS if you want to, and it’s not hard to find if you know what you’re doing. There’s still advanced setting to play with, however, such as device priority, which can dedicate more bandwidth to hardware – like a TV box – that most needs it.

Parents will appreciate the parental control, which let you cut off the Internet on a schedule. Want your kid to go offline at PM? No problem.You can also block individuals sites, if you want to.

Overall, it’s a great router backend. It might not match the Google OnHub for ease of use, but it’s a big improvement from most routers on the market.

Setup is simple, unless it isn’t

Under ideal conditions, setting up the EA7500 is straight-forward. Connect the WAN port to your Internet connection, plug in the power cable, then connect to the network wirelessly using the information on the included card. Open up your browser and you’ll be prompted to create a Linksys Smart Wi-Fi account, and guided through the rest of the router’s setup process.

My setup process wasn’t so easy. The router couldn’t connect to the Internet when I plugged it in, despite the fact that my laptop worked just fine using the same cable. This somehow prevented me from seeing the setup steps. I instead repeatedly saw a message stating that setup could not be completed, with instructions for a hard reset. Ultimately, I was only able to get the router working by first plugging it into my ISP’s router.

This was frustrating, because I knew exactly what I needed to do — set the EA7500 to assign itself a local IP address. There was seemingly no way to access that setting and enable Internet access before going through the setup process, and no obvious way to complete the setup process without Internet access. At one point I thought I’d found the answer, but was asked to enter a password I supposedly created during the very setup process I was trying to access.

Linksys worked hard to ensure setting up the EA7500 was as simple as possible, which is ironically why it became so complicated for me. Earlier access to the advanced settings could have saved me some headaches, and I hope later versions of the firmware address this.

The Linksys EA7500 isn’t the most powerful router on the market, or the easiest to use, or the most beautiful, but it ranks high in all three areas. The settings most novice users will want to tweak are easy to find, while the advanced settings aren’t obscured. And despite the hiccups this reviewer had, it’s easy to see how setup would be easy under most circumstances.

For $200 you could buy a similarly powerful Google OnHub router, which looks a lot nicer and is easier to configure, but you’d be limited to one Ethernet port and prevented from changing certain advanced settings. You could also splurge on something like the $400 Netgear Nighthawk X8, which offers twice as much potential bandwidth and sports an additional antenna. But that router costs $400, and the EA7500 already offers an excess of power at $200.

For many, the performance and features of any router aren’t going to add up to $200. But if you’re in the market for a high-end router, and don’t have an infinite budget, the Linksys EA7500 is a good pick.

NordVPN vs. TunnelBear: Which is the better VPN in 2022?

How many devices can you use NordVPN on?

What is a whole-home mesh Wi-Fi network, and do you need one?