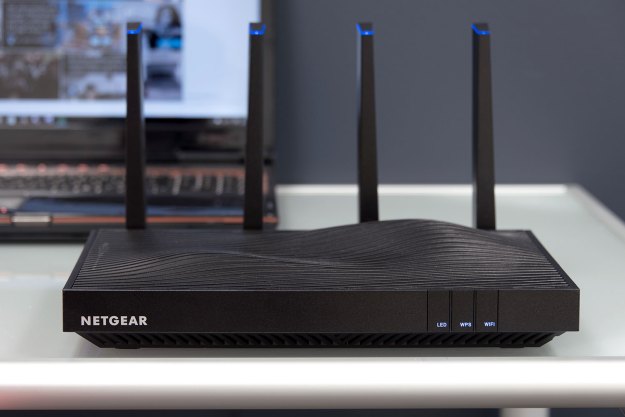 “The Nighthawk X8 is one of the best Wi-Fi routers you can buy.”

The router is an oft-overlooked part of a home computing setup. A slow network has the power to bring even the highest-end PC to a crawl, and troubleshooting a wireless network is a vague and frustrating process.

Sure, there are routers like Google’s OnHub that make the process easy, and provide excellent coverage, but in particular for gaming, there’s a thin line between optimum performance and crushing defeat. Netgear’s Nighthawk line has always gone above and beyond in network performance, and the new X8 is no exception.

The 802.11ac router is capable of 5.3Gbps of total Wi-Fi bandwidth across three channels, and it doesn’t stop there. The Nighthawk X8 is packed with almost every feature imaginable in a router. It has beamforming and MU-MIMO; it’s a DLNA and FTP server; it can run VPN utilities; and it offers security features like DoS protection and a built-in firewall.

All of that functionality doesn’t come cheap, and the Nighthawk X8’s $400 price tag is going to be an immediate turn-off for a lot of users. Can the X8 keep a steady course in the rough waters of stormy network demands, or is it a shipwreck waiting to happen?

There’s no hiding the Nighthawk X8. The massive box is three times the size of the standard home router, and has four thick plastic antennas that stick straight up off the back. It’s so large it would look right at home with the equipment used to communicate with the Mars rover. Despite its size, its simple black design is modern enough to fit in with any home theater, or advanced network gear.

The top of the device isn’t flat, but instead broken up by two large bumps. They’re hard to describe, but they serve an important purpose. Were the surface of the device flat, you might be inclined to stack a device on top of it, like a cable modem or a game console. But that would cause cooling problems. The bumps make sure nothing can be laid flat on the router.

That means finding a bit of space for the device is necessary. It’s not going to fit on the back of the shelf the printer sits on, nor will it slide easily between devices in a home theater cabinet. Netgear’s Nighthawk X8 is a serious piece of hardware, and it needs space to do its best work.

The X8 offers a total of seven Gigabit Ethernet ports. One is for Internet into the router, and four are traditional LAN ports. The final two are a pair of aggregated ports, mostly for increased bandwidth to high-end NAS solutions. There’s also a pair of USB ports, one 3.0, and one 2.0. That’s a plentiful selection for networked devices, network attached storage, and other network-level additions.

Wireless connectivity is the highlight, and the Nighthawk X8 brings the heat. It has 802.11ac Wi-Fi, with bandwidth as high as 5.3 gigabits per second (across multiple devices), broadcast from one 2.4GHz radio and a pair of 5GHz radios, and four active antennas. Netgear says the Wi-Fi amplifiers are now in the top of each antenna, rather than on the motherboard like usual. This allows both the sending and receiving signal to operate free from any interference from the rest of the router’s components.

My home is something of a gauntlet, even for powerful routers. Not only are there five people, each with multiple devices, living under one roof, but the three-story house was built in 1908, with lathe and plaster walls and concrete floors that pose a serious challenge to any signals. At peak usage times, there’s likely to be as many as four separate instances of Netflix, a gaming computer, a gaming console, and many phones attached to the network.

Yet the Nighthawk doesn’t break a sweat even as movies start streaming, and Blacks Ops 3 doesn’t hang or lag at all, even with hefty downloads running simultaneously. That’s the real test for a router aimed at computing enthusiasts and heavily loaded networks. Latency is a far bigger issue than actual download speeds.

Coverage was excellent, too. Netgear says the device is fit for large homes, which mine would likely be considered, and the signal was strong all the way at the opposite corner of the house, with a floor below and above the router.

There are two options for accessing the admin panel on the Nighthawk X8. The first is through a standard web browser access screen, which pops up on first connection, and can be accessed via the router’s IP address. Despite the vast selection of features, the web interface is as straightforward as on any Netgear router, and the documentation clear and detailed.

The Nighthawk X8 is packed with every feature imaginable in a router.

The router is intuitive because the terms and details listed by its software can change based on the complexity of the task at hand. If you’re trying to do something basic, the software assuming you might be unfamiliar with networking and offers a bit of guidance. Every checkbox is clearly labeled with exactly what turning it on does, and is often phrased as a question such as “are there other routers in your network?”

If you dive into more complex tasks, however, like Port Forwarding, the software assumes you know your way around an admin panel a bit better, and is more likely to ask about setting up a gateway. This helps open it up, and stops its guided instructions from slowing down experience users.

Uses can also access the router through the Netgear Genie app. Available for mobile and desktop operating systems, the Genie app allows for easy control and diagnostics, and it doesn’t even have to be on the same network to run. That’s a boon for anyone who needs to fix the network for roommates from the office, or adjust priorities without alt-tabbing out of a game in progress.

The Nighthawk X8 is covered by a one-year standard warranty. It includes protection from manufacturer defects and normal wear and tear for the first year, but not accidental damage. Thankfully, the oddly shaped top prevents you from trying to use it as a coaster.

At $400, the Nighthawk X8 isn’t for everyone. Most users will still benefit greatly from the slight bump to 5GHz in crowded areas, or MU-MIMO for networks with a lot of systems. But if gaming is a priority, users that find themselves fighting for connectivity with their roommates may want something like the Nighthawk X8. It’s also a pleasantly set-and-forget option, despite the high price tag and enthusiast level marketing.

In that sense, the Nighthawk X8 checks off basically every box imaginable for a wireless router, and we’d expect nothing less from a router at that price point. There are very few competing wireless solutions, but the Asus RT-AC5300 also runs about $400, and checks off most of the same boxes. Asus isn’t a dedicated router company, however, and its back-end and app support aren’t historically as strong.

Routers are tricky, because when everything is working right, the device just disappears. A router is only noticed when something goes wrong, and then there’s usually a lot of resetting involved. For the perfect network experience, there’s still no substitute for a wired connection. But if there’s just no way to make that work, a router like the Nighthawk X8 is the next best option.

The best wireless routers for 2022

The most common Wi-Fi problems and how to fix them