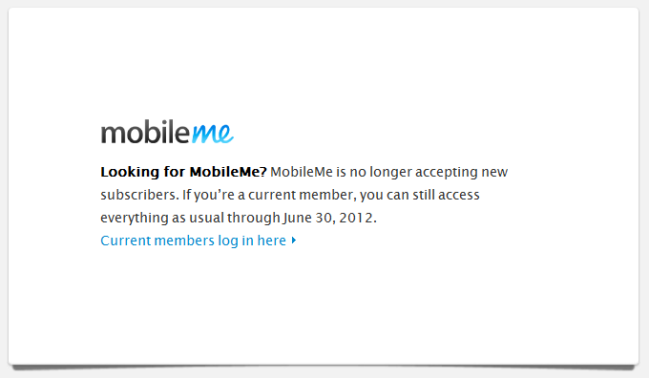 MobileMe is one of Apple’s few failures. A recent Fortune profile [via MacStories] of the company tells the story of how an irate Steve Jobs once lambasted the application’s team for its shortcomings. “Can anyone tell me what MobileMe is supposed to do?” he once asked. When given an explanation, he replied, “So why the f*** doesn’t it do that?” He didn’t stop there: “You’ve tarnished Apple’s reputation. You should hate each other for having let each other down.”

Apple isn’t used to these types of project stalls and stutters, and it comes as no shock that it plans to shut down MobileMe entirely. A couple of months after discontinuing its in-store sales, rebate programs for MobileMe were halted, causing many to think Apple might overhaul the service and make it free of charge. And it appears that Apple’s band-aid for the debacle is iCloud, announced yesterday at WWDC. From first glance, iCloud (which is free) appears to be enough of an upgrade from its predecessor to eliminate many of the headaches, but there are still some skeptics who believe this could be MobileMe 2.0. Yesterday Jobs admitted Apple’s faults with cloud computing, saying MobileMe “wasn’t our finest hour.” Only time will tell if it can successfully replace MobileMe – but what about the doomed services’ current subscribing members?

According to Apple Support, as of yesterday current members’ accounts were extended through June 30, 2012 without any additional charge. And come June 30, MobileMe will cease to exist. Content will be transferred to iCloud, where users can use their me.com or mac.com email addresses. Details on how exactly this will work are coming in the fall. Subscribers using the Family Pack option can create new accounts under this service, but effective yesterday you can longer upgrade to this or purchase more storage. And if you are one of the many out there with unused activation codes for MobileMe sitting around, you can ask for a refund – under the following conditions: “If you purchased a MobileMe box and your activation code has not been used to start or renew a MobileMe subscription, then you may be eligible for a refund.”

Users can also get pro-rated refunds. If you just started using the service within the last 45 days, you get all your money back; longer than that and you will get a partial refund.

While there aren’t many of them out there, will iCloud be able to assume everything devoted MobileMe users need it to? The new application’s iTunes syncing across multiple devices has stolen most of the hype, but Apple hasn’t fully discussed how iCloud will swallow up other MobileMe features, like iDisk, Photo Galleries (Photo Stream isn’t quite the same), and sharing content in general hasn’t been entirely explained yet. Of course an important ball in iCloud’s court is that it’s free, so we’re sure there are plenty of MobileMe subscribers out there ready to hear the ensuing details in the fall and kiss their annual fees goodbye.

Apple’s iCloud is experiencing issues across more than a third of its services
There’s no silver lining for iCloud users, and Apple needs to fix it
The latest version of MacOS now supports storing your messages in Apple’s cloud
Google doubles down on cloud storage with ‘One’ subscription service
IPVanish Free Trial: Try it for a month, no strings attached
The HP Pavilion laptop is only $500 with this limited-time deal
This 11-inch Chromebook from HP is only $98 at Walmart today
This HP Omen gaming PC with RTX 3070 is $500 cheaper today
This dangerous vulnerability tricks researchers by mimicking old threats
GPU prices and availability (October 2022): How much are GPUs today?
Best Microsoft Surface Laptop deals: Prices from $490
The best external hard drives for 2022
The best Chromebooks for 2022: great choices at every price point