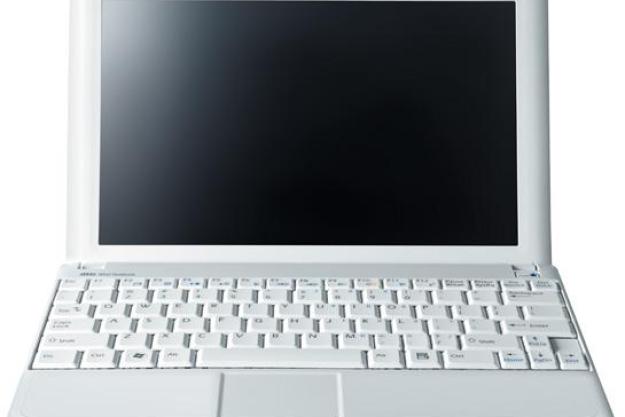 “For the moment, MSI's Wind definitively blows away the competition.”

It’s been almost a year since the original Asus Eee 701 appeared stateside, making traditional ultra-portables look fat with its size and weight, sending prices plunging with its $400 price tag, and triggering a landslide of imitators. In that time, many have tried, but few have succeeded in one upping Asus at its own game. The Wind is MSI’s freshman effort in the emerging subnotebook genre, but the company has managed to run with the best of them by offering a 10-inch display, a fast and efficient Intel Atom processor, and loads of storage.

One of the biggest complaints about the first generation of subnotebooks focused on their miniscule seven-inch screens, which made many tasks, like Web browsing, feel a bit like trying to take in the Grand Canyon through a submarine porthole. MSI has upped the size to a full 10- inches with the Wind, making an enormous difference in usability. Besides adding an extra three inches of physical screen space diagonally, resolution also jumps from 800 x 480 (on a seven-inch screen) to 1024 x 600.

Although you’ll never mistake the Wind for a full-size notebook, we found we could comfortably browse almost any Web page without side scrolling, and text was easily readable. You probably wouldn’t want to perform an extensive research project on it, or read A Tale of Two Cities, but for routine Craigslist browsing, e-mail reading, and IM, it’s up to the task.

As for display quality, our model seemed to have a pronounced bluish tinge with the default settings, but Intel’s display drivers made this easy to correct. The powerful LED backlight left little to be desired in terms of brightness, but we were slightly disappointed with the viewing angle, which had us constantly twisting and turning to make sure we were looking at it dead on.

While we were generally satisfied with the feel and function of the Wind, that’s only in relation to the lowered standards we have for subnotebooks, which seem to have an inescapable, toy-like cheapness to them. Our model had a keyboard trim piece that didn’t seem to mate very well with the shell, and weak hinges that allowed the display to bounce around with the slightest provocation. Neither were showstoppers, but we wouldn’t call the Wind sturdy.

The mere fact that the Wind comes preloaded with Windows XP is a testament to its computational horsepower, considering that first-gen netbooks like the Asus Eee 701 and CloudBook needed stripped-down versions of Linux run nicely. And indeed, the Wind takes its somewhat clunkier OS in stride: with multiple windows open, our Wind was responsive, and quick to pile on more.

In fact, the more we tried to deflate the Wind by piling on more and more software that was clearly not intended for subnotebooks, the more impressed we were. It not only ran Adobe Photoshop CS3 Extended, it booted it in five seconds flat – an impressive feat for any machine, much less one you can lift up with two fingers. And though it’s no gaming rig, we were in awe to see that it ran Half-Life flawlessly, producing a silky smooth frame rate even with higher settings. Of course, the integrated Intel GMA 945 Express graphics will prevent it from playing anything that needs DirectX, severely limiting modern options, but crank the time machine back to 2000 and any game is your oyster.

The Wind’s 80GB hard drive was also a pleasant surprise, leaving plenty of room onboard for both applications and data. While solid-state drives are slightly faster and more durable, for the moment we still feel the ample storage provided by conventional drives is more practical, and we were pleased to see MSI stick with what works.

While processors, RAM and even hard drives continue to shrink every year, making subnotebooks faster and more capable with every generation, there’s only so much that can be done to make a 10-inch keyboard and matchbook-sized touchpad more comfortable. MSI has done its best by stretching the keyboard to the absolute edges of the notebook, and doing the same for the keypad. That said, ham-fisted users and sloppy typists will still have trouble dealing with the shrunken proportions, which is just an inevitable trade-off to using a notebook this size. One factor that could have been improved: MSI’s screen hinges only allow the screen to rotate back roughly 45 degrees from laying out flat, which makes it difficult to see when using it in your lap at certain angles.

In a refreshing change of pace from many modern notebooks, MSI has kept third-party bloatware on the Wind to an absolute minimum, with barely anything installed that didn’t come with Windows. We would even wager that this helps account for its impressive speed as much as the upgraded specs do. The only drawback for novice buyers would be the extra step of installing some common necessities like Word without an optical drive, but we would call it a worth-while hassle in exchange for a pristine copy of Windows preinstalled.

The MSI Wind is available in Black, Pink and White

For a computer that will end up being tossed in backpacks, glove boxes and purses, then pulled out for spur-of-the-moment computing, battery life is a major issue – but subnotebooks don’t have much room for bulky battery packs. MSI attempted to make the most of the Wind’s battery with two major battery-life savers: an efficient LED backlit screen and Intel’s miserly Atom processor.

Both seem to have paid off. Our Wind came equipped with MSI’s extended six-cell battery, which promises five to six hours of battery life, and in testing, our Wind actually delivered. Granted, we had to lower the brightness settings to a squint-worthy level and lay off the CPU, but we imagine that most users could still get work or browsing done under these conditions.

It’s worth noting, however, that the currently available U100 ships with a three-cell battery that will cut that impressive run-time in half. While that makes it appropriate for home use, those who really intend to put its portable nature to use will probably find 2.5 hours of runtime annoying, and may want to invest in the larger battery, adding expense to the purchase.

For such a tiny machine, we were quite impressed with the number of ports packed onto the Wind’s petite little frame. MSI managed to fit microphone and stereo out jacks, VGA output, a card reader, an Ethernet jack, and three USB ports onto its skinny sides. We can’t even imagine a situation where we would connect three USB devices to this thing, but they’re there if you need them.

Astute readers may notice that the Wind is actually heavier than previous subnotebooks: It weighs 2.3 pounds compared to 2.0 pounds for the Asus Eee 701. While you could put that in a percentage and make it sound more severe (“The Wind is 15 percent heavier than the Eee.”) we found in testing that it was totally negligible. Consider throwing the weight of an extra cell phone into your laptop bag and you’ve imagined the weight difference. You can still hold it in one hand easily, still toss it into a backpack without worrying about waking up with a stiff back the next day, and still carry it from room to room like a book.

Move over, Asus: MSI has skipped the imitation game that most other manufacturers have played so far and actually bested the Eee with the Wind. Its $550 price tag may make it $150 more than the original Eee, but the refinement and features MSI has added make it well worth the premium, especially when Asus’ 10-inch Eee runs for $700. For the moment, MSI’s Wind definitively blows away the competition.

Topics
All of Samsung’s videos from today’s Galaxy Unpacked event
The Galaxy Book 3 Ultra is Samsung’s most powerful laptop ever
Samsung Galaxy Book 3 Ultra vs. MacBook Pro 16-inch
Best HP laptop deals: HP Envy, HP Spectre x360, and more
Nvidia may have another monster GPU in the works, and the price could be outrageous
AMD’s Ryzen 9 7950X3D pricing keeps the pressure on Intel
What is ChatGPT Plus? Everything we know about the premium tier
ChatGPT Plus to bring priority access during peak times — at a hefty price
Usually $3,879, this Lenovo laptop is down to $1,479 today
Get this Asus gaming laptop with an RTX 3060 while it’s $400 off
Best 2-in-1 laptop deals: Save on Dell, Lenovo, HP and more
The best USB-C cables for 2023
Apple just found a bizarre way to make virtual keyboards less annoying