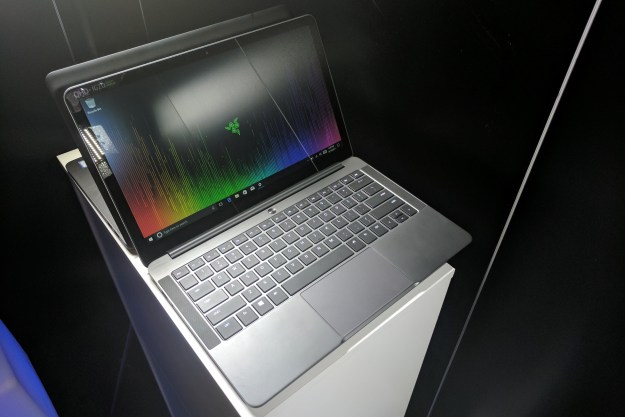 “Razer's Blade Stealth is a superhero with a secret identity.”

Razer’s Blade Stealth is no longer a new contender to the laptop world, and Razer is taking steps to ensure it stays relevant against newcomers. This time around, that means expanding the screen without — changing the chassis –raising the price, and offering a new color. Gunmetal.

This more subtle option should make it a better choice for anyone not looking to broadcast their gamer status, and it won’t cost any more than similarly equipped matte black Blade Stealth. We spent a few minutes with the system at E3 2017, and it’s shaping up to be a solid update.

More attractive than ever

Draped in attractive gunmetal, the already sexy Razer Blade Stealth cuts an even more appealing figure. It’s slim, light, and feels great in hand, something Razer has never had trouble with. The bezels, which stretched to almost a full inch on the previous model, are slimmer than before, something we’ve continually seen from higher-end laptops. It makes the system a lot sleeker, which is clearly at the front of Razer’s mind. The new Gunmetal option is absolutely gorgeous, and has a premium feel not found in less expensive systems.

Razer has also expanded the touchpad in the new generation of the Blade Stealth. It felt more precise, and stretched all the way to the bottom of the system’s chassis. Clicking the surface gave us a nice, chunky ‘thunk,’ and the touch surface felt smooth as we effortlessly flicked through multi-touch gestures.

The keyboard felt great, with long travel and a spacious layout that defies the laptop’s small size. The model we checked out had Chroma lighting, but Razer says the gunmetal rendition will just have white backlights — another testament to its commitment to taking Razer’s brand into the boardroom by cutting back on flashy elements.

Of course, building an attractive machine with solid set of input methods isn’t all there is to building a portable laptop. Razer learned that lesson with last year’s Razer Blade Stealth, which performed very well, but fell behind in battery life.

Still won’t game out of the box

While the Blade Stealth has received update, its core concept remains the same. Its thin, light chassis crowds out room for a discrete graphics chip. Gaming on this laptop is no better than on a Dell XPS 13 or HP Spectre x360.

Gaming is possible, however, if you enlist some help. Razer intends the laptop to be used with its Razer Core external graphics dock. A $400 add-on when purchased with a Blade Stealth ($500 otherwise), the Core dock adds a desktop-class GPU to the picture and connects over Thunderbolt 3.

That’s an expensive add-on, and frankly, we don’t think you should buy the Blade Stealth at all if serious gaming is your goal. It’d be wiser to tolerate the heft of Razer’s standard Blade, or simply opt for a gaming desktop alongside an inexpensive ultrabook.

But the option is there. The Core can even be upgraded with a new desktop graphics card at your leisure, so it does provide upgrade options when it comes time to boost the laptop’s performance.

The rich get richer

As part of the upgrade process, Razer has bumped the starting price from $1,100 to $1,400 — which doesn’t exactly feel like a selling point. However, the new base Stealth is much better equipped than the previous one, with an Intel Core i7-7500U, 256GB SSD, and 16GB of memory.

Razer will continue offering certain models of the 12-inch Blade Stealth with a 4K panel that sports, in our testing, an impressive 95 percent AdobeRGB coverage. That’s not exactly the simplest way to promote a product, but at least the internals are a bit faster.

Whether a new color and upgraded hardware is enough to draw people over to the Blade Stealth remains to be seen. It’s clear Razer has responded to user feedback, and worked to make the system a bit more subtle — a factor far more important in a portable laptop than a gaming system like the Blade.