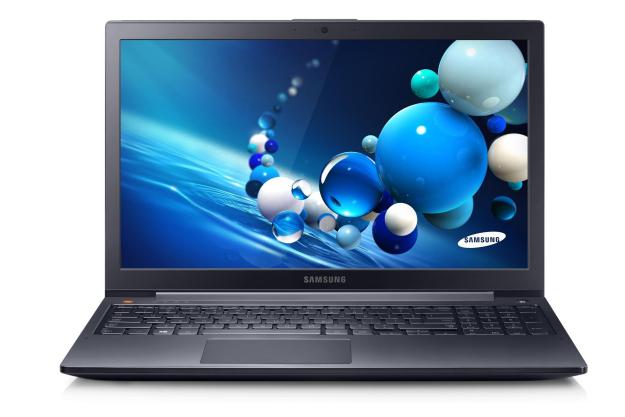 “The ATIV Book 8 is among the best laptops we’ve ever reviewed. The laptop’s outstanding performance, excellent endurance, and attractive design are matched by few competitors, all of which sell for hundreds more.”

Just five years ago Samsung was, to most Americans, primarily a manufacturer of high-end televisions. That market was booming, but, in a smart move, the company’s management decided to make the brand a globe name in other areas. Smartphones have been the greatest success story, but laptops have also been affected. And, as with smartphones, Samsung entered not by offering cut-rate bargain devices but instead a variety of products, including some that push the limits of what’s possible.

In every category, from the display to build quality to performance, the ATIV Book 8 is at or near the top of its class.

The company revealed its new Series 7 Chronos (now called the ATIV Book 8 after Samsung recently changed the naming of its lineups) earlier this year at CES. A thin-and-light 15-inch powerhouse, we found it intriguing, and even picked it as one of our favorite products at CES, but, with almost five months passing, the Series 7 Chronos we loved so much in Vegas sat on the back burner. However, that laptop is now coming to consumers, and its on-paper specs look just as impressive today as they did earlier this year.

Our review unit arrived with an Intel Core i7 quad-core, Radeon HD 8770M discrete GPU, and 8GB of RAM. This is impressive hardware for a machine that’s just under an inch thick and weighs about five pounds.

Pricing starts at $1,269, which is a good chunk of change but not unexpected for a system that offers serious power in a slim profile. But does slimness really translate to portability, or is this yet another 15.6-inch system best left at home?

In a recent article we said that Apple needs to consider updating the Pro’s look, and the ATIV Book 8 is the perfect demonstration as to why. After years of playing catch up, Windows laptops are now able to go toe-to-toe with Apple on aesthetics and build quality. That’s not to say the laptop is a clone, however, because the system uses the subtle brushed-aluminum finish that’s become Samsung’s trademark. And Samsung tells us consumer models will be “Ash Black,” rather than the silver seen in these photos.

Though the chassis isn’t unibody, build quality is excellent, with tight panel gaps, flex is not apparent in any surface. The display is attached with a broad hinge that keeps the touchscreen in place during use, and the system’s corners are not as sharp as those found on the MacBook Pro. The lack of an optical drive helps the rigidity and frees up space and weight for reinforcing the laptop’s body.

Dropping the optical drive also makes the laptop’s flanks available for connectivity – an advantage Samsung has used to provide four USB ports (two 3.0, two 2.0), HDMI-out, VGA-out, Ethernet, and an SD card reader. This is a good selection that compares favorably to the MacBook Pro and nearly ties with the Zenbook UX51Vz, which has one less USB port and drops VGA in favor of DisplayPort.

While the ATIV Book 8 has a premium look, the keyboard is a disappointment. Built from silver plastic, the keycaps feel flimsy and cheap next to the expanse of brushed aluminum surrounding them. Users who plan to write the next great American novel on their laptop may want to pass on this in favor of the Zenbook or MacBook Pro, both of which offer superior keys.

Backlighting is standard and offers several brightness settings. Light-leak is minimal, so the keyboard works well for people who frequently type in the dark.

Touchpad quality is good thanks to metallic construction and a wide area for users to wag their fingers. Multitouch gestures are smooth and easy to use on the low-friction surface. We can say the same of the display, too, as it’s coated with glass that lets fingertips glide with ease.

The 15.6-inch 1080p display on the ATIV Book 8 looks fantastic the moment it’s turned on. Solid results in our benchmarks backed up this impression. We found the panel can render 96 percent of the sRGB gamut, posting respectable contrast and black level results. This is not the best display in the class, but it’s certainly good, and it beats both the Toshiba Kirabook and the Asus Zenbook UX51Vz by a slim margin.

Our only real complaint is brightness, which topped out around 230 nits. Not bad, but not superb. Many competitors offer 300 nits or brighter. This issue was noticeable in a sunlit room, and outdoor use is difficult.

Audio quality is solid, and, combined with the display, makes this laptop a respectable entertainment center. Maximum volume isn’t astoundingly loud, but it’s good enough for a small room and there’s some reproduction of bass. Headphones or external speakers are recommended but not absolutely required.

Our review unit arrived with a Core i7-3635QM processor, a low-voltage version of Intel’s standard mobile quad-core. Though Samsung reduced its clock speed to sip power, the part still served up outstanding performance. SiSoft Sandra’s Processor Arithmetic benchmark reached a score of 101.2 GOPs, and 7-Zip managed a combined score of 18,126 MIPS. These figures are nearly equal to the most powerful laptops we’ve tested and well over twice what an average Ultrabook can manage.

PCMark 7, a general system benchmark that tests multiple components, came to a more mundane score of 4,104. Though still good, this score is short of the best. So-so storage performance is the main culprit, as the ATIV Book 8 does not come standard with a solid-state drive. At least the performance is compensated with storage, as a 1TB drive is standard.

Instead of relying on Intel HD graphics, Samsung packed in one of AMD’s new(ish) Radeon 8770M GPUs. This mid-range graphics part drove the system to a 3DMark Cloud Gate score of 5,637 and a Fire Strike score of 703. While these numbers are certainly better than Intel HD, they don’t make for a hardcore gaming system. Only titles with relatively simple 3D graphics will run smoothly beyond medium detail.

No 15.6-inch laptop will qualify as ultra-portable, but at 5.5 pounds, the ATIV Book 8 is no heavier than average. Mid-size laptop bags will be able to stow the system, and the weight is manageable when carried.

Battery life is the ATIV Book 8’s biggest surprise. In our tests, the laptop blew away the category average with a Battery Eater result of two hours and 47 minutes. This extended to seven hours in our Web browsing test and almost 11 hours in our light-load reading test.

Battery life is the ATIV Book 8’s biggest surprise. In our tests, the laptop blew away the category average…

These figures are almost double what we’d normally expect from a system in this category and even beat the majority of 11.6-inch to 13.3-inch Ultrabooks we’ve tested. The MacBook Pro can hang with the ATIV Book 8, but the Asus Zenbook UX51Vz offers roughly two-thirds the endurance.

The laptop’s excellent endurance is even more impressive in light of its power consumption, which ranges from 17 watts at idle (with 100 percent display brightness) to 67 watts at load. That latter figure actually is in league with some all-in-one desktops like the Lenovo Horizon and Acer Aspire U. Why is that? Neither of those all-in-ones had quad-core processors or discrete graphics, and the ATIV Book 8’s high-end hardware needs a lot more juice to run.

Warm at idle, not much warmer at load

Cooling the impressive hardware in this laptop is a challenge, and at idle the fan seems like it might not be up to the task. We recorded an external temperature of 94.2 degrees Fahrenheit, which is tolerable, but a bit high compared to similar systems. The fan was quiet, however, emitting no more than 40.9 decibels of noise.

Putting load on the system increased the external temperature to 104 degrees in a limited area above the keyboard. Though high for all 15.6-inch systems, this figure is not at all that unusual for a laptop that has discrete graphics. Nor is the noise reading of 47dB unusually loud, given the specifications.

Our review unit’s start screen came packed to the gills with add-on software, some of which made sense (like Pinball FX 2 and Plants vs. Zombies, two great games), and some of which didn’t (Jamie Oliver’s Recipes? Seriously?). The good news is that the Windows 8 start screen makes ignoring bloatware just a matter of right-clicking and then tapping “uninstall.”

The only serious bloatware offender is (surprise!) Norton. While some other companies have moved to installing Norton only as a Windows 8 app that does not interrupt the user with ads, Samsung is still using the old-fashioned trial install. This isn’t hard to get rid of, but it’s annoying until you do.

The Samsung ATIV Book 8 is the company’s premium effort in the popular 15.6-inch category, and it’s a fine laptop. In every category, from the display to build quality to performance, this laptop is at or near the top of its class. We were even surprised to find that the battery not only exceeds what is typical for a large laptop but also actually beats the results we’ve recorded from many 13.3-inch Ultrabooks. We’ve never tested a laptop with a screen this large that could achieve such results without relying on an external add-on battery.

Complaints? Well, the keyboard is a bit of disappointment given the system’s price, and external temperatures are above average at idle. But that’s it.

Let’s talk price. The MSRP of our review unit is $1,269, which is nothing to laugh at. However, the MSRP of a Retina MacBook Pro 15 is $2,199, and the Asus Zenbook UX51Vz, whose price came down recently, still starts around $1,799. The Zenbook is a favorite of Digital Trends, and we still think it looks and feels a bit more expensive, but the ATIV Book 8 offers better endurance and competitive overall performance for hundreds less, which makes for a real bargain.

If you’re in the market for a premium 15.6-inch laptop, be it a thin-and-light or a desktop replacement, you must give the ATIV Book 8 a long, hard look. We can say without a doubt that it’s among the best laptops we’ve ever tested.