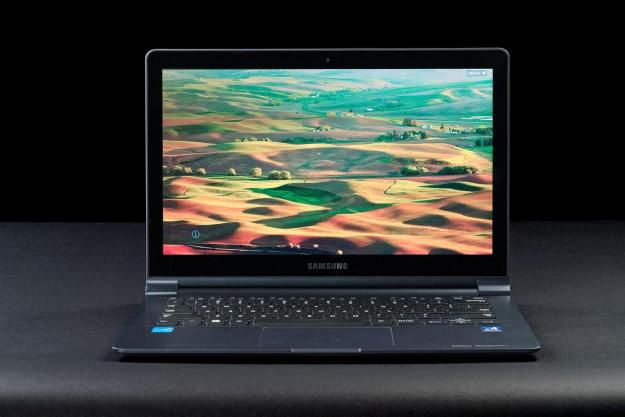 “Well-built and boasting an excellent keyboard, the ATIV Book 9 Lite could be a real contender among affordable laptops. Unfortunately, it’s let down by the processor, which offers netbook-grade performance and merely average battery life.”

Netbooks may be dead, but the idea of low-voltage computing hasn’t been buried with them. On the contrary, it’s now mainstream, and some laptops that don’t earn the Ultrabook label now ship with low-voltage processors rather than more powerful (and power-hungry), options. The “why?” can be answered by battery life; consumers who do rarely do more than browser the Web have become more enamored with runtime than gigahertz.

Most manufacturers are content to ship whatever low-voltage part Intel dreams up, leaving consumers with the option to buy any processor they’d like as long as it’s a Core. Only Samsung has shown much interest in exploring alternatives. The company did it first with its Series 5 Chromebook, which can be purchased with Samsung’s own Exynos ARM processor, and now it’s doing it again with the ATIV Book 9 Lite.

The ATIV Book 9’s has one of the best keyboards available on a laptop sold under $1,000.

In most respects the ATIV Book 9 Lite is similar to its more expensive cousin, the ATIV Book 9 Plus. Yet the Lite starts at just $799, a full $300 less than the Plus. Why? The hardware. While the Plus has an Intel Core processor, its more affordable cousin uses an quad-core AMD chip. Designed for very thin systems, including tablets, this quad-core processor competes with the Intel Atom, as well as ARM chips, rather than the more powerful Core line.

This is why Samsung can offer a system that’s barely more than a half-inch thick for $799, but sacrificing performance to improve portability is a historically troublesome compromise. Haswell has set the bar for battery life high without damaging the user experience. Can AMD’s new hardware hope to compete?

While inexpensive for a system of this size, the ATIV Book 9 Lite doesn’t reach its low price by cutting corners. This laptop offers everything consumers want, including a slim profile, thin display bezels, sturdy chassis and good material quality. Plastic is the order of the day, but this is no Fisher-Price reject; in fact, the Lite feels more robust then the all-metal ATIV Book 7 we recently reviewed.

Aesthetics are another matter. Though far from ugly, the Lite’s glossy exterior is a fingerprint magnet and, when purchased in blue, the system looks a bit drab. Buyers who like the look of the Samsung Galaxy phones will like what the Lite has going, but those who find the company’s obsession with fake brushed aluminum tiresome won’t have their opinion changed by this laptop.

Connectivity includes two USB (one 2.0, one 3.0) ports, HDMI, and a combo headphone/microphone jack. Both VGA and Ethernet are enabled via adapters. On the whole, these options don’t compare favorably to competitors, most of which offer three USB ports and don’t need adapters to use Ethernet or their second video output.

“Thin and affordable” usually translates to a so-so keyboard, but this laptop is an exception to the trend. Besides a great layout with plenty of large, easy-to-hit keys, the ATIV Book 9 Lite boasts great key travel and good tactile feel. Only Lenovo regularly offers a superior keyboard.

Unfortunately, the excellent keys come at the expense of backlighting. Removing this feature increases space beneath the keys, which no doubt contributes to key travel, but also puts the Lite at a disadvantage in dark settings. Many competitors offer backlighting as a standard feature on laptops sold around the same price.

The touchpad is a bit of a weak point, as it lacks texture and is only marginally defined from the surrounding palmrest by a thin, shallow lip. The integrated left and right keys also disappoint with minimal travel, and they sound a bit cheap when used. Multi-touch gestures work well, however, and though the touchpad responds to the lightest touch, we had no issue with accidental activation.

Not much to look at

Unlike more expensive laptops, this laptop must get by with an old-fashioned 1366 x 768, twisted-nematic (TN) LCD touchscreen. Viewing angles suffer as a result, particularly on the vertical axis. Simply tilting the display a few degrees can drastically change image quality.

The display scored poorly in our tests, rendering just 59 percent of the sRGB gamut and offering a contrast ratio of just 80:1. Black levels are most responsible for the poor contrast, but brightness barely managed to climb over 200 lux, which is average at best. The lack of brilliance is made worse by a mirror-like finish that shows reflections even in a modestly lit room.

At least audio quality is adequate, as the Lite’s speakers provide enough volume to fill a small room and have a clear, crisp mid-range that rarely falls into distortion. Headphones will of course be an improvement, but the built-in audio will do if they’re not available.

The processor inside the ATIV Book 9 Lite is a quad-core AMD part clocked at “up to” 1.4 GHz. The architecture used is Kabini, a new part that seeks to compete with Intel’s aging (but soon to be refreshed) Atom lineup.

To see what the new processor can offer we fired up our standard benchmarks, and were not-so-promptly disappointed. SiSoft Sandra’s Processor Arithmetic test came to a score of just 8.43 GOPs, while 7-Zip returned a combined result of 1,723 MIPS. These scores are almost four times worse than an average Haswell Core i5 low-voltage processor and just barely match the Atom dual-core we tested in the recently reviewed HP Envy x2.

Samsung’s ATIV Book 9 Lite is an interesting, but failed, experiment.

The Lite does ship with a standard 128GB solid state drive, so storage performance is solid, but that wasn’t enough to save the system’s PCMark 7 score. We recorded a final result of 1,582, a number that (once again) barely beats the HP Envy x2 and is far behind any Intel Core powered laptop.

Even 3D performance, a traditional strength of AMD, came up short. The 3DMark Cloud Gate reached a result of just 1,186 and the Fire Strike test crawled in with a score of 212. Both numbers are way behind fourth-gen Intel Core processors, though they do again beat Atom. Gamers should stay far, far away from this laptop.

Subjectively, the Lite doesn’t always feel as slow as its numbers suggest, but its lackluster performance can result in unusually long load times for even the most basic tasks. Windows Search, for example, is almost instant on other SSD-equipped laptops; on the Lite, search often needs several seconds to present results and will sometimes present results in waves as more are located and loaded.

While this may seem a minor annoyance, a few seconds here and there can add up, and Windows 8 doesn’t cope well with limited power. Animations sometimes lag or stutter, which leads to an experience that feels half-baked and buggy, as if the Lite somehow shipped with an early pre-release build. Internet Explorer also ran poorly, and YouTube videos sometimes dropped frames, especially with multiple tabs open.

Buyers might expect the ATIV Book 9 Lite’s poor performance to be redeemed by great battery life, but this expectation is not met. We were surprised to see the battery give out after barely more than six and a half hours in our light-load Reader’s Test, a figure that’s easily dwarfed by Haswell-powered laptops with battery life approaching, and exceeding, ten hours.

Load endurance is better, as the Lite ran the Peacekeeper Web-browsing test for almost 5 hours and 45 minutes before going flat. But this number is only competitive with Haswell laptops that offer far better performance and are sold at a similar price, such as Acer’s Aspire M5. Consumers who care about long life will be better served by an Ultrabook.

The battery itself deserves some of the blame, as it’s rated for only 30Wh, about 15Wh below average. Yet this is not the sole problem. Our wattmeter showed the Lite consuming about 9 watts at idle with the display at maximum brightness. Strangely, power consumption barely budged at full processor load, reaching a maximum of 13 watts.

These results, though unusual, make sense in light of the system’s battery life. At idle, the Lite actually draws more power than some Haswell ultrabooks, and so it doesn’t last as long on a charge. At load, however, consumption is about half that of a typical Ultrabook, which allows for competitive endurance despite the small battery.

While the AMD hardware inside the Lite mostly lets the laptop down, it does offer extremely cool and quiet operation. At idle we measured an external temperature no greater than 70.3 degrees Fahrenheit, identical to room temperature at the time, and even our most demanding stress test increased the temperature to barely more than 90 degrees.

Better still, these results came in spite of a nearly silent system fan. Though present, and audible in a very quiet room, the fan usually blends into ambient noise even at processor load. Only our most demanding 3D graphics test made the fan loud enough to register on our decibel meter at a quiet 40.3dB.

Samsung’s ATIV Book 9 Lite is an interesting, but failed, experiment. There are many things that we like about it; the keyboard is easy to love, the chassis is slim, and build quality is good for the price. If the Lite sold with a fourth-gen Intel Haswell processor, even a slow one, it’d be a serious contender in the budget Ultrabook market.

Instead, the Lite is saddled with an AMD quad-core that provides netbook-grade performance, yet also can’t match the idle battery life provided by most Haswell competitors. This ruins the value of the Lite, not because the system is unusable (though it can, at times, feel very slow) but instead because there are so many faster, better alternatives. The Lenovo Yoga 13, Acer Aspire M5, and Asus Zenbook can be had for the same price, or less, and they make the Lite look far too expensive.

If Samsung drastically cuts the price, or upgrades the battery, this laptop might find a niche for itself as an affordable, yet extremely slim, Ultrabook alternative. We recommend that buyers stick with Intel-powered competitors until then.

Best gaming monitor deals for October 2022
Apple has a bunch of new products coming, but not this year
Best MacBook deals and sales for September 2022
The best MacBook in 2022
AMD Ryzen 7000: Everything we know about Zen 4 CPUs
Apple’s October event may have been canceled before it began
Developer says it can turn your AMD 6800 XT into an Nvidia 3090 Ti
Best gaming chair deals for October 2022
This new Windows 11 feature will help you protect your passwords
HP flash sale: Pavilion x360 2-in-1 laptop just got a $130 price cut
Save $550 on this HP gaming PC with an RTX 3070 today
Hurry — Dell XPS 13 is $550 off in Dell’s monster clearance sale
Flash deal drops this 15-inch Dell laptop to just $250