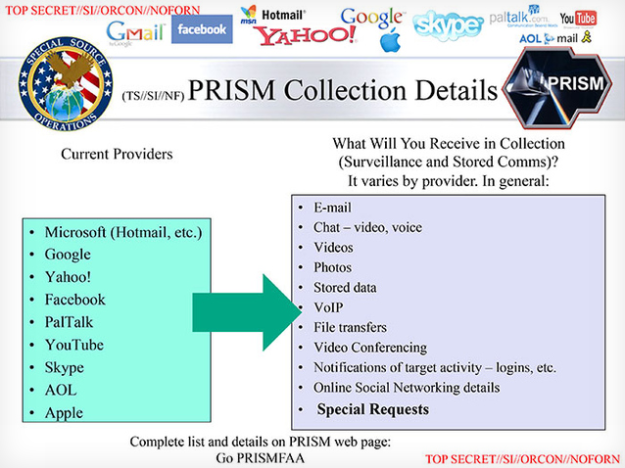 Unnamed sources have supplied several leading publications with information purporting to show that the National Security Agency (NSA) and FBI have for the last six years been mining information from the servers of some of the world’s biggest Internet companies.

The Guardian and Washington Post on Thursday reported that Microsoft, Yahoo, Google, Facebook, AOL, Skype, YouTube, and Apple are all part of PRISM, a top secret domestic surveillance program that allows the government agencies to collect information “including search history, the content of emails, file transfers and live chats.”

The document, a 41-slide PowerPoint presentation classified as top secret and prohibited from being shared with overseas allies, reportedly refers to the collection of data “directly from the servers.”

However, since the Guardian and Post reported the story, several of the Internet giants have been quick to deny any knowledge of PRISM, which was launched in 2007 during George W. Bush’s presidency and continued under President Obama. Of those who have so far issued statements, all are flatly denying that they provide agencies with direct access to servers, though the PRISM documents clearly suggest otherwise.

In a bid to reassure users of its plethora of online services, Google on Thursday evening issued the following statement: “Google cares deeply about the security of our users’ data. We disclose user data to government in accordance with the law, and we review all such requests carefully. From time to time, people allege that we have created a government ‘back door’ into our systems, but Google does not have a back door for the government to access private user data.”

Facebook, too, has gone on the record to say it doesn’t directly share its data with government agencies. The social networking giant’s chief security officer, Joe Sullivan, said in a statement: “We do not provide any government organization with direct access to Facebook servers. When Facebook is asked for data or information about specific individuals, we carefully scrutinize any such request for compliance with all applicable laws, and provide information only to the extent required by law.”

The news comes just a day after another Guardian report revealed an NSA order requiring Verizon to supply the government agency with data related to all calls made in the US over its network.

Topics
Video-editing app LumaFusion to get a Galaxy Tab S8 launch
What is Mastodon? Here’s why everyone’s talking about this Twitter alternative
How to use Mastodon: create your account, join servers, and more
The most common Zoom problems and how to fix them
This Chrome extension lets hackers remotely seize your PC
This trick improves the power efficiency of Nvidia’s RTX 4090
Nvidia may be killing some of its most popular GPUs
Nvidia RTX 4080 costs too much, recent survey shows
Best Cyber Monday Laptop Deals: MacBook, Lenovo, Dell, HP
Best Cyber Monday Deals 2022: Laptops, TVs, AirPods, and more
The best Cyber Monday Chromebook deals for 2022
Cyber Monday Gaming PC Deals: these discounts may not last
Alienware Cyber Monday deals: Gaming laptops, PCs, monitors