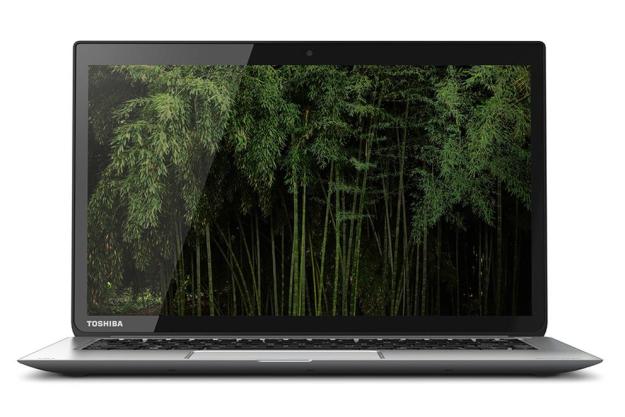 “While the Kirabook’s hardware impresses, Windows software rarely makes proper use of its high-resolution display.”

Apple’s announcement of the MacBook Pro with Retina raised the bar on laptop display quality, and competitors have been slow to catch up. Windows laptop manufacturers seem content to slap 1080p on anything that sits still, leaving just Google to take up the challenge with its Chromebook Pixel. Now, Toshiba is joining the fray.

Frankly, we expected the first Retina-esque PC laptop to come from Acer or Dell, as rumors and press previews had given us reason to think these companies were already working on a response. So we were surprised when Toshiba sent us an invite to check out its Kirabook, the first Windows 8 laptop with a 2560 x 1440 display.

What is a Kirabook? Toshiba told us “Kira” means “fine cloth” in Japanese, which makes plain the laptop’s premium intentions. And while the display is the headline feature, other specifications haven’t been neglected. Our review unit arrived with a Core i7-3537U dual-core, 8GB of RAM and a 256GB solid-state drive.

Unfortunately, the price shocks more than the specs impress. An entry-level model will set you back about $1,600 and our top-end our review unit is sold for a whopping $2,000. That’s well past the price of a 13-inch MacBook Pro w/Retina and even beyond the Asus Zenbook UX51Vz. Can Toshiba justify almost two grand for an Ultrabook?

If you set the Kirabook in front of a friend and told her you’d spent $1,600, nevermind $2,000, she’d probably think you were joking. There’s nothing about the laptop’s exterior that even begins to inspire. The Toshiba Satellite U845t, which costs $800, is larger but otherwise identical.

… this is a solid Ultrabook that seems built to last. We just wish it looked the part, too.

The lack of extravagance is a shame because this is a brilliantly engineered PC. Though equipped with a display that rivals a MacBook Pro with Retina, the Kirabook is actually as thin and light as the 13-inch MacBook Air 13. Don’t think this diet results in weakness, however, as the chassis is as stiff as a stone tablet and built with just a handful of seams. No panel contorts under pressure and even the display offers surprising, though not complete, resistance to flex.

In short, this is a solid Ultrabook that seems built to last. We just wish it looked the part, too.

Port selection consists of three USB (one 3.0, two 2.0), HDMI, card reader and a headphone jack. Ethernet is not present. This represent a good selection of connectivity for an Ultrabook, and most ports are easy to access. We did find the headphone jack’s location near the rear of the laptop a bit hard to access, though.

Better to touch than type

The high-resolution display on the Kirabook is also a touchscreen, providing another bullet point to use in comparisons with the MacBook Pro. Glass has wisely been used to cover the display panel, providing in a slick, premium feel. Another nice touch is the Ultrabook’s wide display hinge, which helps keep the panel still while the user’s fingers prod it.

Poor keyboard quality is one of Toshiba’s most persistent sins, and the Kirabook suffers from it. Though the keyboard layout is reasonably roomy, the alphanumeric keys could be larger and some others, like Shift and Caps Lock, are much too narrow. We still don’t know why this layout is used when competitors like Lenovo have shown that far more can be offered within a similar space.

Not all the news is bad, however. Key travel is acceptable and the palmrests large, two traits that help redeem the keyboard’s flaws. Backlighting is standard, too, though only one brightness setting is offered.

Touchpad quality is mixed. There’s plenty of space and the touchpad’s boundaries are well defined, but multi-touch gestures lack grace and the physical left and right buttons have almost no tactile feel.

We expected the Kirabook to do well in our display tests but, even so, it surprised us by rendering 94 percent of the sRGB gamut and dishing out surprisingly deep black levels. These results make it the second-best Ultrabook display we’ve reviewed (Dell’s XPS 13 with 1080p beats it by a hair). Only brightness disappoints; the Kirabook is dimmer than the XPS 13, Asus Zenbook UX31 and most other high-end Ultrabooks.

Despite all its technical brilliance, the Ultrabook suffers from a serious problem: scaling. Most software is not designed for a high-resolution display, which can make it difficult to use. Windows tries to solve this by scaling up the size of windows, icons and other interface elements, but the process reduces sharpness and isn’t reliable. Some applications don’t scale at all, or scale poorly, which results in undersized icons and text that’s difficult to read.

Even elements of Windows 8 suffer from this problem. The system tray on the desktop taskbar, for example, is absurdly small and difficult to use even with the touchpad. Attempting to manipulate the tray with the touchscreen is a matter of trial and error.

This problem must be frustrating for Toshiba, because it’s not the company’s fault. Microsoft should have made sure its own operating system and bundled apps could handle 1080p and beyond. Until Windows’ scaling is improved, there’s little PC manufacturers can do to make the experience better.

But the blame game doesn’t change the end result: The Kirabook’s display has more pixels than is practical for a current Windows Ultrabook, and the user experience suffers as a result.

We’re happy to report that Toshiba has managed to pack beefy speakers into this Ultrabook’s small chassis. At maximum volume the sound is robust, clear and provides some grunt to bass tones. A cheap 2.1 sound system will be much better, but the Kirabook can at least makes movies and music tolerable when external speakers aren’t available.

Packing this Ultrabook certainly isn’t a chore. With less than three pounds of heft, a thin profile and minimal width, there’s not much bulk to bother you.

Minimal size does leave little room for the battery, but that doesn’t mean endurance is hopeless. The Peacekeeper Web browsing benchmark drained the battery in 4 hours and 39 minutes, and that figure was increased to about 7 hours in our light-load Reader’s Test. These numbers are average compared to other Ultrabooks.

Power tests revealed this laptop to be a bit more power-hungry than average, as it consumes 12 watts at idle with maximum brightness and up to 36 watts at full load. We can’t ding the laptop for these figures; that’s the cost of above-average processor performance.

Our upgraded review unit came with Intel’s Core i7-3537U dual-core processor, one of the quickest low-voltage parts in the company’s stable. This chip powered the Kirabook to impressive SiSoft Sandra Processor Arithmetic and 7-Zip scores of 45.77 GOPS and 8,907 MIPS, respectively. These scores are the second-best we’ve ever recorded from an Ultrabook, though still well behind Asus Zenbook UX51Vz and its low-voltage quad-core processor.

Anyone who plans to type and run demanding software had better get used to sweaty palms.

PCMark 7 also had good things to say and returned a score of 5,247. Any score above 5,000 is excellent for an Ultrabook and represents both a strong processor and lightning-fast hard drive.

There’s no discrete graphics option, so users must rely on Intel HD 4000. 3DMark predictably chewed up the integrated graphics processor by turning in a Cloud Gate score 3,994 and a Fire Strike score of 579. These results indicate a laptop that will struggle to run demanding games at 1366 x 768, nevermind the laptop’s native resolution. Even casual gamers should steer clear.

At idle, or near it, the Kirabook remains pleasant with external temperatures that rarely exceed 94 degrees Fahrenheit and a barely audible fan. Stressing the process almost immediately forced the cooling system into high gear, however, which turned the volume up to almost 50 decibels. That’s among the worst results we’ve recorded, and all the huffing and puffing doesn’t do much. The Ultrabook’s exterior still reached a relatively high maximum temperature of 108 degrees.

Our graphics stress test pushed cooling system to its limits. The fan began to scream at 54.5 decibels (by far the highest reading we’ve recorded) and temperatures increased further to 116 degrees. Worse, that maximum temperature was not recorded on the bottom, the warmest spot on most Ultrabooks, but instead along the keyboard. Anyone who plans to type and run demanding software had better get used to sweaty palms.

The Toshiba Kirabook is in many ways a great Ultrabook. The 2560 x 1440 would be impressive on its own, yet it’s served up in a package no larger than a MacBook Air that still offers excellent performance and reasonable battery life. Toshiba’s engineers have certainly earned their keep.

But even the best hardware can’t reach its potential without the right software, and that’s where this Ultrabook – through no fault of its own – stumbles. The poor scaling of Windows 8 is just the tip of the iceberg, as very few developers working on PC software do so with high-resolution Ultrabooks in mind. There’s nothing on the market that takes advantage of the extra pixels. And anyone who makes regular use of legacy software will actually find the display a hindrance.

The scaling issue, along with sticker shock and poor cooling, makes the Kirabook difficult to recommend. Users who just want a beautiful display would be better off with the Dell XPS 13, while those who want an ultra-portable workstation will prefer the far more powerful Asus Zenbook UX51Vz.