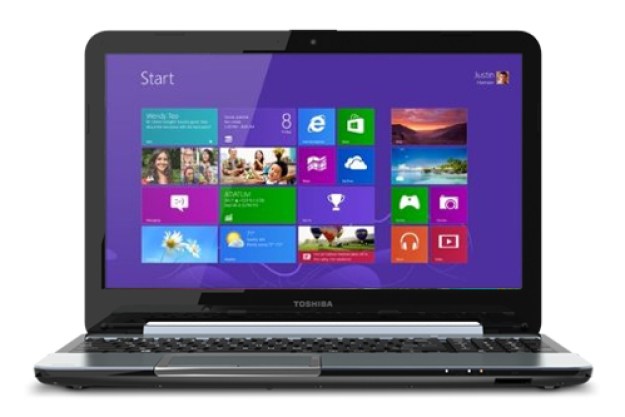 “This laptop is a good value if it can be found for $600 but should be crossed off your list as long as it’s priced higher than that.”

Ah, I bet you thought we’d start our Windows 8 laptop reviews with an exotic, expensive piece of hardware — right? We had you fooled. Though those devices are taking the lion’s share of the attention — and with good reason — most consumers will continue to buy less expensive products. It remains to be seen if touchscreens will even become a sizable part of the market.

So we come to the Toshiba S955. This is one of the company’s new Windows 8 laptops, but it’s not convertible, and it’s not a touchscreen. It’s a regular 15.6-inch mainstream laptop that ships with an Intel Core i5-3317U processor. It’s also not an Ultrabook because it doesn’t include any solid-state drives. Buyers instead receive a 750GB mechanical drive and 8GB of RAM.

And the price? $749. That’s a competitive number for a new Windows 8 laptop with as much storage and RAM, but it also puts this new Windows 8 laptop head-to-head with Ultrabook favorites like the Acer Aspire M5. Can Toshiba make a mark in this heavily contested segment?

The new Satellite S955 lacks the unique textured finish found on some Toshiba laptops we’ve previously reviewed. Even so, it’s not a bad looker. The lid is made from trimmed gunmetal aluminum, and the same treatment is spread across much of the interior. It’s complimented with glossy black plastic that attracts eyes — and also fingerprints. These touches are enough to make the S955 look a bit more luxurious than its price suggests.

Build quality is generally good. Panel gaps are extremely small, and most surfaces feel reasonably firm. There is some flex in the chassis, however, which can be blamed on the optical drive, a feature that is rare among thin laptops. Picking up the laptop by its left side can be an alarming experience, as plastics audibly creak and strain.

Connectivity also suffers because of the slim frame. The inclusion of two USB 3.0 ports and one USB 2.0 port is standard for an Ultrabook but underwhelming among mainstream 15.6-inch laptops. Video output comes from a VGA and HDMI port, while separate microphone and headphone ports handle audio.

Our review unit, like all S955 models, arrived with a 1366×768 15.6-inch display. Our subjective impressions were somewhat favorable. We thought the glossy panel managed to bring colors to life when viewed in a dark room.

Using the laptop in a day-lit room is a different story due to the display’s dim backlight. We also found that the display could only manage 63 percent of the sRGB color gamut — a very poor result. To be fair, however, these results are competitive with laptops of similar price. And the laptop redeemed itself slightly by offering better-than-average black levels. This is probably why we perceived good contrast when viewing the laptop in a dark room.

We approved of the display’s low dot pitch. There is no “screen door effect,” an issue that continues to plague some 14-inch and 15.6-inch laptops with this resolution.

Audio quality struck us as middling. We listened to several tracks and found them acceptable, but we also noted a tinny quality to the sound that is typical of inexpensive laptop speakers. Most consumers should buy a pair of external speakers or headphones to truly enjoy media.

Keyboards have been a weakness of Toshiba laptops in the past, and that hasn’t changed. There’s plenty of space for users to work with, and a full-sized numpad is included — but that’s where praise ends.

There’s not much key travel available yet, and, in spite of that, each press has an indistinct squish to it. We noticed a significant amount of keyboard flex, too. Both problems contribute to a vague and imprecise typing experience. Since our hands compensated for the lack of tactile feedback by pressing harder, finger pain was a common problem when using the S955.

No backlight is included, which, though disappointing, is not unusual for a laptop in the mid-range market.

Touchpad quality was also sub-par. Its wide space was texture-less and supported by left/right mouse buttons that have minimal travel. Multi-touch scrolling was awkward, and the touchpad sometimes mistook our attempts to scroll for zooming. Most consumers considering this laptop will need to buy a portable mouse.

The S955 is thin, but also includes a low-power Core i5 processor. During our testing, we found the system idled at a maximum exterior temperature of 83.6 degrees Fahrenheit, which is barely noticeable. However, load increased this reading to 100.7 degrees Fahrenheit. While hot for a 15.6-inch laptop, this is just tolerable for desktop use. Lap use at full load proved uncomfortable.

We noticed the laptop’s fan throughout most of our testing. It is audible while idle in a quiet room and instantly noticeable at load. The fan emits a high-pitch whirl that’s sure to distract some users. Consumers easily annoyed by a computer’s fan should steer clear of the S955.

Power sipping, but light on battery

The laptop’s power-sipping Core i5 promised great endurance, but was fought by a small 4-cell battery. Our results were simply average in the end. We recorded 1 hour and 28 minutes in the Battery Eater load test, and almost 5 hours in the light-load Reader’s Test, which we think is adequate for the S955’s purpose.

A new era of bloatware

This is the first Windows 8 laptop we’ve fully reviewed, so it’s the first chance we’ve had to see what bloatware looks like in the new OS. The verdict? It’s more attractive — and more annoying — than ever before.

Numerous apps are pre-installed on the S955 including Toshiba App Place, a Games section, Vimeo, Netflix, eBay, and more. Bloatware that used to take the form of browser shortcuts are now full-fledged apps. An entire section of the very pretty Windows 8 Start screen is devoted to these apps.

And then there’s Norton Internet Security. It hit us with pop-ups, as always, but included a new twist. We were prompted several times by a registration screen that could only be banished by shutting the app down in the task manager. This was so annoying that we uninstalled the entire anti-virus suite in order to complete our testing.

Most of the bases mostly covered

There are no surprises inside the S955. Its Core i5-3317U is a processor we’ve tested time and time again. Graphics are provided by Intel HD 4000, and the 8GB of RAM, though useful, is probably overkill. There’s also no solid-state drive.

Even so, the laptop reached the expected marks in our processor tests. It scored about 35 GOPS in SiSoft Sandra and managed a combined score of 7,378 in 7-Zip. These are exactly in line with other laptops with the same processor. Windows 8 had no impact — positive or negative — on the benchmarks.

PCMark 7 produced a score of 2,785. It’s hard for any laptop lacking a solid state drive or discrete GPU to break 3,000, and the S955 did not prove an exception. This is a respectable score for an entry-level laptop and is much better than competitors we’ve recently tested, such as the Lenovo ThinkPad Edge E530 and HP Envy 4.

3DMark 06 and 3DMark 11 reached respective scores of 5,462 and 716. These are fine results for a dual-core laptop with Intel HD 4000 (a bit better than average, in fact), but they don’t indicate a gaming powerhouse. Modern 3D games will only be playable at low-to-medium detail.

The Toshiba S955, like most inexpensive Windows laptops, has its fair share of weaknesses. The display is adequate at best, the keyboard is lacking, and the build quality is mixed. All of these downsides are common of laptops in the segment, but some do manage a better user interface. That problem makes the S955 unsuitable for buyers who use their laptop for more than a couple of hours per day.

However, there are strengths. The S955 offers fast hardware in a slim form factor and scores well in every benchmark. It also includes gobs of RAM and hard drive space. Users who are looking for a thin but fast system will not be disappointed.

We might be able to give this laptop our recommendation if it was less expensive, but it’s not. At $749, the S955, which is not an Ultrabook, is priced against every low-end Ultrabook on the market, and it has no business competing against them. Its user interface, build quality, portability, and overall performance is not on par with similarly-priced options like the Acer Aspire M5, HP Envy 4t and Lenovo U310/410.

It’s possible that the high introductory MSRP is meant to snare buyers who are excited about Windows 8 (if they exist), and will drop quickly. This laptop is a good value if it can be found for $600, but it should be crossed off your list as long as it’s priced higher than that.

This killer Black Friday deal on an RTX 3060 gaming laptop is still available
Best Dell XPS deals: Save on XPS 13, XPS 15 and XPS 17
Best MacBook deals: Save on MacBook Air and MacBook Pro
Best laptop deals: Save on Apple, Dell, HP and Lenovo
I replaced my MacBook with a Quest Pro for a full work week. Here’s what happened
How to post a Short on YouTube
How to block people on Snapchat
The best OLED monitors you can buy
Mass shipment of Apple’s mixed-reality headset may be delayed
4 tech collabs we want to see on the OnePlus Featuring co-creation platform
This 67W charger is an Apple fan’s retro dream come true
This 38-inch curved Alienware monitor is $450 off (51% claimed)
Alienware teases a monster new 18-inch laptop ahead of CES