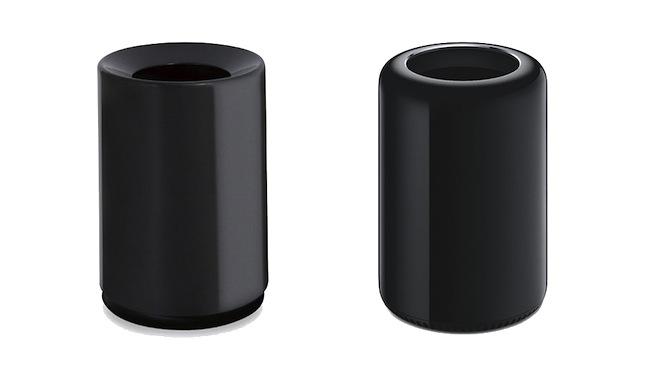 It surely couldn’t have happened like this, could it?

Some time last year Apple’s design chief Jony Ive goes to Japan in search of inspiration for the design of the new Mac Pro workstation.

After a long night spent exploring the neon-drenched streets of Tokyo’s Akihabara electronics district, he returns to his hotel room and starts sketching out ideas on a piece of scrap paper. None of them work. It’s the corners, too many corners and edges. He takes his iPhone from his pocket and asks Siri for some design ideas. After a couple of seconds, she responds with a recipe for Thai-style fishcakes.

Frustrated, he screws up the paper and hurls it at the trash can in the corner of the room. And there it is, bathed in a shaft of light creeping through a gap in the curtains, the perfect design for the next Mac Pro: the Tubelor trash can from Ideaco. He snaps a picture of it on his handset, adds a vignette in iPhoto, and retires for the evening, secure in the knowledge that his search for the design of the next Mac Pro is now over.

OK, it most probably didn’t happen like that at all, but you have to admit, the recently unveiled Mac Pro does bear a striking resemblance to the Tubelor trash can, which, incidentally, launched in 2008 and currently costs 3,504 yen ($36) on Amazon Japan. Has Sir Jony been to Japan recently?

The Tubelor, once minding its own business on some rarely visited page of the e-commerce site, has in recent days become something of an Internet sensation in the Asian nation.

When Apple unveiled the new-look Mac Pro on Monday, some folks in Japan’s Amazon office were quick to notice its similarity to Ideaco’s Tubelor. As a joke, staff tweeted that, no, the Tubelor trash can is not the new Mac Pro, which actually doesn’t come out till later in the year.

The message, and the products’ designs, quickly caught the imagination of Japan’s Twitter community – at the time of writing it’s been retweeted 13,000 times and favorited by more than 3,000 users.

According to Japanese site Kotaku, the trash can is reportedly selling well, steadily making its way up Amazon Japan’s best-seller chart. And just like another of Apple’s products, Ideaco also offers a mini version of its trash can, which, presumably, is every inch a Tubelor.