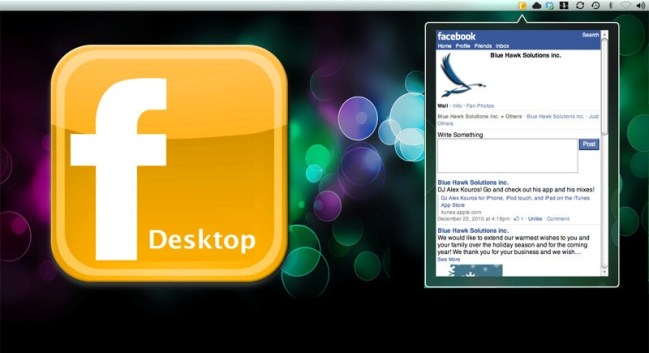 There has been ample talk about Facebook’s future ambitions. We already know it’s taken some of the media content market for itself and is edging in on e-mail. It’s also prompted users to make the site their homepage and there have been suggestions it’s interested in search. Now a new job posting from the company indicates it’s looking beyond your browser.

According to Facebook’s career section, it’s looking for a desktop software engineer for its Seattle team. The position requires candidates to create desktop applications for Mac or Windows systems as well as have a “expert knowledge” of both operating systems, be able to create software that integrates with the Internet, and says PHP knowledge is “a plus.” So what is Facebook building?

The first and most fantastical possibility is that Facebook is building its own Internet browser. There have been rumblings about such an application for awhile, but nothing even remotely concrete has come of them. But even if this job position isn’t intended for such a product, expanding into this arena means Facebook would have the in-house potential for such a project in the future. But being more realistic, we could see being a variety of more rational endeavors.

Facebook has become the destination for photo sharing. The site has made many modifications to how users upload photos as well as an album’s UI. Facebook knows how widely used this platform has become, and perhaps it’s planning to take this popularity and run with it. A desktop application that allows you to upload and tag photos without being logged into Facebook would be a welcome addition to users whose photos are solely bound for the social network anyway. We’re seeing more and more digital cameras integrate with social sites, allowing users to pre-select photos to be uploaded to Facebook, taking one step out of the process. While we’re hypothesizing, maybe Facebook is even interested in adding some very basic editing options – red eye, brightness, contrast, cropping – simple things most users do to their photos before throwing them on the site.

Facebook began experimenting with a desktop notification app for Mac OS x 10.5 back in 2009, but the state of the project has stayed just that: experimental. The job posting advertises for a developer familiar with both Mac and Windows, and maybe Facebook plans to bring notifications (include chat notifications) to all desktops. Enough outside parties are creating their own apps for this purpose that it’s high time Facebook had an in-house option. Earlier this year, Facebook Desktop stole quite a bit of attention for bringing notifications to the right hand corner of your desktop. And it’s not the only one: What’s Up! For Facebook and Facebook Chat Notification are just two of the popular Chrome Web Store clients. It would make sense for Facebook to take some of this success for itself.

Inside Facebook thinks that the site may be planning to capitalize on its control over users’ media activity. The site says that given its investment in entertainment consumption (a possible integration with Spotify, movie streaming, Fan pages, games, etc.), Facebook could be planning to create “desktop software that helps users publish this information… The software could turn users into authors of entertainment content, allowing them to easily post what DVDs or video files they watch, or what songs and artists they’re listening to most.”

Topics
LastPass vs. 1Password: should you switch?
This micro-LED advancement is exactly what AR and VR needs
Dell is having a big sale on business laptops — up to $2,500 off
Best Gaming PC Deals: Save on RTX 3070, 3080, 3090 PCs
New AMD laptop CPU destroys its predecessor, winning by 90%
Lenovo is practically giving away this 2-in-1 Chromebook today
An AI-generated TV channel is mimicking ’90s sitcoms to nightmarish effect
How to overclock Intel’s Arc GPUs for better performance
I asked AI to recreate the best Super Bowl commercials — to hilarious and horrifying effect
Samsung’s crazy rotating 4K gaming monitor is $700 off today
Best Lenovo Laptop Deals: Save up to $2,287 today
Apple may abandon the Mac Studio just 12 months after it launched
The best ChatGPT alternatives (according to ChatGPT)