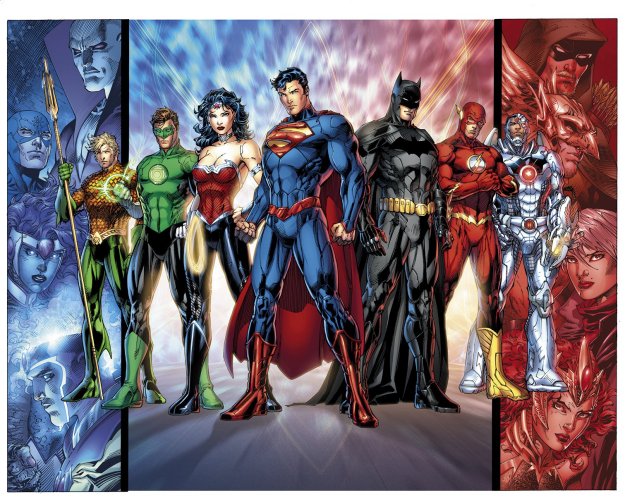 Superman, Batman, and the rest of DC’s superheroes have spent a lot of time in the headlines this week, thanks to a massive overhaul of the publisher’s universe that simultaneously rebooted nearly every character’s history and will see 52 new comic book series kick off this month. And while that’s a pretty good reason on its own for people to take their first jump into (or return to) comics, there’s another element to DC’s big relaunch that makes it even more welcoming.

Along with offering 52 jumping-on points for their massive universe of comics, DC is making every one of them — and future issues — available in digital format via the multi-platform ComiXology app on the same day the print version hits shelves.

Of course, the prospect of checking out 52 new issues in one month can still be a little daunting. Lucky for you, we’ve been known to make a trip or two to our local comic shop (and by “a trip or two,” we mean enough visits to be receiving holiday cards from the staff), and can offer some assistance making your initial foray into the comics scene.

To that end, we’ve compiled a list of 10 comics you should make sure to check out this month (via digital download or *gasp* a trip to the comic shop) to get up to speed with the new DC Universe.

As close as you can get to a “dream team” of comic creators and characters, Justice League is written by one of the primary architects of the DC Universe, Geoff Johns, who’s risen up the company ranks to become the Chief Creative Officer for DC Entertainment. He’s joined by award-winning artist and DC Comics Co-Publisher Jim Lee, a name that should be familiar to anyone who ever picked up a comic book in the 1990s. (Side note: He’s also the Executive Creative Director for the DC Universe Online video game.)

The Justice League is DC’s premiere superhero team, and this new incarnation includes icons like Superman, Batman, Wonder Woman, Green Lantern, Aquaman, and The Flash, as well as one modern-era addition to the team: Cyborg. Like many of the new DC titles, the story is set at a time when many of its main characters are still learning to be the heroes we know them to be, and promises to be one of the most prominent entry points for new readers.

One of the major cornerstones of the new DC comics universe, Action Comics is the flagship title for Superman and his adventures. Writer Grant Morrison is widely regarded as one of the greatest storytellers of the modern comics age, and he previously authored one of the most celebrated Man of Steel stories ever written, All-Star Superman. In this series, he gets to take Superman back to his early days, a year before the Justice League is formed, and start over fresh with the iconic hero.

Given how important this book is to DC’s new line of comics, it will be interesting to see how it jibes with the upcoming Man of Steel movie currently being filmed.

One of DC’s under-the-radar superheroes, Animal Man has generally been one of the publisher’s more quirky, thought-provoking characters, with adventures that alternate between standard super-powered fare and existential, “What is the nature of heroes?” angst. Action Comics #1 writer Grant Morrison authored one of the character’s most memorable runs in the late 1980s, which culminated in Animal Man confronting Morrison himself in a weird sequence of events. Award-winning writer Jeff Lemire takes over Animal Man’s story in this new title, and he’s known for crafting compelling characters and letting readers experience stories through his characters’ eyes. This series could be a nice opportunity to get to know one of the publisher’s more eccentric heroes and experience another aspect of the DC universe.

The Green Lantern movie was a flop, but there’s a reason the ring-wielding superhero has achieved the level of popularity he’s had in recent years. Writer and longtime Green Lantern fan Geoff Johns is a big part of that reason, so you know this series is not only close to his heart, but a great pairing of writer and character for new readers. Comic book fans are already well aware that no one knows Hal Jordan like Johns, and this series offers a great opportunity for new readers to find out exactly why that is.

Beyond the fact that this is Wonder Woman, one of the most famous female superheroes in the comics world, DC’s relaunch of this series is interesting for another big reason, too. Writer Brian Azzarello has indicated that the new Wonder Woman comic is a horror series instead of a standard superhero adventure. The lasso-wielding Amazon has had a rough time of it lately with a failed television series and some hit-or-miss comics, but with DC and their parent company Warner Bros. looking to re-establish Wonder Woman as the most prominent superheroine in the biz, you know they’re doing everything they can to make this new start a good one.

Even though DC considers Action Comics and Detective Comics its primary sources for Superman and Batman solo adventures, respectively, the Batman series kicking off in a few weeks might be your best bet for getting onboard with The Dark Knight. Written by one of comics’ most prominent up-and-coming authors and illustrated by one of the more exciting artists in the industry (Greg Capullo should be familiar to Spawn readers for the visual tone he established on that series), Batman is already generating a lot of buzz and is expected to be one of the sleeper hits of the relaunch.

As you can probably guess, there are a lot more characters in the DC library than the ones appearing in this month’s 52 new titles. DC Universe Presents promises to cast a spotlight on some of the lesser-known heroes (and perhaps, villains?) of the DC universe via shorter stories, then move on to the next character and creative team. The focus of the series’ first arc will be Deadman, a ghost who possesses other characters’ bodies in order to fight evil. With the CW network recently announcing plans for a Deadman television series, it could also make for some timely research material.

If you’re the sort who likes some science-fiction mixed in with your superhero fare, this series could be just the thing for you. Legion of Super-Heroes takes place in the far future, and follows a team of young heroes from different planets around the universe. What’s more, the series is written by former DC Comics publisher Paul Levitz, who’s authored several of the Legion of Super-Heroes’ most memorable stories in the past, and he makes no secret of his love for Chameleon Boy and the rest of the team’s long list of current and former members.

DC’s king of the seas has been the butt of jokes in recent years, and one of the best things about this comic is that it actually seems to be aware of that fact. Early previews of the series hinted at a mix of humor and horror in Aquaman’s new, rebooted adventures, and Geoff Johns has a knack for reinventing ridiculous superheroes as powerful forces for good. Despite his somewhat dubious public perception, Aquaman remains one of the primary members of the Justice League, so it will be interesting to see how the DC team plans to make him relevant for a new readers. Who knows? He could become your favorite superhero by the time the you reach the last page.

If the terrible Jonah Hex movie soured you to Westerns, this might be exactly what you need to get back in the saddle. Possibly one of the biggest tragedies of the live-action movie’s failure was that it distracted from the great stories co-writers Jimmy Palmiotti and Justin Gray had been telling for years in the Jonah Hex comics. The pair have practically become synonymous with gritty, two-fisted tales from the Wild West corner of the comics universe, and there’s no reason to expect their dominance of the genre will falter any time soon. If you enjoy a whiskey-soaked Western that doesn’t pull any punches, this as close to a sure thing as you get in the comics world.

Unless otherwise specified, each of the comics listed above will be available for digital download on ComiXology at 2pm EST on the day the issue is available. Thanks to PanelsOnPages.com and Metro Entertainment for updated lists of creative teams and release dates for each comic.