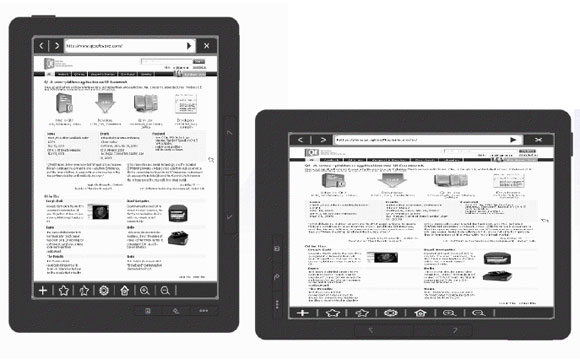 E-Readers were a hot commodity this CES season—with over a dozen new models revealed—but not all of 2010’s e-readers made their debut at the Las Vegas Tech tradeshow.  Taiwanese manufacturer Asus has gave InGear exclusive details of its new DR-570 reader yesterday and then today released some other details on another 9-inch e-reader ultimately confusing most tech writers. Asus said yesterday that it has developed a 6-inch, high-brightness, OLED color-screen e-reader that will run for 122 hours under real-world conditions–meaning it would be running programs such as Flash video over its built-in Wi-Fi or 3G—all on only one battery charge. Then Asus was like “oh yeah, we also have this 9-inch one that’s way cooler and will come out sooner.”

So, there are two Asus e-readers: the DR-570 and the DR-950. Very few details have been leaked about these e-readers, but today there were some major information spills on Asus’ new devices. The ElectricPig.co.uk claims the Asus DR-950 has a 9-inch Sipix panel and packs a 1024×768 resolution display, offers RSS feeds, translation and text-to-speech, 2 or 4GB of internal memory, and an SD slot, Wi-Fi and HSDPA or even WiMax, plus a USB port for sideloading, a 3.5m audio port for music. The Asus DR-950 will also support PDF, TXT, Audible, MP3, ePub, HTML, JPEG, GIF, PNG and BMP file formats.

The same sight also reported that the rumored 6-inch e-reader, the DR-570 will sport a 5.7-inch OLED display, boasts a sharp 768×1024 resolution with a 0.03 second refresh rate, 4GB of flash storage, 412MB of RAM, a 1530mAh battery and an SD/SDHC card slot, and it weighs just 200g. The Asus DR-570 will also be quite the multimedia machine—supporting ePub, PDF, TXT, MP3, MP4 and AVI files and play back Flash videos. The devices are expected to be out at the end of 2010, with the DR-950 launching sooner than later.

5G-enabled billboard in Times Square briefly brings interactive game to masses
Three things the Microsoft Surface Duo 2 needs to succeed
Apple iPhone 13 buying guide: Release date, price, specs — everything we know
This tech was science fiction 20 years ago. Now it’s reality
Why are so few people actually using 5G in the U.S.? Here’s what the experts say
Sustainable with Google 2021: Nest Renew, traffic light efficiency, and more
The 20 most outrageous and fantastic James Bond gadgets of all time
AirPods 3 could finally debut at Apple’s Unleashed event on October 18
Scientists think the next big solar storm could create an ‘internet apocalypse’
Need a last-minute Halloween costume? Check out these 3D-printable getups
Siduri Wines blends wine and tech in the ultimate sweepstakes experience
The funny formula: Why machine-generated humor is the holy grail of A.I.
How far away are we from mainstream 5G home internet?