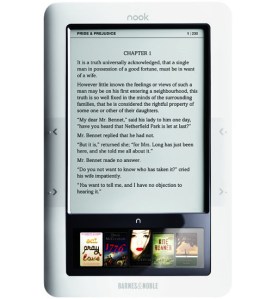 In the latest salvo in the escalating eBook wars, Barnes & Noble recently announced it was standardizing on the open ePub and PDF formats, embedded with “social” digital rights management (DRM) content protection.

With this move, B&N is embracing the cross-platform Adobe solution accepted by nearly 100 providers, including Sony (announced in August it plans to convert its eBooks to the ePub format by the end of 2009).

However, that group does not include market-leader Amazon, which debuted its popular Kindle 2 in early 2009. Kindle 2 eBooks are available in Amazon’s proprietary AZW format, as well as support for PDF, HTML, DOC, JPEG, GIF, PNG, BMP through conversion.

This running battle between Amazon and everyone else is driving down prices, fueling better retail distribution and drawing massive media attention-all factors cited when Forrester Research revised its 2009 sales projections last month on eReaders by a stunning 50 percent.

Forrester now expects that three million eReaders will be sold in 2009 (the previous projection was two million), with 30 percent alone bouncing off the shelves during the holiday season. What’s more, for 2010, Forrester projects even more dramatic growth of eReader sales, of up to 10 million units.

The ePub move makes sense for B&N to grab market share from powerhouse Amazon. Producing books under one standard already adopted by other eReader device manufacturers is attractive to consumers. For one, consumers can transfer eBook collections across various devices, important for preserving their purchases should their manufacturer discontinue support. And, by adding password-based content protection for ePub, Adobe addresses piracy concerns, but delivers a less onerous DRM option.

The announcement was part of a larger PR push to publicize B&N’s late October launch of its of wireless nook eReader, a $259 device featuring an electronic ink display and 3G wireless connectivity to its online bookstore.

With this move, the nook now goes head-to-head with the entrenched Kindle. However, while it also competes for device sales with many other manufacturers, such as Sony, in terms of the actual eBooks, it does not force a Blu-Ray-versus-HD-DVD-format-type purchasing dilemma.

The nook also features an ability to share books among friends, which Kindle does not. Users can lend some eBooks, but not all, to a friend’s nook/computer/mobile phone for up to 14 days.

Comparatively speaking, based on its DRM system, not all Kindle books can be re-downloaded, a sticking point even with some fans. For those that can, all Kindle eBooks include limits on the number of re-downloads and those limits vary per book.

In all fairness, publishers actually establish the DRM limitations for each book. Still, Amazon does stand to benefit when a Kindle user has to re-purchase an eBook.

For its part, Sony is slated to release a new eBook reader in December, dubbed the Reader Daily Edition, the first Sony eReader with wireless 3G connectivity.

About the ePub Format

The xml-based format is meant to function as a single format that publishers and conversion houses can use in-house, as well as for distribution and sale. It superseded the Open eBook standard.

Meanwhile, DRM on some eReaders requesting credit card verification has been a sticking point, while other purists lament that any restriction literally violates the spirit of an open standard, such as ePub.

Still, as with the music and film industries, publishers are concerned that selling content without DRM would leave the industry open to widespread piracy.

“Through these standards, publishers will be able to protect ePub and PDF eBooks through either social password or identity-based authentication options, allowing their readers access to interoperable eBook content across diverse platforms,” says Doug Gottlieb, vice president of digital products for Barnes & Noble.com. “Standards are good for everyone. They enable more supported eReading devices from which to choose, and these options allow device manufacturers to focus on innovation and differentiation of their products to better serve their customers.”

Format standardization is critical for long-term accessibility to eBook purchases for customers across the increasing universe of devices available for eBook reading, says Bob LiVolsi, president and CEO, BooksOnBoard, which was among the first retailer to offer ePUB standard eBooks from the major publishers in June 2008 when they were first available.

“It’s reassuring to see validation of the standards from the large corporate players in the eBook space,” LiVolsi says. “Standards reduce costs to the publishers, allowing them to keep costs down for consumers and broaden selection. With fewer formats to create, an expensive investment for a publishing house, publishers can digitize more and more backlist titles, allowing for the digital dream of an infinite bookshelf where titles never go out of print.

The ePUB standard also reduces consumer costs by allowing readers to read the same eBook on many devices without having to buy it again in another format.

“They can easily share these books among friends and family, bringing sharing options that are device neutral,” Livosi says. “They can now spend the same or less on a netbook and have full computing power, full software suites and a backlight for eBook reading that fits in a large purse or small briefcase.”

Livosi says many BooksOnBoard customers report crawling into bed with their netbooks from HP, Dell, Acer, ASUS and others, reading under the covers with a backlight.

“They’re typically hooked up to their home wi-fi, downloading another book in seconds as soon as they finish one in the middle of the night,” Livosi says. “The ePub standard allows them to read that same book on their office computer the next day or on a dedicated eBook reader, which never has a backlight because of e-ink limitations, on their commute.”

Adobe ePUB is also a big leap forward for B&N’s credibility in the space. “They still use the outdated eReader/Palm format – and will continue to do so until ePUB is deployed in their store – which requires users to enter their credit card number to unlock an eBook to read it,” Livosi says. “This is cumbersome, requires remembering what credit card was used to purchase a book in the distant past, causes customers to worry about the security of their credit card information, and is one of the reasons why almost 70 percent of BooksOnBoard customers choose the Adobe format, which uses a more secure, and shareable, activation system that requires disclosure of no private information.”

Meanwhile, with hundreds of actual stores across the US, B&N has the advantage of putting its eReader physically in front of its customers. However, that becomes less of an advantage as more US retailers-now including Best Buy, Costco, Target and Walmart-stock eReaders. Not to mention, Amazon still has a sizeable head start, a popular product, and a strong following-market advantages that will not quickly evaporate, even if it does not adopt ePub.

For now, though the Association of American Publishers cites eBook sales since June have gone up 149 percent for the year, throwing off some $14 million in sales every month, it represents a small fraction of the receding $25 billion publishing market.

Still, a large portion of that is destined to migrate to the digital format. It is only a matter of time.

Craig McGuire is a New York City-based journalist who covers business and technology. He can be contacted at Craig@ByCraigMcGuire.com.