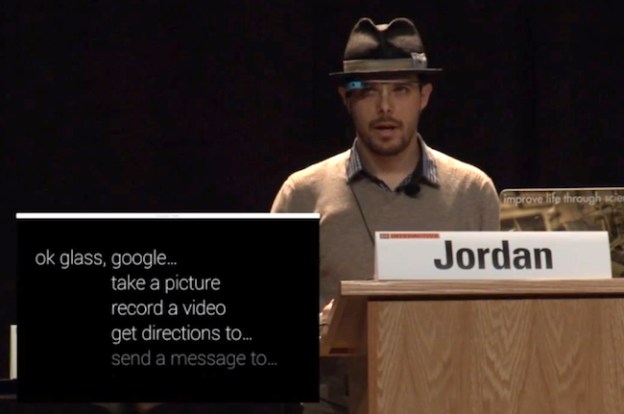 If you’re heavily into Google Glass and are biting your nails to the quick in excited anticipation of the day you’ll be able to perch the futuristic device on the end of your schnozzle, you’ll be interested to know that Google has just posted a video (below) of the Project Glass presentation made at last month’s SXSW event in Austin, Texas.

The Web giant made the 50-minute video available on Thursday, explaining that it hoped it would “help developers and entrepreneurs start imagining what they could do on Glass.”

The Building New Experiences with Glass session, which took place on March 11, was conducted by Google developer advocate Timothy Jordan. The Glass ambassador begins by telling the audience that Project Glass “is about our relationship to technology – it’s about technology that’s there when you want it but out of the way when you don’t.” In other words, it’ll be a lot more convenient than a smartphone as you won’t have to waste time fumbling about in your bag looking for it.

To further explain the thinking behind Glass, Jordan also talks about a moment at a party the previous night when everyone held up their handsets and tablets to record a particular incident. “It was weird, it felt like they were watching these screens instead of the event….it feels like tech is getting in the way more than it needs to.” Essentially, as Jordan says, the point of Glass is to “give you access to the technology you love [without taking] you out of the moment.”

The session includes a live demonstration of the high-tech eyewear, information on the project’s Mirror API, a summary of what Glass developers have learned about the project over the last few months, and finally, some examples of Glass experiences developed more recently.

For anyone that wants to cut straight to the demo, you’ll find the first one at the 10:50 mark.

The weirdest tech we spotted at CES 2022
CES 2022: The biggest news and announcements so far
If You Hold Crypto, You NEED a Wallet like Ledger, Here’s Why
The best portable power stations
Three things the Microsoft Surface Duo 2 needs to succeed
Why are so few people actually using 5G in the U.S.? Here’s what the experts say
5G-enabled billboard in Times Square briefly brings interactive game to masses
Sustainable with Google 2021: Nest Renew, traffic light efficiency, and more
The 20 most outrageous and fantastic James Bond gadgets of all time
AirPods 3 could finally debut at Apple’s Unleashed event on October 18
Scientists think the next big solar storm could create an ‘internet apocalypse’
Need a last-minute Halloween costume? Check out these 3D-printable getups
Siduri Wines blends wine and tech in the ultimate sweepstakes experience