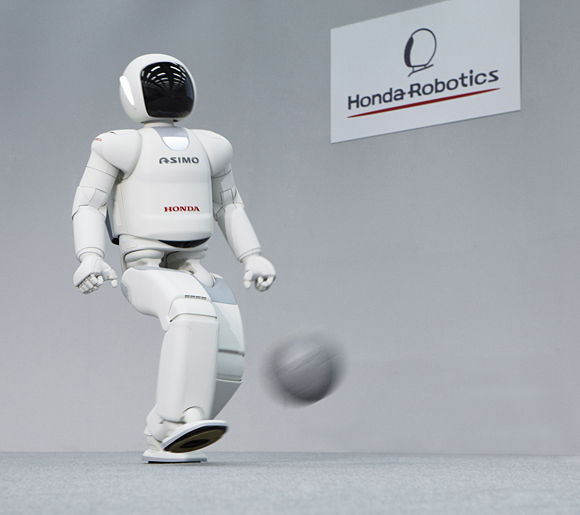 A few years ago Honda’s ASIMO robot humiliated the Japanese car company when it demonstrated how well it could tumble down stairs, when it was supposed to walk up them.

Whether the engineers that made that ASIMO ended up on the scrapheap along with their failed invention isn’t known, but what is clear is that ASIMO is back.

At a press conference held in Tokyo on Tuesday, Honda unveiled an all new ASIMO robot – one that can run, walk across bumpy surfaces, hop, and even pour a coffee. There was no sign of those stairs though.

The original ASIMO promised much when it was first unveiled back in 2000 but ended up being looked upon as a rather novel high-tech toy, offering little in the way of practical use.

However, according to the Washington Post, Honda researchers have been hard at work with the astronaut-looking ASIMO, determined to prove its worth. On Tuesday Honda president Takanobu Ito told a gathering of journalists that technology associated with ASIMO has been developed to make a robotic arm which can be used, for example, to open and close valves at the stricken nuclear power plant in Fukushima.

The original idea had been to send ASIMO itself into the damaged plant, but engineers quickly realized that the robot – even the new version – wouldn’t be able to navigate the rubble. Stairs, maybe. Rubble, definitely not. So the company developed the robotic arm instead.

ASIMO’s running speed has also improved, increasing from 3.7 mph in 2005 to 5.6 mph today. According to the Post, its running style was a lot smoother than before, too.

It could even identify different voices speaking at the same time and respond to different instructions from each one. And if all that wasn’t enough to demonstrate that ASIMO had made some significant improvements, it even engaged in a spot of sign language. “My name is ASIMO,” it said with its fingers.

Honda’s president said he knew that much more time would be required to make robots into a practical business, telling reporters, “Maybe at the start this was a dream of engineers to make a machine that was close to a human being, like Astro Boy,” adding “We think ASIMO is good.”

Comparing the stairs video to a news piece broadcast in Japan on Tuesday, the humanoid robot has certainly come a long way. But you really would’ve expected the car company to have sent ASIMO up the biggest staircase ever, just to prove a point.