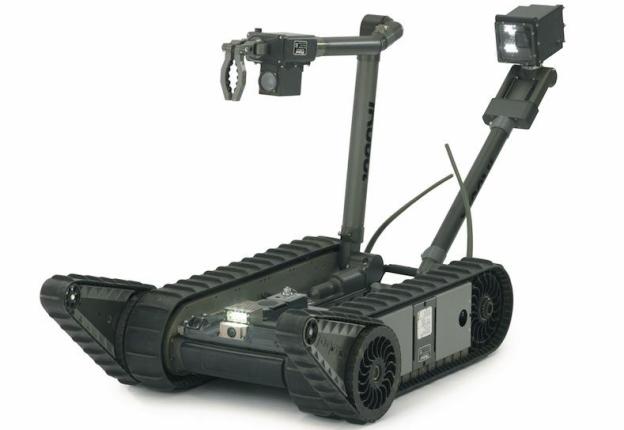 Brazil has evidently decided to take a high-tech approach to security for next year’s soccer World Cup with news that the nation’s government has signed a $7.2 million deal with Massachusetts firm iRobot for 30 of its PackBot military robots.

With multiple high-res cameras that enable it to explore potentially dangerous environments while keeping the operator out of harm’s way, the PackBot will, for example, be able to examine suspicious objects in and around stadiums in each of Brazil’s 12 host cities during the month-long sporting event. Its ability to take on a raging drunk soccer hooligan coming at it with a flagpole, however, may be limited.

The advanced robotic device weighs around 24 pounds and features eight payload bays, an on-board computer with overheat protection, two-way audio, and a highly versatile mechanical arm with a gripping hand – on second thoughts, that gripping-hand mechanism could, if you use your imagination, be the ideal tool for helping to subdue the aforementioned hooligan.

A single PackBot unit costs in the region of $150,000 and is described on the company’s website as “one of the most successful battle-tested robots in the world” thanks to its ruggedness, adaptability and reliable performance. The remotely operated vehicle has a top speed of 5.8 mph and is able to climb steps, make its way across rubble and comfortably navigate narrow passageways.

The PackBot was the first remotely operated robot to enter the devastated Fukushima nuclear facility following the Great East Japan Earthquake and tsunami in March 2011.

iRobot, a Bedford, Massachusetts-based company that was founded in 1990, has already successfully deployed over 5000 PackBots to military and civil defense forces around the world – including in Iraq and Afghanistan – though this latest contract will result in their first outing at a World Cup event.

Roving surveillance bots are coming to our cities. Luckily, they’re here to help

9 military robots that are totally terrifying … and oddly adorable