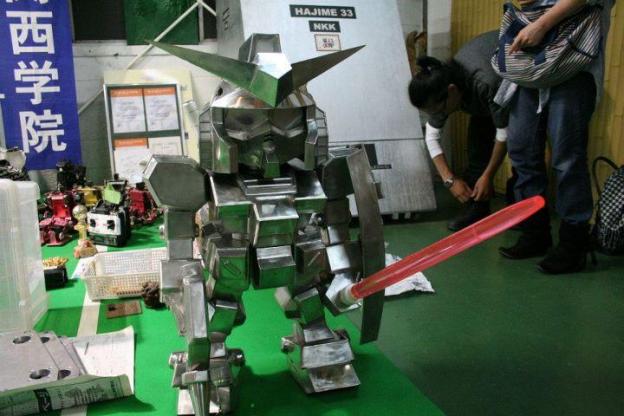 Hajime Sakamoto, president of the Osaka-based Hajime Research Institute is working to make Gundam fan’s dreams a reality. His latest project, already underway, is a mobile 13-foot robot with a cockpit within for a human pilot

Development on the 13-foot mobile robo suit began in 2010, though the Japanese company has been churning out humanoid robots since 2002. The robots are slowly getting larger as well; in 2007, Hajime Robot 25 was three feet tall, and in 2009 robot 33 was seven feet tall, reining as one of the largest humanoid robots in the world.

The giant robot from HRI aims to be the largest in the world and will be able to do bipedal walking, though at the moment only one leg has been finished. The company is currently looking for sponsors to jump in and help with the project. NKK Kyousei and various contractors are working to build the giant robot’s parts.

Why would someone want to unleash a giant, possibly destructive, robot suit into the world? Cnet points out that the Hajime Web site’s philosophy, developed in 2002, is “to cheer people by dream power. We provide a dream to people through robotic technology.”

The 13 foot Gundam tribute may seem amazing enough, but Hajime Sakamoto’s dreams rest far into the future. The HRI president is a devout fan of Gundam and aims to make a working version of the now-dissasembled, 59-foot giant mecha in Shizuoka, Japan which was created as part of the anime series’ 30th anniversary. HRI plans on creating a 26-foot robot to lead up to the final giant Gundam suit, which the company president hopes to complete in eight years, just in time for the Gundam series’ 40th anniversary.