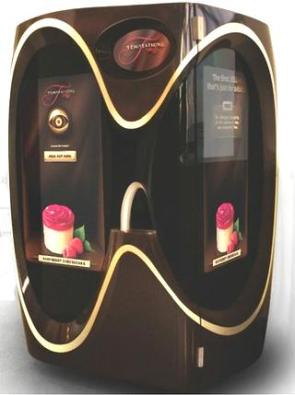 Forget smart phones, how about a smart vending machine? Food giant Kraft recently teamed up with Intel to produce the iSample vending machine, capable of studying what kinds of people are buying their goods.

The technology comprises an optical sensor fitted at the top of the machine that sends information about the shopper’s face to a computer running software capable of working out the person’s gender and age.

The iSample machine being trialed by the two companies does as its name suggests – offers samples of products. In this case, it’s a jelly-based dessert called Temptations, marketed with the strapline “the first Jell-O that’s just for adults.” That’s right, an adult-only jelly-based dessert.

Children that attempt to obtain a dessert from the machine will be out of luck. The on-board computer will detect that a non-adult is pressing the buttons and politeley refuse to hand over a sample. This is all going to end in tears, isn’t it.

The computer will ‘read’ the adult’s face and place them in one of four age groups before serving the appropriate dessert, though how Kraft have matched age with particular types of jelly dessert isn’t entirely clear.

Kraft’s Ed Kaczmarek told the BBC that the company is currently testing out two iSample machines – at the Shedd Aquarium in Chicago and South Street Seaport in New York. If it’s a success the company hopes to introduce more.

Kaczmarek added, “We can do so much more with the iSample program. Tied to specific marketing campaigns, we can customize the experience in order to reach out to consumers more efficiently.”

The smart vending machine could also be used to provide data about which consumers are buying which products, and could prevent the sale of age-restricted goods to children.

Intel’s Michelle Tinsley suggested other ways in which the technology could be used. “We can measure dwell time. So we can tell in an advertising or signage use of this technology, did they look at the screen for a fraction of a second or for 20 seconds….it’s helpful for the advertiser to know of the people who looked at the sign or the ad, how many saw the full advertisement.”

It all sounds promising, but the kids will only be happy if they can get their hands on that jelly-based dessert.