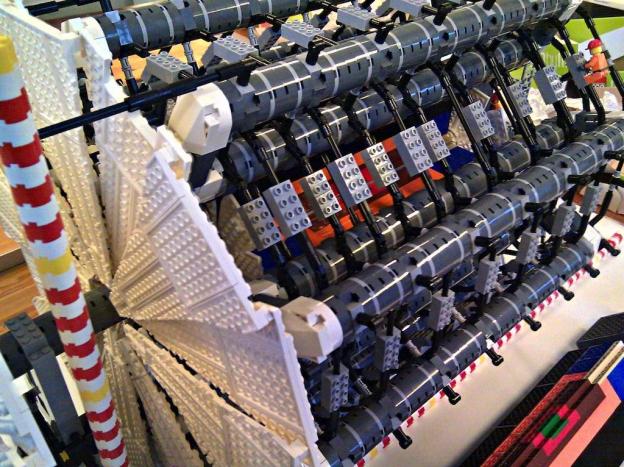 The King of Lego Geeks crown must go to physicist Sasche Mehlhase from the Niels Bohr Institute; at the very least he deserves a nomination. Mehlhase has created a detailed Lego model of the ATLAS detector, which is part of the ATLAS particle physics experiment at the Large Hadron Collider at CERN. ATLAS is one of the two general-purpose detectors at the Large Hadron Collider.

The model is part of an outreach project at the Niels Bohr Institute to promote interest in physics, and Sascha hopes that the model will be a great “eye-catcher” for all ages. All the details of the ATLAS detector are illustrated, including the muon and magnet systems as well as the pixel detector.

The Lego ATLAS detector is made out of 9500 pieces and is roughly 1:50 in scale; the little Lego scientist is supposedly quite close to the comparative size of a real scientist. The project cost a whopping 2,000 Euros (close to $2,600), paid for by the high energy physics group at the Niels Bohr Institute.

Though he does not have a straight-forward construction manual at the moment, the Copenhagen resident says it took him 81 hours to complete the model; 48 of those hours creating a 3D computer blueprint, and 33 to put the model together. Mehlhase’s wife and his students all pitched in to sort and assemble the smaller parts of the model.

The ATLAS detector is just the start of Sascha Mehlhase’s Lego crusade. The LHC model is currently at the Niels Bohr Institute on Blegdamsvej 17, but there are plans to create different versions at different locations.

“There were moments during the entire process which were not fun, but the overall process was enjoyable and informative,” says Sascha.

The Lego ATLAS detector creator has contacted the Copenhagen Lego store for possible funding to promote learning, but the company hasn’t responded to his proposal yet. Perhaps the Lego Cuusoo route or Kickstarter route could give his proposal a little more traction.