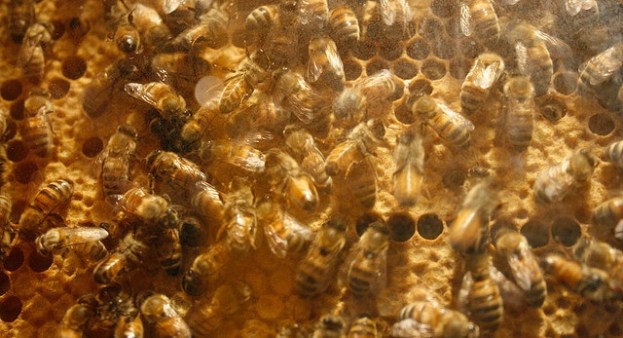 The honeybee population has been steadily on the decline for decades. Though it’s not quite understood why the bees are dying off, scientists have decided to breed “super bees” in order to ensure the survival of these important insects. Researchers are hoping that by breeding for strength, these new super honeybees will be resistant to the many factors that have contributed to the population decline.

The reason why all this fuss is being raised about these little insects is because bees are essential to the world’s food supply and economy; 90% of the world’s food crops are pollinated by bees. According to the U.N., each year viruses and mites kill off 85% Middle Eastern bees, 30% of European bees and close to a third of American bees. Mites are particularly insidious since they latch on to honeybees, slowly drain their blood and then go to work on larvae crippling bee populations at the source. If the larvae survive the attack, they come out as weak and broken adults.

Aside from viruses and mites, other factors have been suspected of causing the sharp population decline recently; from pesticides to climate change to even rampant cell phone use. Rather than invest in pesticides or address any one of these factors, researchers at the University of Manitoba in Winnipeg have decide to breed for bees that can withstand enemies on all fronts.

Using Canadian bees as prototypes for the master bee race, the researchers have been shipping queen bees from mite-resistant hives to the other end of Canada. The travel ensures “disease pressure” and supposedly leaves behind the strong survivors. These Canadian bees are also more winter resistant compared to European honeybees who survive with only 46% of their population intact.

Though this is not as panacea as Fast Company points out, these Canadian super bees could help buy scientists more time to sort out the confusion and figure out a more permanent solution to the crises.

Throwable ‘seed bombs’ sprout wildflowers that support our dwindling bee population
Australian researchers are attaching sensor-stuffed ‘backpacks’ onto honey bees, for science
Three things the Microsoft Surface Duo 2 needs to succeed
Why are so few people actually using 5G in the U.S.? Here’s what the experts say
5G-enabled billboard in Times Square briefly brings interactive game to masses
Sustainable with Google 2021: Nest Renew, traffic light efficiency, and more
The 20 most outrageous and fantastic James Bond gadgets of all time
AirPods 3 could finally debut at Apple’s Unleashed event on October 18
Scientists think the next big solar storm could create an ‘internet apocalypse’
Need a last-minute Halloween costume? Check out these 3D-printable getups
Siduri Wines blends wine and tech in the ultimate sweepstakes experience
The funny formula: Why machine-generated humor is the holy grail of A.I.
How far away are we from mainstream 5G home internet?