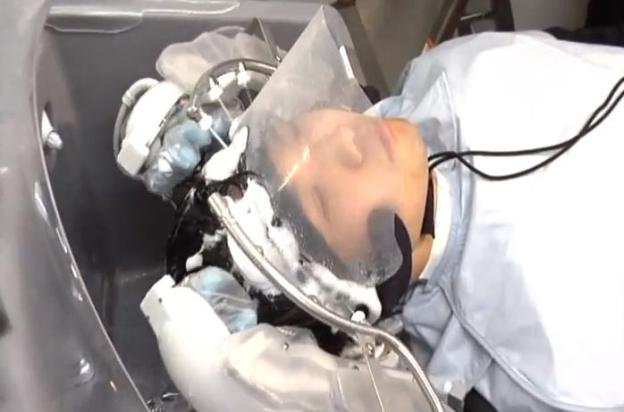 If Panasonic has its way, a simple trip to the barber shop could soon involve a hair wash given not by a human but by a robot.

The company has already made significant progress with the development of its special robot and is now testing it in a hair salon in central Japan.

Featuring what it calls “advanced scalp care” capabilities, the robot incorporates 24 “fingers” — eight on the right side, eight on the left side and eight under the neck — and begins a hair-washing session by feeling the person’s head to gauge its precise shape and size.

Besides having the ability to deliver a decent hair and scalp wash, the robot can also work conditioner into the hair, dry it off and give a head massage.

A Panasonic video (you can check it out below) demonstrating the Japanese company’s innovative robot shows a brave volunteer having his hair and head vigorously rubbed by the robot’s articulated fingers. When the wash is over, the robot then gently massages the volunteer’s scalp.

“This is extremely relaxing and offers a degree of comfort that users can not experience with human hands,” the video’s narrator says.

Whether the robot will one day end up in hair salons across the country isn’t clear, though Yukio Honda, director of Panasonic’s robot development center, said there are definite plans to supply it to hospitals and care facilities in the near future, providing support for staff.

Would you be happy to place your head in the hands of a 24-fingered robot or are you someone that, on a visit to the barber shop, would prefer to have human digits working their way over your scalp?

At least if things begin to get a bit uncomfortable you can politely ask a real person to go a little easier whereas presumably the same words said to a robot would simply fall on deaf microchips.

This tech was science fiction 20 years ago. Now it’s reality