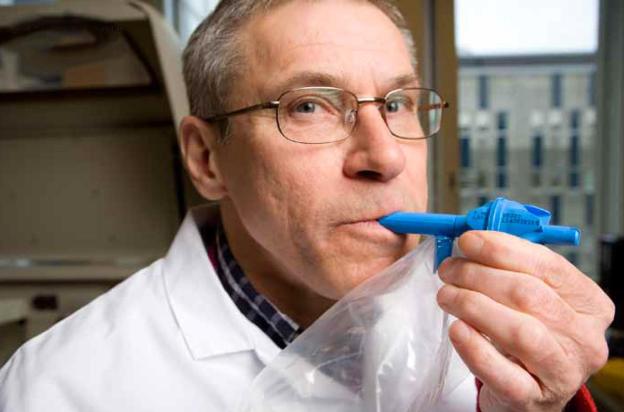 Thanks to technology, the fuzz have a wealth of different ways to catch you driving under the influence. But simply catching you driving like a buffoon isn’t the problem. Anybody with eyes can tell that that the guy doing 95 and peeing out his sunroof probably had one too many daiquiris at karaoke night. The problem is proving that you’re actually under the influence.

Booze is one thing. Cops have all kinds of neat little tricks and gizmos they can use to determine if you’re drunk. The Horizontal Gaze Nygstamus test, the Walk-and-Turn test, the One Leg Stand test (not to be confused with the One Night Stand test, which can also lead to handcuffs, awkward positions, and waking up in a strange place next to somebody you don’t recognize), and the infamous breathalyzer test – they’re all great for revealing just how plastered you are. They’re just not so good at telling when you’ve just, say, taken a few too many bong rips, or perhaps gakked up a couple lines of grade-A Colombian blow.

But that’s all about to change. Thanks to some clever research from Swedish scientists, Johnny Law will soon be able to tell when you’ve been smoking Mary Jane. Just this past week, researchers at the Stockholm’s Karolinska Insititute announced that they successfully detected a wide range of drugs using simple breath analysis tests. The researchers recruited 47 subjects from Stockholm Drug Emergency Clinic and collected blood and urine samples from each of them to use as a baseline for the experiment. They then had the subjects blow into a device called SensAbues to collect the contents of their lungs, which were then parsed using chromatography and mass-spectrometry techniques.

In all of the tests, the researchers were able to accurately detect more than nine substances, including amphetamine, methamphetamine, morphine, heroin, THC, Diazepam, Oxazepam, cocaine, and benzoylecgonine. And that’s just counting the ones that were accurate enough to be touted commercially. In addition to those nine substances, researchers using SensAbues could also detect buprenorphine, Codiene, MDMA (ecstasy), Methadone, Nicotine, Continine, Zolpiden, and MDPV (bath salts), albeit with much less accuracy.

They have yet to gain widespread use by law enforcement agencies, but given the fact that SensAbues systems are already commercially available, we wouldn’t be surprised to see them make their way into the US within the next few years. You can check out the full study in the Journal of Breath Research here, but you’ll need an account to get full access.

Michigan is the first state in the U.S. to ban flavored ecigarettes
On your mark. Get set. Blow: The race to build a breathalyzer for weed
Are e-cigarettes safe? Here’s what the most recent science says
Like a breathalyzer for exhaustion, new blood test can tell how tired you are
The best light therapy lamps
CES 2022: The biggest news and announcements so far
Taco Bell’s Xbox Game Pass-style pass will put a taco in your belly daily for $10 a month
The weirdest tech we spotted at CES 2022
K-pop NFTs are here, but I’m not convinced they’re worth it
Solving VR’s ‘infinite walking’ problem with moon boots
Fighting football injuries with 3D-printed, hyper-personalized pads
Inside the U.K. lab that connects brains to quantum computers
ClipDart is an on-demand barber app aimed at people of color