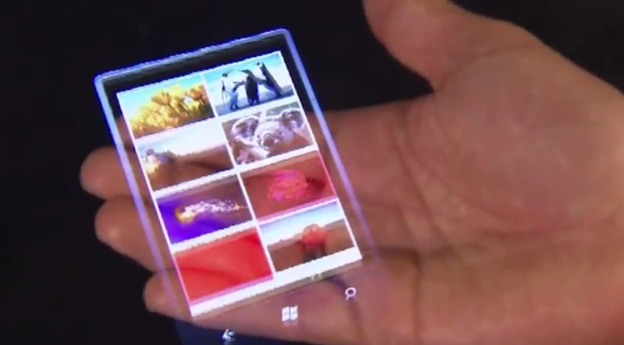 It looks like Microsoft is really focusing on new, and more natural ways for people to interact with technology. What started with the popular Kinect controller for the Xbox 360 has led to a project dealing with a holographic desk. The system uses a Kinect, a project, and a webcam to track the user’s face.  There isn’t much information provided about the early stage project, but there is something even better than information, a video of it in action.

The video really is impressive how the user is able to interact with holographic objects in a 3D space. You can see the user tossing a virtual ball from hand to hand, and lifting and manipulating objects in a realistic fashion that aren’t actually there.

The example that really amazed us would have to be when they were showing the potential to use the holographic desk to test early prototypes. The user is able to pick up a virtual phone, Windows 7 phone of course, and was able to interact with the touch screen of the phone.

We saw earlier this week that Microsoft is also working on a technology that they are calling OmniTouch. OmniTouch uses a projection screen and a 3D camera to turn any surface into a touch interface. With OmniTouch and the Holo-desk it is clear that Microsoft is investing a lot of time and money into natural user interface technologies.

As impressive as the HoloDesk looks in prototype form it clearly has a lot of work before it can be used in a real world setting, but it isn’t hard to see the massive potential of this technology.

The best portable power stations
5G-enabled billboard in Times Square briefly brings interactive game to masses
Three things the Microsoft Surface Duo 2 needs to succeed
Apple iPhone 13 buying guide: Release date, price, specs — everything we know
Why are so few people actually using 5G in the U.S.? Here’s what the experts say
Sustainable with Google 2021: Nest Renew, traffic light efficiency, and more
The 20 most outrageous and fantastic James Bond gadgets of all time
AirPods 3 could finally debut at Apple’s Unleashed event on October 18
Scientists think the next big solar storm could create an ‘internet apocalypse’
Need a last-minute Halloween costume? Check out these 3D-printable getups
Siduri Wines blends wine and tech in the ultimate sweepstakes experience
The funny formula: Why machine-generated humor is the holy grail of A.I.
How far away are we from mainstream 5G home internet?