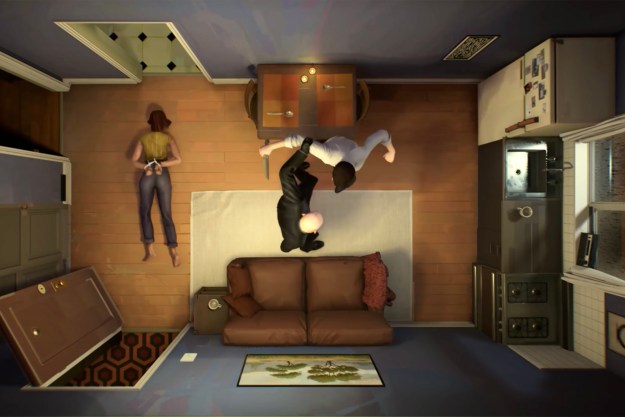 “Experimental and unique, 12 Minutes forgoes some classic gaming standards in favor of a stylized, cinematic approach.”

12 Minutes is a rarity in gaming. It’s not like much else out there, with its unique take on the now ever-popular time-loop cliché and an all-star cast of voice actors. In fact, despite not having a single cutscene, 12 Minutes may be one of the most cinematic games I’ve played in quite a while. It’s excessively stylized and practically written like a movie. Luis Antonio, the creator of 12 Minutes, leaves his mark on the game like a director would on his debut film.

While 12 Minutes has all the appearance of a movie, it’s not one — and its traits as a game are what ends up letting it down. That’s not to say it’s a bad experience. It’s experimental and quickly sucks you into its mystery. I was overjoyed listening to the performances of James McAvoy, Daisy Ridley, and Willem Dafoe (especially Willem Dafoe), but because of 12 Minutes‘ core loop mechanic, they stopped being a source of immersion and became one of irritation. To put it plainly, 12 Minutes doesn’t execute everything a video game should have with perfection. However, it’s a departure from the norm, and while it fails in some cases, it exceeds in others.

A night at the movies

12 Minutes isn’t complicated at first. You’re a man, some nameless schmuck who’s seemingly living a charmed life. You have a wife who loves you, and she surprises you with news that she’s pregnant. However, an officer shows up, puts the two of you in handcuffs, and kills you. Then you’re back in your apartment, minutes before the cop shows up. The goal of the game seemingly is to escape this loop.

But 12 Minutes‘ style isn’t like most games. It’s a point-and-click game with an almost entirely top-down camera angle. It’s the first instance of the game’s style clashing with its function. The top-down perspective is jarring and makes the feeling of being trapped in a time loop more constraining. Your apartment isn’t that big, but once you can see it from an eagle-eye perspective, you realize how small it is, lending to that sense of claustrophobia.

And while that’s an impressive use of a top-down perspective, in practice it makes the game somewhat harder. There are times where you’ll be looking for something, unaware that it’s hidden under another object, or that you need to look at another object to see something else. That’s the case for one of 12 Minutes‘ key items, a pivotal trinket that can change the course of the game. I found it out of dumb luck, but anyone else may be stuck for much longer looking for it.

Since the game loops, when you miss your window or perform an incorrect action, that’s it, you have to restart.

That doesn’t sound too bad, but consider that the whole of 12 Minutes took me around five and a half hours to beat. That’s counting the few times that I ended up getting stuck and had to search around for the next clue in the puzzle. The downside is that when you get stuck, it’s not just one area you have to search around. It’s a point of time you have to reach. Since the game loops, when you miss a window or perform an incorrect action, that’s it, it’s time to restart. Thankfully, getting back to the beginning of the loop is as easy as walking out of the apartment.

Once more, from the top

The hard part comes after that, when you have to listen to the same voice lines over, and over, and over again to reach the right moment in the loop. The first time through, I was impressed listening to McAvoy and Ridley play off of one another as a married couple — one half of which was seemingly stuck in an impossible situation. Dafoe is the star here, though, showing the wide range he’s developed during his decades in movies. His gruff, furious character turns vulnerable and then paternal with ease, showing off one of the best voice acting performances I’ve heard in games.

Dafoe is the star here, though, showing the wide range he’s developed during his decades in movies.

But eventually, those carefully written, exquisitely performed lines stopped being something I paid attention to. When I was stuck, all I could think about was getting to where I had to be to solve the puzzle. Thankfully, 12 Minutes will let you skip its dialogue, but even reaching where I had to be simply took too long. It got to the point where I’d look at my phone while clicking my mouse, waiting for everyone to finish talking.

That’s not even touching on the repetitive actions that players have to go through at times. If you’re stuck or trying to figure out if you missed something, you’ll have to perform the same actions countless times. Pick up the same items, combine them again, place them in the correct spots. Once you’ve done it for the third time, it becomes clear why someone in a time loop can easily lose their marbles. You’re performing the same acts over and over, expecting something different. I think a certain antagonist once had some words about doing that exact thing.

By the time I finished 12 Minutes, I was left with a bittersweet feeling. The game’s story wasn’t wrapped in a bow; it left me questioning even more. I didn’t know if my choice fixed the story’s main conflict, a twist that genuinely made me gasp. 12 Minutes‘ story, presented cleanly, is a gripping piece of work. But with the game strewn around it, with all of its conflicting parts, I felt that I’d rather read 12 Minutes than play through it again.

12 Minutes is, by all means, an extremely cinematic title. It’s slow going by nature, and eventually, that will wear players down. There were nights when I had to turn the game off because I was faced with another run through the loop after not finding something. The first time you go through some of the game’s unique permutations, however, you’ll be mesmerized. Its story is gripping and leaves you questioning everything, but getting it to progress is a hassle.

12 Minutes‘ story, presented cleanly, is a gripping piece of work.

12 Minutes is something unique and experimental, and like any experiment, there are going to be some hiccups. As it turns out, this game’s main fault was that it, by its nature, rips time from its players. But between those moments, it tells a brilliant story, one in which you can go back to any chapter and decide to do a rewrite. 12 Minutes certainly won’t be for everyone, but if you’re looking for a change of pace, the game comes recommended highly.

If you’re looking for something point-and-click and cinematic, Telltale’s The Walking Dead is unparalleled.

My run through 12 Minutes took roughly five and a half hours, but it could easily take upwards of seven if you’re trying to get every achievement in the game.

Yes. 12 Minutes is a game unlike many out there, and while it may not always respect your time, you’ll at least be entertained by stellar performances from recognizable actors.