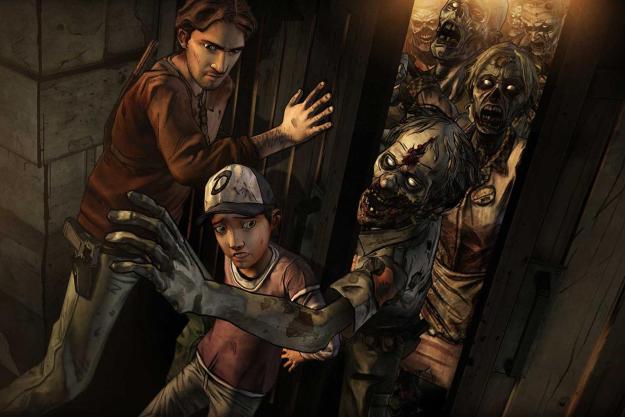 “The Walking Dead: Season 2 is a triumph of interactive storytelling, from beginning to end.”

Editor’s note: It goes without saying that spoilers lie ahead if you’ve never played an episode of The Walking Dead, being that this is a review of the second season. You can, however, read with confidence knowing that none of the events of Season 2 are spoiled here beyond very general descriptions. As always, it’s best to play first, then read and respond to criticism like this second. You already know that Season 2 delivers the same level of star-caliber writing, so let’s make this a conversation.

You’re going to watch your friends die. In some cases, you’ll be the one that kills them.

That is both the solemn promise and the inescapable truth of investing in the fictional zombie world created by comic book writer Robert Kirkman. Whether you’re reading his words, watching the AMC TV show, or playing Telltale Games’ wonderful episodic series, you check your humanity at the door when you immerse yourself in The Walking Dead. The series is brilliant because it’s never been about zombies; it’s really a story of humans trying to survive under terrible circumstances.

Always remember, WWCD: What Would Clem Do?

There’s no room for conventional morality in this space, and Telltale fully embraces that notion in The Walking Dead: Season 2. The first season evolved over time; while the storytelling was always strong, early chapters are marked by relatively clear-cut decisions to make. There’s always going to be some deviation, but when it’s a choice between saving the shy computer geek or the salty journalist who’s handy with a gun, which would you rather have at your side in a zombie apocalypse? You do what you must to survive.

That’s not the case in the second season. With Lee Everett dead and Clementine out on her own, Telltale explores some very dark places. Clem – through you, the player – makes her own choices this time around, but it’s always in the context of a brutally unforgiving world. Sometimes you’ll go with a course of action at a critical moment and then watch your expectations shatter as something you never planned for occurs. Other times you’ll make a seemingly innocuous choice that, in hindsight, changes absolutely everything. It’s like this from moment one.

After a tense opening sequence that establishes the time and place in relation to the events of the first season, the story settles into one of its rare quiet moments. As with most things in this universe, however, the respite turns out to be an illusion. There is no good to be found, no happiness. Everyone and everything is desperate, and Telltale delivers a harsh reminder of that in episode one by forcing players into committing an act that shatters deeply ingrained social taboos.

It’s a powerful statement to make, and it very effectively sets the tone for Season 2‘s dark doings. The memory of Lee looms large for Clem, but there’s no one to hold her hand anymore. She’s got to rely on herself. If the first season was a father-daughter-like journey in which two strangers found shared love and safety in the eye of a proverbial storm, season two is all about growth. Evolving into the sort of person that can survive in this hellscape. Clem’s got the lessons Lee left her with, and now she’s got to live by them.

Sometimes that means stitching up a wound, one swipe of the needle at a time, screaming and crying the whole way through. And sometimes it means simply watching, helpless, as the light fades out of a drowning friend and protector’s eyes. There’s no “winning” in a game like this, a story like this. Lee’s lessons turned Clem into a more capable survivor, but they can only keep death at bay. Free will offers no protection from a world in which morality is measured on an individual scale.

The Walking Dead: Season 2 is a truly masterful fusion of plot and play.

If Season 1 taught us that you can’t save everyone, Season 2 reminds us that, at the end of the day, you’ve got to make sure you save yourself.

As a player, the most valuable thing you can do to better immerse yourself in the story is figure out what Clem’s mindset is in a post-Lee world. Who is she to you? What do you want her journey to look like? Is she a solitary survivor or does she still have the capacity to trust people? The story is scripted yet pliable based on how you interact with it. You can’t think strategically about Clem’s survival, you can only act in the moment. Your self-perception may even change and evolve as new experiences soak in. That’s kind of the whole point. Figuring out what makes your Clem tick is a valuable thought exercise that better equips you to make snap decisions. Always remember, WWCD: What Would Clem Do?

It usually works out. Telltale’s writers are getting better at building a branching story that seamlessly spins off in multiple directions. There’s an occasionally clunky line of dialogue or character performance that doesn’t quite sync up with whatever’s happening on the screen, but these moments are rarer than they’ve been before. The illusion is close to perfect, and it gets better and better as the season wears on.

The closing episode’s final, terrible choice brings it all together. Again and again throughout the season, Clem’s journey is constantly influenced by forces beyond her control. You can have a meaningful impact on characters and situations, but there’s always a puppetmaster looming just out of sight, pulling the strings. It’s always OK, because the emotional journey is the one that really matters, but you see easily enough which twists are scripted in hindsight.

That ending, though. In a sense, all of the choices you make over the course of the second season’s five episodes come to a head in the closing 20 minutes of the finale. It’s left completely in the player’s hands, and the choice that’s made has a very real, very noticeable influence on the way everything turns out. There’s no subtlety to Season 2‘s climax and denouement. It’s designed and realized as a reflection of Clem’s journey. WWCD? That’s on you.

The Walking Dead: Season 2 is a triumph of interactive storytelling. Video games simply have not seen its equal. The scope of what’s been accomplished, not just over this season but in the story as a whole, isn’t fully clear until the credits roll on the finale, but the realization leaves you breathless. It’s a truly masterful fusion of plot and play. The Walking Dead: Season 2 may kill your friends, may leave you alone, wounded and helpless, in an unforgiving world, but it never loses sight of the fact that Clem’s destiny, Clem’s humanity, is always in the player’s hands. As it should be.

Topics
Wordle today: Answer and hints for January 27 (#587)
The best upcoming PS5 games: 2023 and beyond
Best Gaming PC Deals: Save on RTX 3070, 3080, 3090 PCs
Call of Duty: Warzone 2.0 Season 2 will finally fix its looting system
How to connect an Xbox controller to a PC
GTA 5 cheat codes and secrets for PS4, PS5, Xbox, and PC
WWE 2K23: release date, editions, pre-order, and more
Despite divisive dialogue, Forspoken gets a lot right about open-world games
The best RPGs for the Nintendo Switch
How to link your Fire Emblem Engage and Fire Emblem Heroes account
Xbox and Bethesda’s Developer_Direct: how to watch and what to expect
Goldeneye 007 comes to Game Pass and Nintendo Switch later this week
The best iPhone games in 2023: 31 games you need to play right now