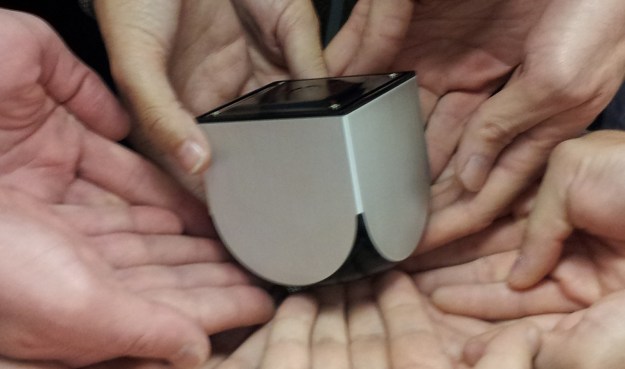 Game developers know that Ouya, the Google Android video game console, is real. The Ouya company began shipping out developer consoles, each one a custom made unit, in December just like it promised to do at the end of its landmark Kickstarter campaign in the summer of 2012. Ouya raised $8.5 million through Kickstarter. That money wasn’t all from developers looking to help make a new type of living room gaming machine a reality. Plenty of that money came from curious consumers that put down $99 up front for their own Ouya when the machine finally became available. The targeted release date was April 2013, and Ouya still plans to deliver consoles to that pre-order through Ouya.tv. June 2013 is when the machine will start showing up on store shelves, with a number of retailers lined up to carry the device.

“The presale is going to be on dot com [sic] and we plan on rolling out in physical locations. March is the unveiling, when Kickstarter backers get their units and Ouya will be live for all our supporters,” Ouya CEO Julie Uhrman told The Wall Street Journal, “In April we will be delivering units from people purchasing, and June will be the official launch.”

Following the official launch, Ouya will be available at brick and mortar stores like GameStop and Best Buy. Amazon.com is giving Ouya a significant push and is itself already accepting pre-orders for the console.

Uhrman also broke down precisely how many Ouya machines will be shipped out across the March to April period. “I think it’s fair to say to get established players in the retail space excited about pre-selling Ouya speaks to the excitement in the marketplace. We’ve had more than 63,000 backers, and more than 68,000 consoles on order [including Ouya.tv preorders] today.”

What Uhrman did not confirm was how many games would be available for Ouya when it ships in March. She pointed to community websites for the Ouya developer community that list 200 titles. When asked about exclusives for the console, Uhrman pointed to Square-Enix’s port of Final Fantasy III. According to Uhrman, it won’t be a straight port of the Android phone/tablet version of the game. “Final Fantasy III has a lot of exclusive features—it’s the only version that’s made it to the TV. It’s a unique version that be available only on Ouya.”