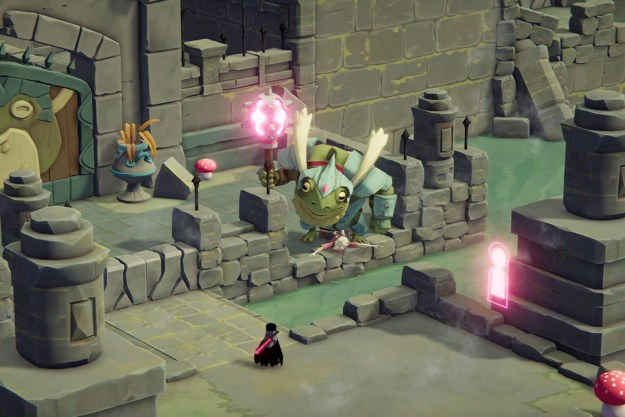 Dark, laced with wit, and adrenaline-pumping — Death’s Door is the Metroidvania that’s finally hooked me.

Metroidvanias have long eluded me as a genre. I’ve never been able to get into the backtracking aspect of them; their maps never intrigued me enough, and their stories always lost me. That all changed upon taking control of Death’s Door‘s tiny crow. Where other large, sprawling maps had disinterested me, this one had my full attention. Where other stories lost me, I was fully engrossed here.

Death’s Door presents players with an endlessly interlocking fantastical world filled with secrets, exhilarating boss fights, and a grim tale that managed to get more than a few laughs out of me. In between all of this is a simple yet thrilling combat system that once again proves that the right developer can do a lot with some simple tools.

At its base, Death’s Door isn’t complicated. It’s not an emotional tour-de-force; it’s not a blockbuster title with massive hype behind it. But it is a rarity, an indie title that surpasses its AAA counterparts in almost every way.

The premise of Death’s Door is a macabre one. You fill the … talons, I suppose, of a reaper, who isn’t a grim skeleton but a feathered crow. In the game’s world, death is a bureaucracy, and if you can’t finish your job, you’re out of luck. The reaper is on a mission to recover a stolen soul, sending them on a goose chase across a meaninglessly hopeless world to reap even more souls just to get to yours.

Like I said, it’s not exactly sunshine and lollipops.

But through its grim haze, light shines through Death’s Door. Even with all the monster-slaying, leaving blood and corpses in your wake in a race to finish the job, the game gives players endless reasons to smile.

Every character in Death’s Door has some kind of charm about them, from bosses to friendly NPCs. While its underlying story is undoubtedly dark, every character has a warmth to them, even if they are tragic themselves. Take my favorite character in the game, Pothead, for example. His head was transformed into a pot through the magic of the Witch of Urns, hence the name. But if you ask him, he doesn’t see it as a detriment. Instead, he uses his pot head to store soup that he gives to passers-by.

Regardless of what I was doing, whether it was battling through enemies or chatting with NPCs, Death’s Door always left a smile on my face.

Most characters have this kind of depth, even the NPCs that don’t seem to matter all that much. They all have their own lives, their own interests, and their own passions. Regardless of what I was doing, whether it was battling through enemies or chatting with NPCs, Death’s Door always left a smile on my face.

While Death’s Door‘s funniest moments come from talking to NPCs, its most exhilarating moments are found in combat and exploration. Neither of these features is overly complicated. In fact, they’re both extremely simple. Once you explore the game’s first area and beat its first boss, you’ve experienced pretty much what you can expect through the rest of the game.

However, it’s the small tweaks in Death’s Door that make everything more meaningful. Enemies are largely the same throughout the game, but one or two new baddies are present in each different area. Likewise, exploration is pretty much the same everywhere until you unlock the game’s four power-ups, which can be used outside of combat to reveal new areas. Death’s Door starts with basic forms of these ideas and slowly builds upon them, incorporating every facet of its gameplay into one another.

Death’s Door starts with basic forms of these ideas and slowly builds upon them, incorporating every facet of its gameplay into one another.

Of course, exploration isn’t always positive. Every death naturally sets you back, and some of the game’s shortcuts are a not-so-fair distance apart. I simply ran through some areas that I found too difficult, trying to reach the next ladder I could let down or path I could reveal.

The more I played Death’s Door, the more its design choices, especially the structure of its world, reminded me of entries in the Zelda franchise. While Death’s Door encourages more backtracking, it shares some DNA with the earliest Legend of Zelda games. Players slowly unlock new power-ups and access new parts of the map from areas they’ve already been to. Even the game’s top-down perspective is reminiscent of Nintendo’s classic franchise. The game’s dark world is even offset by bright characters, a constant in most Legend of Zelda titles. Death’s Door has some clear influences, but it uses them to create something wholly original.

Death’s Door‘s worldbuilding is at its best in the approach to a boss fight. Each boss is given context first through the area you progress through to get them there. Maybe you talk to an NPC who says the boss killed their wife, or in the case of the Urn Witch, you travel through a mansion that was clearly at some point a happy family home.

The approach to each boss follows the same structure: Explore an area, get a new power, and then take on a boss. While this pattern repeats itself three times, eventually becoming predictable, the context for each keeps it fresh. Functionally, you’re doing the same thing each time you’re building up to a boss fight. But each experience feels different because of the scenery, the enemies, and the boss’ own interjections while you’re exploring.

The game’s boss battles are some of the most exciting I’ve fought through, thanks to its emphasis on evolution. Like the rest of the game, bosses build upon themselves with different phases, becoming more challenging as they’re damaged. You also don’t know exactly how much damage you’ve done thanks to Death’s Door thoughtfully leaving health bars out of the equation. Instead, enemies become damaged, and their skin cracks as you wail on them.

I haven’t popped off after beating many bosses before. Sure, maybe there’s a fist pump here or there, but actually cheering after I win? Before facing the Urn Witch in Death’s Door, the last time that happened was against Ornstein & Smough in Dark Souls.

Of course, normal enemies aren’t nearly as engaging, providing the same experience as punching bags when you get used to the game’s combat. Even the game’s mini-bosses don’t provide much of a challenge, especially when you face the same one multiple times. Enemies have simple attack patterns, and once you learn to bob and weave between them, taking an enemy down is less of an art and more of a science.

The game’s boss battles are some of the most exciting I’ve fought through, thanks to its emphasis on evolution.

That being said, Death’s Door lets players approach combat in a wonderfully open way. The game has multiple weapons, each with its own unique moveset and bonuses. The game’s default sword deals solid damage, but you can swap it out for a pair of knives or a massive hammer. Simply changing your weapon even affects how much you can use your abilities since you have four charges to use that can only be refilled by hitting enemies. Once again, no single part of Death’s Door is isolated; they all intertwine.

With a world that practically begs you to explore its every nook and cranny and a cast of characters that will leave you grinning from the story’s beginning to its end, Death’s Door is one of those rare games where I struggled to find any faults. It’s engaging from beginning to end (a journey that took me around 10 hours) and leaves players with even more content to explore after the story wraps up. Death’s Door is beyond exceptional and has solidified itself on my games-of-the-year list.

Unless you want to wait for Metroid Dread, there probably isn’t a better Metroidvania out there right now.

Death’s Door takes between 10 to 14 hours to complete, depending on how much of the game’s extra content you want to complete. It also has a sizable amount of post-game content that can add an extra three or four hours to the total playtime.

Yes. Death’s Door is one of the best games released this year and will certainly be a game-of-the-year contender by the time 2021 wraps up.

Topics
The best upcoming Xbox Series X games: 2023 and beyond
The best upcoming PS5 games: 2023 and beyond
The best Nintendo Switch games for 2023
Starfield: release date, trailers, gameplay, and more
Xbox just surprise announced and released a stylish new Game Pass title
The Elder Scrolls Online’s 2023 updates bring players back to Morrowind
How to cheat in Words With Friends
Shoulders of Giants brings mascot-era nostalgia to the roguelite genre
The best PSVR games for 2023
Like a Dragon: Ishin’s Trooper Cards are full of cameos, including Rahul Kohli
How to romance characters in Fire Emblem Engage
How to eliminate enemies with no ranged weapons in Fortnite
Fire Emblem Engage gift guide: every character’s favorite gifts