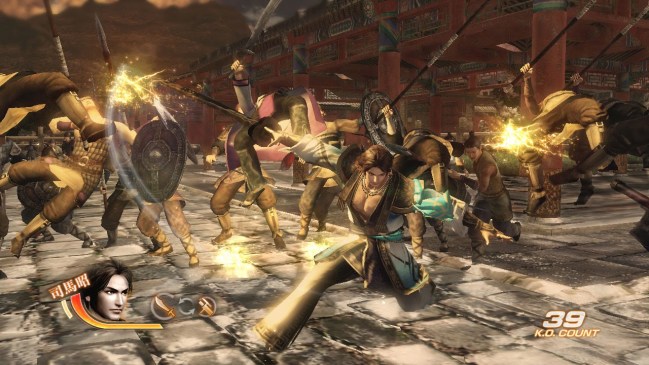 To many, the Dynasty Warriors series is something of a guilty pleasure. It does not offer particularly deep gameplay or story lines, but there is just something satisfying about wading through hundreds of enemies at a time (literally), and dominating your foe. The model has seen success in both Japan and America, so much so that the seventh title in the franchise (not counting the various spin-offs and titles with identical mechanics but different characters) returns this Spring.

If you have never played the Dynasty Warriors series, don’t worry, there isn’t much in terms of catching up that needs to be done. It is a traditional hack and slash game, with 54 playable characters, most of which carry their own unique weapons. The story is based on the historical fiction of the Romance of the Three Kingdoms, a tale that could be considered similar to several Western classics, including Homer’s The Iliad and The Odyssey, although with slightly more factual roots and no supernatural side to the telling.

The Three Kingdoms is an epic that spans decades and details (then romanticizes) a true period of history when China was in a state of civil war, and three kingdoms rose. Heroes were made on all three sides, and the legends have been retold for nearly two thousand years. Of course, none of that really matters in Dynasty Warriors. You choose your character, and then kill everyone not on your side. Add a friend for online or split screen co-op and watch the hours disappear.

There are some new bells and whistles to the upcoming seventh title, but at its heart, the series remains the same. Check out the new trailer below, and look for Dynasty Warriors 7 on Xbox 360 and PS3 on March 22.

How to use photo mode in Gran Turismo 7

The best zombie games for Xbox One

8 spooky Halloween games for people who don’t like horror

The best Batman games of all time, ranked

How to convert your window blinds into smart blinds

AMD FSR vs. Nvidia DLSS: Which upscaler is best?

How to install Windows 11 in a virtual machine