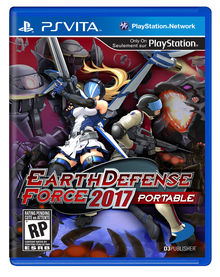 Before we start weighing what’s good and what’s not about D3Publisher’s PlayStation Vita port, Earth Defense Force 2017 Portable, let’s remember the most important thing: this is a portable version of EDF 2017. Now, thanks to the magic of technology, you can pick up your Vita anytime, in any location, and fight to save Earth from invading giant alien insect and robot forces. Judging the game purely on this fact alone, it is an automatic winner.

Make no mistake: the fact that EDF 2017 is now playable on a portable screen doesn’t actually elevate the quality of the experience. This launch window Xbox 360-exclusive from 2007 hasn’t aged well at all. The graphics look like they could have been handled by a last-gen platform, the controls are simplified to the point of confusion, and anything that didn’t work well six years ago is still just as non-functional now as it always was. And yet, that’s sort of where EDF 2017‘s charm lies. As imperfect a game as it may be, it still manages to deliver in spades on its simple concept of “lay waste to entire cities as you shoot everything at giant bugs and robots.”

Let’s start with what’s new for the PS Vita release. Completing the game unlocks Pale Wing for use, a jetpack-equipped soldier that plays very differently from the landlocked protagonist in the vanilla game. There are some new weapons and levels, though in all honesty, with it being multiple years since EDF 2017 was last played on a Xbox 360, most will be hard-pressed to identify them. That said, the new bits amount to “more game,” and for an arcade-y shooter such as this one, more content is only a good thing.

The Vita release also adds some new multiplayer options, complementing local co-op with a new online mode that supports up to four players. In the time I spent reviewing EDF 2017 Portable, I was never able to find a Versus room to play in, but the co-op play is great. You can tackle any of the games levels on any difficulty with up to four players in the lobby. Restrictions can be set on weapon levels and health levels, and an assortment of similar filters can be applied when searching for a lobby to join. I ran into minimal connection issues when stepping into co-op matches. More importantly, EDF 2017 Portable really shines in co-op. Between the ability to revive teammates and the insanity of having four people firing massively destructive weapons in all directions, the carnage is a glory to behold.

Unfortunately, this is where the new additions stop. The port brings in some welcome bonuses, but none of the flaws of the 2007 game have been addressed here. Vehicles are the biggest offenders; while 2010’s EDF 2017 follow-up, Insect Armageddon, offered a revised approach to piloting machines of war — they became fun to play with! — no such tweaks were made to this Vita release. In truth, the controls weren’t touched at all in any meaningful way. Even when you’re just moving your standard footsoldier around the battlefield, there’s still the baffling absence of a reload button to cope with.

For some, elements such as this only add to EDF‘s charm. That’s the audience this game is aiming to capture. If you didn’t like EDF 2017 before then you’re probably not going to find much in Portable to enjoy. It’s the same game, for better and for worse. The biggest issue of all is, unfortunately, the price. Given the minimal number of enhancements made for this portable port, it’s something of a shock that Sony is asking $39.99 for an item that you could pay $15 to play on your Xbox 360. Yes, this is the first time EDF 2017 is available on another platform, and yes having the option of online co-op is a great thing, but this is one of those rare cases where it’s difficult to recommend the game to anyone at the price that’s been set for it.

All that said, it’s hard to deny the raw fact that EDF 2017 Portable is still just as stupidly fun as it’s always been, and that you can now play it on the go. Speaking as a longtime fan of the game and the series, I can say that price wouldn’t be a factor here for me. Series newcomers might want to sample the 360 game first before taking the plunge, but if you love EDF and you’ve been jonesing for some alien bug-squashing on the go, this PSN-exclusive Vita release will most definitely scratch that itch.

(This game was reviewed on the PS Vita using a copy provided by the publisher.)