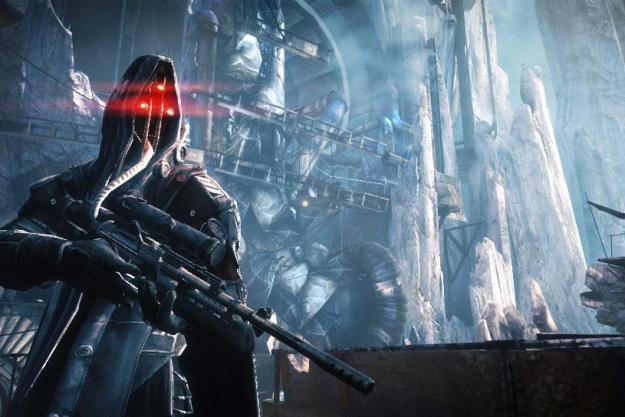 “Killzone: Mercenary may be the best FPS on the Vita, but that doesn’t make it a great game.”

The Vita’s library of just over 240 games is quickly approaching a dangerous level. When you add in the plethora of downloadable versions of older games, there is plenty to choose from, but there are still only a handful of games that really use the Vita’s functionality to its fullest. Killzone: Mercenary does that, and offers a competent and impressive FPS as a result, complete with all the tropes of the genre.

It’s just a shame that it feels likes half of a really good game.

Welcome to the Killzone

The story of Killzone: Mercenary is a complex allegory describing humanity’s natural conflict between order and chaos, and how love can be the most powerful weapon.

As the name suggests, you play a mercenary. Set during the Vektan/ISA and Helghast war that played out in the first three Killzone games (four if you count the dungeon-crawler Killzone: Liberation – but let’s be honest, no one does), you play silent mercenary Arran Danner, whose sunglasses and baseball cap mask the heart of a poet.

In pop culture, a mercenary is someone that fights for money, who is willing to kill almost indiscriminately if the price is right. It offers up all manner of fascinating and original storytelling options. But despite the mercenary title, the game plays out like any military FPS. You could replace the subtitle with “special forces,” or any other soldier-based designation, and change only a handful of lines of dialogue to correct the continuity. Although he is barely characterized, protagonist Arran Danner is a “good mercenary,” and his missions generally consist of standard “good guy” military objectives like saving hostages or destroying an evil weapon. Even the missions you take on for the Helghast – because you’re a mercenary! – are well within the standard war-based shooter mold.

The story is entertaining in the most superficial way, and the few twists and turns the plot throws at you are enough to keep you lightly interested, even if they are hackneyed and generic, and generally just an excuse to blow up different things than before. There’s a betrayal you’ll see coming from a mile away, an orphan kid you sort of bond with, and lots of military technology that needs to be destroyed for the greater good. It is nothing you haven’t seen before. It’s nothing you haven’t seen a thousand times before.

Killzone: Mercenary consists of nine missions, each with a linear path and a clear set of objectives. Success earns you money that you can then spend on new weapons and equipment. The game plays out like an arcade shooter with a point value attributed to your actions.

Once you complete a mission, you can go back and replay it to pursue newly unlocked objectives. These tend to be in-game goals that supplement the action, and they fall under one of three categories: Precision, Covert, and Demolition. The three modes are inherently different. It’s difficult to stick to a covert style that includes things like avoiding alarms while completing the demolition objectives that tend to be “louder.” You generally have to stick to one style. The idea is that you’ll want to play the same mission repeatedly, using the equipment that complements the playstyle you choose.

Despite the mercenary title, the game plays out like any military FPS.

Killzone: Mercenary uses the Vita’s controls in smart ways without forcing them into use by just mapping things to the system’s unique controls. That isn’t the case here. Both the rear touchpad and the touchscreen are integrated well. Thankfully the back touchpad, which is used to initiate sprint, can be turned off and you can use a face button instead. Otherwise you’d be constantly sprinting into walls as your fingers graze the back. It’s nice to have the option though.

The touchscreen incorporates the two buttons missing from a standard controller, and offers a unique gameplay mechanic. By touching the corresponding weapon icon, you can switch weapons, and more importantly, activate your special weapon. These range from personal shields to air strokes to a remote controlled drone, but none highlight the Vita’s potential more than “The porcupine.”

Once activated, enemies on screen will all have a target icon on them. If it is red, you can touch that icon on the screen and launch a missile. If you time it right, you can launch several missiles at once by physically touching the enemy on screen. It decimates enemies, and is unique to touchscreen controls.

The rest of the gameplay is familiar to anyone that plays FPS games – with a few minor hiccups, like the cover system that occasionally won’t let you fire and the enemy AI that frequently attack by charging directly at you, but these are minor and infrequent issues.

Killzone: Mercenary offers a genuine first-person shooter experience on the Vita. It isn’t a good FPS “by Vita standards,” it’s just a good FPS that happens to be on Vita. Or at least, it’s part of one.

Killzone: Mercenary’s biggest problem is a shocking lack of content. The graphics look good (late PS2 or early PS3 quality), and the art design makes every level feel sufficiently different. The missions offer typical FPS objectives, but they play out on levels that are often multi-tiered, which makes the combat consistently feel varied since you won’t always know where enemies will come from. There just needs to be more.

This isn’t a “leave them wanting more” situation. You can beat the entire game in around four hours – less if you skip any stealth play. If you know where you are going, you can probably beat it in under three. After that your only option is to repeat the same mission again and again.

Killzone Mercenary’s multiplayer consists of three modes. Two of them are common to the point that most people would be surprised if they weren’t included: Mercenary Warfare, your standard eight-person free-for-all, and Guerilla Warfare, a 4v4 version of team deathmatch. The third mode, Warzone, is really the highlight.

Warzone offers five phases for two teams of four. The first and last phases are your standard team deathmatch, but the second, third, and fourth are objective-based: In phase two you interrogate downed enemies, in the third phase you collect cards off of downed foes, and in the fourth you collect Vanguard capsules containing special weapons. The variety makes the games consistently feel fresh, and the changing action requires flexible strategy.

Due to the review time frame, my time online was limited. My connection was fine and I didn’t suffer any dropped games, but my experience was different from what users on launch day and after may experience. Regardless, even though the modes played well, the scarcity of options will likely curtail the possibility of a strong online community.

Killzone: Mercenary feels like half of a really promising game, and if it were twice as long, it would be one of the best games for the Vita. You could forgive this in a discounted downloadable title, but Killzone: Mercenary is a full priced $40. It’s just not enough for the money, even with a multiplayer mode.

That lack of content permeates the entire game. The story is good, but shallow. The levels are engaging but over quickly. Even unlocking weapons is overly simple, and you can have anything you want after just a few missions. It’s just a shame that it’s over before it began.