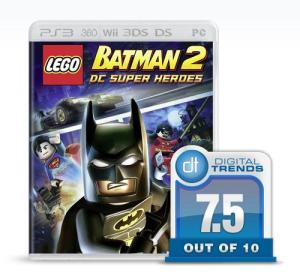 There is a very specific formula to Traveller’s Tales’ Lego games that has served them well for years. It involves taking a beloved license, distilling the story down to its essential parts, then throwing in some humor. The gameplay is generally simple, and smashing stuff can become a full time job as you collect studs throughout the world, but it is charming in its own way.

Lego Batman 2: DC Super Heroes follows the same formula that the other Lego titles feature, but throws in an open world to explore along with some of the best-known characters that the DC universe has to offer. It is still very much a Lego game, and that is a good and bad thing. One more significant change that longtime fans will notice is the inclusion of voice acting. This is a first for the series, and it may not sit well with the more ardent fans of the games, but the humor is well presented through the cast. It is more an issue with the change than the quality of what is there. The humor is good, but it is different than before.

The game, however, has bigger issues holding it back. But they are tempered by the audience the game is geared towards. This game is made for kids. You can say that about all the TT games, but Lego Batman 2 lacks a lot of the depth that the other games have. That is surprising and perhaps even a touch ironic considering that Lego Batman 2 features an open world of Gotham City, but the city is deceptively vacant. There are multiple enemies to fight and plenty of red and gold blocks to collect, but beyond that there is very little substance. The game simply doesn’t deliver on its potential, but it does offer a lot to do and see.

When Joker and Lex Luthor team up to help Superman’s arch-enemy get elected as President, it pits them directly against Batman and Robin, eventually Superman, and (at the very end) the Justice League.

The game’s narrative unfolds over 15 chapters, but that makes up only about a quarter of the game — the remainder is left to replaying levels with different characters, exploring Gotham, and defeating the more than 20 DC villains scattered around the city.

Although a great deal has been made of the inclusion of many of the Justice Leaguers that you can play, the game is mostly spent focusing on Batman and Robin, then for some of the later levels Superman replaces Robin. It isn’t until the very end that you have access to Cyborg, Green Lantern, Wonder Woman, and Flash. Once you complete the game you can then access many other Leaguers and villains to replay and explore.

If you are hoping for a narrative driven story, Batman 2 is a bit weak on that end. The levels are all well-designed as a platformer, but they quickly devolve into smashing things and moving in a straight line. You will swap outfits as Batman and Robin, but this is generally to solve a very specific obstacle or puzzle. There is only one way through, so it is just a matter of figuring it out. It gets old quickly.

Of course, breaking things like it’s your job is all part of the TT Games formula. Unfortunately, there is just something missing here. The charm and fun are absent — or at least muted. That is especially obvious when you begin to explore the mean streets of Gotham.

The Lego-fied Gotham City looks great. It is gaudy and bright, and totally over-the-top in a fitting way. Giant Lego statues hold up bridges and buildings; Arkham Asylum is just a car ride away; and even places like Acme Chemicals make an appearance. But for all the space at your disposal, there really isn’t much there.

There are plenty of gold and red bricks, most of which will require you to overcome certain obstacles or use specific characters to collect them. This quickly devolves into a series of hunting for the right suit to unlock the brick. There are also several mini-bosses littered throughout Gotham, but once you unlock them, it is simply a matter of punch, punch, punch, until you have the option to buy that character for use later. Rinse and repeat.

Flying around Gotham as Superman with the original John Williams score blaring or ripping through the streets as the motion sickness-inducing Flash is the best way to explore, but there just isn’t that much to see. There are plenty of random citizens and enemies that give the city a lively feel at first; however, it doesn’t last long. You have a few side things to do, but none that will really get you excited after you complete the campaign.

The rest of the Justice League provides some much needed variety once you unlock them to play, but there is a lot of repetition among the powers. Longtime DC fans will appreciate being able to play as most of the characters they have been reading about for years though. There just needed to be a bit more to it.

There is a co-op element, which is understandable since you are always sharing the screen with someone, but it is only split screen and not online. That omission is both a shame and a missed opportunity.

For a game built around a massive world filled with infinite choices, there really isn’t much to it. The familiar Lego humor is still present, but there is less of it sprinkled through what is an otherwise unremarkable campaign.

Lego Batman 2 is a true Lego game, and it should appeal to the fans of the series and style, as well as younger players, but it is not as compelling as other games under the TT banner, and will not have quite the ability to win over doubters as some of the other games have. There is definitely an appeal to playing as various Justice Leaguers though, but even that is a bit lackluster.

The Lego games have remained mostly static for years now, with just a few tweaks and changes. That is usually fine, but the series could use a shot in the arm that Batman 2 doesn’t provide. Lego Batman 2: DC Super Heroes is an adequate game, but not an exceptional one. In short, it may be the Lego game we deserve, but not the one we need.

Destiny could be expanding into comics, movies, and TV shows soon

Super Mario Maker 2: How to unlock all Mii Maker outfits