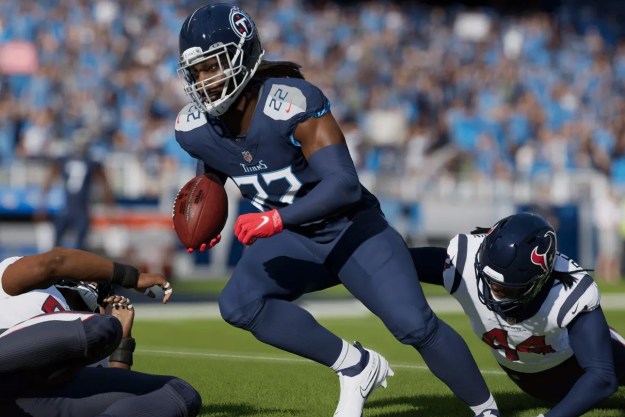 “Madden NFL 23 is an improved game when compared to Madden NFL 22, but that isn't enough to make it good.”

EA’s Madden football series has been in a freefall of quality for years. Removed features, gameplay that felt like it was based on rigid animations more than realistic physics and skill, and a plethora of game-breaking bugs soured each entry in this best-selling sports game series. They all played like Justin Fields in that 2021 Browns game. The pitch for Madden NFL 23 from EA was that it would honor John Madden’s legacy by fixing these problems. In reality, the results are mixed as new additions are helpful but still overshadowed by some significant issues.

Madden NFL 23 is a clear step up over Madden NFL 22 in many ways, with some key gameplay and animation improvements making the game feel weightier, more precise, and less stilted. That said, other issues that have plagued the series for years are still here. The simulation aspects of Madden NFL 23 aren’t as deep as they should be. Some bugs are gone, but other terrible ones popped up in their place. Core modes feel ignored, as EA can’t seem to balance both gameplay fixes and feature improvements during its annual development cycle. While EA might have slowed the Madden series’ freefall slightly with some pleasing gameplay changes, Madden NFL 23 is not the franchise’s turnaround season (although I hope it is for Justin Fields).

There isn’t one major overhaul to the core of how Madden NFL 23 plays, but a bunch of smaller improvements make the game feel a bit better than Madden NFL 22 and garner catchy monikers under the new FeildSENSE brand. To start, animations flow more smoothly as there are many new animations for pass rush, tackles, blocks, and turnovers. Lineman and linebackers feel more involved and threatening in Madden NFL 23 because they aren’t locked into play-determining animations.

“Gameplay improvements are the real star of the show in Madden NFL 23.”

Other FieldSENSE mechanics include ball carriers that make 360-degree cuts, and Cornerbacks and wide receivers have new moves to counter each other. Those are minor additions compared to the real star of the show: Skill-Based Passing. Passing is reworked in Madden NFL 23 so players can aim and time the power of their throws as a quarterback more acutely. While it isn’t tutorialized the best in-game, this new system gives the player a lot more say on the ball’s placement and makes the passing game feel like more than a quick-time event.

Overall, these minor gameplay improvements are the real star of the show in Madden NFL 23, and I’m glad that EA finally took the time to fix some issues that plagued the series for years. This does come with a significant caveat, though: I’m reviewing the game on Xbox Series X. Be warned that if you don’t have a current-gen system and play on Xbox One or PS4, you won’t see any of these gameplay improvements even though EA still advertises FieldSense in the last-gen version of the game.

It’s also hard to ignore the fact that these are all still just gameplay tweaks that EA gave a gimmicky name so they’d sound fancier than they are. Good core gameplay is pivotal for any sports game, but it’s also just one part of a much bigger package in any year. Unfortunately for Madden NFL 23, FieldSENSE is really all it has going for it, and it is somewhat incriminating that this is all they could do between entries.

Franchise’s most considerable improvements come to free agency, as players now have motivations and tags that determine whether or not they’ll accept your offer. Sadly, this system seems to break a couple of seasons in as talented and highly-rated players leave their teams. Scouting also got a bit deeper with position-specific attributes, but this can all be largely ignored and simulated by casual players without much of an impact on the field. It’s nice that EA is no longer completely ignoring franchise mode, but there should be more here to build on its substantial overhaul in Madden NFL 22.

The lack of substantial improvements means the experience feels lesser than the sum of its parts.

Face of the Franchise reels back much of the mode’s narrative elements and adds the Cornerback position and weekly side activities for slight boosts in its place. Considering how miserable Madden NFL 22’s Face of the Franchise narrative was, it’s nice that Madden NFL 23 focuses more on gameplay as your fourth-year player tries to reach the Madden 99 club. Unfortunately, Cornerback isn’t the most exciting position to play for an entire season, and some frequent glitches prevent this mode from going down smoothly.

Meanwhile, Ultimate Team got a couple of tweaks to things like MUT Champions, but a menu glitch has rendered that mode near-unplayable during the review period, so I never really engaged with those elements. Aside from that, there is a special game honoring John Madden that players will experience upon booting up Madden NFL 23 for the first time. It’s a lovely tribute to the series’ namesake, with restored audio clips of Madden and a presentation that feels distinct from standard games. I do yearn for something narratively deeper, like a mode where players could experience moments from Madden’s career as a Coach, especially with the lack of story in Face of the Franchise. Then again, there’s only so much they could make in the seven months of development EA had following his death.

Don’t call it a comeback

Madden NFL 23 feels like a game made by developers most concerned with just making minor gameplay improvements to hopefully quell fan outrage and get gameplay in a good place before the NCAA spin-off arrives. While this works in some cases, glitches and the lack of substantial improvements means the experience feels lesser than the sum of its parts. The restraints of EA’s vision for the annual sports series are starting to show.

The more time I spend with Madden NFL 23, the more its issues continue to annoy me. The FieldSENSE improvements feel good in your first few quick matches. However, over time you’ll still notice that it’s a lacking NFL simulation with animations that seem to cancel out as soon as you get a touchdown, the lack of real offensive and defensive coordinators, a pre-game coin toss, or referees on the field as you play. Madden NFL 23 might be the best-playing Madden game in years, but that doesn’t mean it’s realistic. Players will also have to deal with a plethora of bugs. Despite Executive Producer Aaron McHardy detailing to Digital Trends how EA systematically fixed bugs found in previous games, plenty of issues are still present.

Some long-running glitches, like player and coach models getting weirdly morphed or players continuing to run after a play is over, are gone, but other bugs remain and pop up in their place. Lighting in stadiums flickers, and Madden NFL 23’s menus, in particular, seem to glitch out a lot. I’ve already mentioned Ultimate Team’s menu issues, but at one point, my Face of the Franchise menu turned completely invisible when I changed my difficulty settings. This made the mode nearly unplayable until it randomly fixed itself after I advanced a couple of weeks. I’ve also gotten stuck on loading screens, and a quick look online exposes many other issues. Releasing a game with this many bugs is unacceptable, even if Madden NFL 23 has slightly fewer bugs than Madden NFL 22.

If anything, that bug situation is emblematic of the fact that the Madden series dug itself into a hole that will take more than a year to get out of. While Madden NFL 23 technically stopped the series’ decline in quality, it hasn’t started the incline. I want to avoid cliches, like saying that Madden NFL 23 is “a step in the right direction,” but EA can improve this series if it iterates faster, more substantially, and with fewer bugs. It’s clear that EA doesn’t intend to ever take a year off this series, but Madden NFL 23 shows that might be what the series needs to if it wants to reclaim all it has lost and surpass expectations.

Madden NFL 23 makes a lot of good gameplay improvements targeted at its hardcore players. Sadly, that approach also exacerbated some of the series’ other lingering problems. If you really need a Madden game for your next-gen system, this is the best option. That doesn’t mean it’s a good one, though. Casual players might enjoy the few improvements as they play a match or two online, but the glitches, unsubstantive mode improvements, and other problems with its situation make Madden NFL 23 more frustrating than fun in the long term for hardcore players.

Currently, EA has the exclusive rights to simulation NFL games, so there isn’t. If you want a Madden game with fewer issues, you’ll probably have to go back to the Xbox 360 era. Still, the current state of the Madden series does have me interested to see what the non-simulation football game 2K has in store is like.

Madden NFL 23 doesn’t have an endpoint, so playtime will vary from player to player. I put over 20 hours into the game for this review.

No. Madden NFL 23 is still not a good football simulation game. If you need to purchase a Madden game for your next-gen system, make it this one, but in all honesty, you’re best off avoiding the series until EA builds more on the foundations it started to lay here.