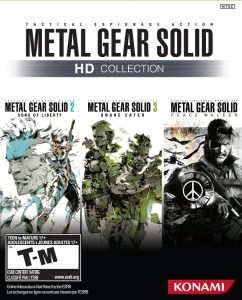 Notably absent, however, is the original Metal Gear Solid from the PSOne, which is a criminal shame. Konami has claimed that technical problems were to blame for the omission. They must have been serious problems, as the game’s absence downgrades the MGS HD Collection from being the ultimate collection to just being a very, very good one.

Upgrading a PSOne game for the current gen is likely an incredibly difficult (not to mention timely and costly) chore, but its absence is felt. Obviously, Metal Gear Solid 4 is also missing, and despite years of rumors to the contrary, it remains locked down as a PS3 exclusive (and still one of the best games on the system), and will likely remain as such for years to come. Still, there is plenty of content to enjoy.

Looking past that, this game is perfect for longtime fans. With the two exceptions mentioned above, everything is in there. The VR missions, MGS2 Alternate missions, the original NES games, three full length MGS titles, Hideo Kojima’s slightly pervy Easter Eggs, it is all there. It is ridiculous how much awesome weirdness is included in this package. There really is nothing quite like the MGS series.

The first PS2 MGS games, Metal Gear Solid 2: Sons of Liberty and Metal Gear Solid 3: Snake Eater have both received a fresh coat of HD paint and a 60 fps upgrade, as well as slightly upgraded audio to boot. The controls remain the same though, as do the menus and cut scenes, for good and bad. The series has come a long way over the years, and the game mechanics are one of the things that has changed most. MGS2 is slightly clunky compared to the later offerings, but it is still a great game, and the HD graphics are welcome.

MGS2 was originally released as a PS2 launch title in 2001, and 10 years in gaming makes a huge difference. The graphics do look good, though, and the game would fit right at home with some of the later PS2 games, or perhaps some of the current XBL/PSN downloadable games. But it is really just the details that suffer, as the movements and overall look are infinitely playable. The game was never made for 1080p and it shows, but doesn’t detract from the experience. Snake looks good, albeit a little cartoony by today’s standards, and Raiden still sucks, but now in HD.

Metal Gear Solid 3: Snake Eater fairs better, and the HD graphics are immediately noticeable. The original game came out towards the end of the PS2’s life, so the graphics were already fairly strong. The upgrade propels them to a level close to that of the early 360 and PS3 games. The controls were also majorly improved from MGS2 — not quite at the MGS4 level yet, but still solid. The infamously long cut scenes also return, and for some reason you still can’t pause them, unfortunately, but eh.

The original NES games are also accessible on this collection, and they look exactly as they did when they first came out. If you are into retro gaming, then both titles may help to justify the purchase. If not, they are still a good inclusion.

Of all the content included, the most anticipated has to be Metal Gear Solid: Peace Walker. Debuting as a PSP-exclusive, Peace Walker was the least played Metal Gear Solid game in the series. Now fans can give the game a go. The graphical updates make this game look great.

The original game featured several co-op options, and those are available via XBL or PSN. Of all the games, Peace Walker looks the best, and it alone will probably get fans to buy this collection. The controls work well with a physical controller and the gameplay feels the best of the bunch. It was already a good game, and now more people will get a chance to try it out. Plus you get two of the most influential games ever made along with it.

If you are already a fan of the series, there really is no reason not to go by this collection, unless you have played all three MGS games so many times that the prospect of doing so again hurts your brain. The 60 fps upgrade looks great, and while the oldest game in the bunch (not counting the NES games) still has a dated feel in the look and the controls, it is immediately playable and will just take a few minutes to get used to.

The audio is also top notch, and hearing “Snake? Snake?!? Snaaake!!!” in Dolby Digital brings back memories. If you haven’t played the series, the absence of Metal Gear Solid is going to make the detailed and — let’s be honest — sometimes convoluted story difficult to pick up on, but it isn’t anything you can’t manage to piece together.

If nothing else, in sheer terms of value, this game is a must have. You get three of the best games ever made, two retro classics, and it is all for $10 less than most games.

The best PSVR games for 2023
Shoulders of Giants brings mascot-era nostalgia to the roguelite genre
Xbox and Bethesda’s Developer_Direct: how to watch and what to expect
The best RPGs for the Nintendo Switch
Despite divisive dialogue, Forspoken gets a lot right about open-world games
How to link your Fire Emblem Engage and Fire Emblem Heroes account
Goldeneye 007 comes to Game Pass and Nintendo Switch later this week
The best iPhone games in 2023: 31 games you need to play right now
I can’t believe I’m recommending Forspoken on PS5 over PC
Redfall’s May 2 release date revealed during Developer_Direct
The best Fire Emblem games, ranked from best to worst
Xbox just surprise announced and released a stylish new Game Pass title
The Elder Scrolls Online’s 2023 updates bring players back to Morrowind