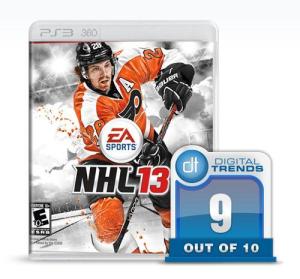 September is here, and along with it comes the 2012/2013 season for the National Hockey League. And as always EA Sports is there with its faithful annual simulation. The updated rosters are great, but every year the pressure is on EA’s dev team to offer fresh, new content to justify another full-priced game purchase. NHL 13 earns its title as the go-to pro hockey sim of year. That it’s also the only pro hockey sim of the year is, in this particular case, beside the point.

Lacing Up Your Skates

The fundamental different that elevates NHL 13 beyond any of EA Sports’ past hockey efforts can be summed up in three words: True Performance Skating. The game trumpets this fact the very first time you fire it up, with a brief tutorial video hosted by cover athlete Claude Giroux, introducing what amounts to a seismic shift in under-the-hood mechanics.

In short, True Performance Skating is an all-new skating engine that is built on physics. The bullet points will happily tell you all about the 1,000+ player animations and painstakingly rendered motion capture, but in gameplay terms it’s pretty simple: your players now move like they’re actually using a pair of steel blades to maneuver around the hockey rink.

The physics of ice skating are obviously a large part of what makes professional hockey so unique within the sports world. How quickly a given player can accelerate and then reach top speed helps separate the Wayne Gretzky types from the Rico Fata types of world (sorry, Rico!). You really feel the difference now between a mediocre player and a superstar.

It’s more than that though. Momentum is also now a huge factor in how you get around on the ice. If you race from one end of the rink to the other at top speed, you may beat the defenders to the crease, but you’ll almost definitely be going too fast to accurately knock anything more than a quick wrister at the net. There’s value in allowing yourself to coast along the ice now, since it reduces your speed and offers increased maneuverability.

You can both feel and, thanks to all of those new animations, see this unfold before your very eyes as you play NHL 13. As you click the left stick to pour a little more boost onto your top speed, you’ll actually see your skater push down the ice with even more vigor. Cut too hard during a turn and you’ll know it when the controller rumbles and your skates throw up shredded bits of ice. All of this together requires a dramatically changed approach as you play, and for someone who understands the physics of the sport, it’s most definitely for the better.

There’s another major under-the-hood shift in NHL 13 that goes hand-in-hand with the new skating physics. EA Sports calls this one Hockey IQ and, like True Performance Skating, it aims to offer a more authentic simulation than you’ve seen in the series before.

Hockey IQ amounts to an across-the-board AI upgrade. Computer-controlled players demonstrate much better awareness of what’s happening on the ice around them. Once again, this is largely skill-based. Your starter Ultimate Team of scrubs won’t work well together at first. They’ll miss passes, move out of position, and generally behave like the rough-edged blunt instrument that they’re meant to be when starting out. Switch to an all-star team like the Los Angeles Kings, 2012’s Stanley Cup winners, and you’ll see a dramatic improvement in their performance.

In gameplay terms, skaters are now more on point than ever. With a solid team behind you, you’ll see your mates sticking to the established strategy script. If something’s not working, an entirely new set of AI-influencing sliders — the nuts and bolts of this new Hockey IQ — allows you to tweak a whole new set of variables. You can still fine tune your offensive and defensive strategies, but now you can drill down even deeper and adjust individual line settings.

Do you want your first offensive line to cycle the puck more frequently, or maybe take more shots? Conserve energy to stay at peak performance through the whole game or pour everything into the opening minutes and then struggle to keep up for the rest of the game? All of this can be adjusted using a series of balance-based sliders, and you can watch as the effects of your decisions play out in-game.

There are separate Build Your AI and Create Play Mode options as well that allow you to fine-tune team strategies on a global level. It’s the sort of thing that an amateur player might never play with or even notice — you don’t need to adjust strategies to play NHL 13 effectively — but serious-minded fans will be all over it.

NHL 13 brings back all of the features that fans have come to expect. The main menu highlights the marquee features, which I’ll get to in a bit, but an “Other Game Modes” option opens into a sub-menu that offers up legacy modes like Be A Pro, Be A GM, Be A Legend, Season Mode, Playoff Mode, and so on.

If you game on a console that isn’t Internet-connected, or if you prefer to play offline in general, then you’ll probably want to give some of those options a closer look. For everyone else, it’s all about GM Connected. Essentially, you’re taking the franchise mode from the previous games and layering an impressive level of online functionality on top of it, to the tune of up to 750 live players in one league, assuming roles up and down the hierarchy, from league commissioner to GM to player.

The potential here speaks for itself, though in fairness, the pre-release review period only offers a glimpse of what GM Connected could be. There wasn’t any chance, for example, of assembling a full 24-player team with its own GM, let alone pitting that team against others. That it’s an option is impressive, but that aspect of the mode will be made or broken over time as leagues come together.

Unfortunately, GM Connected is a bit of a clunky beast in its pre-release state. I will update this review accordingly if anything changes shortly after launch, but the interface just isn’t very responsive. Even trying to do something as simple as browse through the list of available public leagues is painfully slow, with multiple seconds of waiting time whenever you scroll down to view the next league on the list. There’s a lot of potential here, but it’s going to remain unrealized if EA doesn’t smooth things out, and quickly.

Also new this year is NHL Moments Live, a mode designed to offer hockey fans the opportunity to see how they would fare in big moments from the NHL’s past and present. At launch, this mode is built entirely around major moments from the 2011/2012 season, plus a few more fantasy scenarios that drop legendary players like Gretzky and Lemieux into modern-day lineups. Complete these various challenges and you earn EA Pucks for use in the newly revamped Hockey Ultimate Team mode.

One of the big complaints that I’ve had in the past about the otherwise addictive HUT mode is how difficult and time-consuming it is to really advance and improve your team. Even if you’re a top player, the earning of EA Pucks has in the past been at such a drip-feed rate that it’s as if EA Sports was pushing players to spend real dollars on buying team-building booster packs. No publisher would do something like that ever though, right?

While microtransactions are still in play, I’m pleased to report that it’s now much easier to build up your stock of EA Pucks. Depending on which difficulty you play at, you can earn anywhere from 25 to 1,000 pucks for completing an NHL Moments Live challenge. Then, over on the HUT side, the revamped Tournaments feature offers you the opportunity to earn hundreds of bonus pucks in single player and online series play. I’ve always been a fan of the card collector side of HUT, and it doesn’t feel nearly as choked with necessary microtransactions in this year’s edition.

Other than the less-than-impressive performance of the GM Connected mode, there’s very little to complain about in NHL 13. The most egregious misstep in my own mind will probably be defended by those who favor more of a true-to-life simulation: product placement. It is everywhere. I don’t mind seeing ads for various companies lining the hockey rink boards — that’s what they’re there for, right? — but having to look at Company Logo X every time I jump into a game because it’s “sponsored” is offensively overt as a cash grab. It’s unnecessary and it doesn’t add in any way to the sense of realism, existing simply to line EA’s pockets. Perhaps those ad dollars are part of what helped make NHL 13 such a dramatic leap forward for the series, but there has to be a better delivery system than that kind of crap.

Some of the old complaints surface as well. Commentators Gary Thorne and Bill Clement return to provide play-by-play analysis and color commentary, respectively. There’s no marked difference between this year and last year, beyond the fact that some new contextual color was recorded. You’ll still hear a lot of the same comments about one action or another repeated again and again in the space of a single game, or even a single period, and you’ll still find that these supposedly expert commentators aren’t always calling plays correctly. Given all of the enhancements on the AI side, it’s a shame that the commentary can’t be similarly smarter.

Then there’s the soundtrack, which makes me continue to wonder exactly who EA Sports thinks is playing these games. I flat-out turned off the music in the menus so I wouldn’t have to hear the same disjointed selection of songs over and over again on repeat.

Lastly, a word of caution to hockey newcomers: NHL 13 is not particularly welcoming if it’s your first time hitting the ice. Giroux’s video introduction to True Performance Skating is helpful, but it doesn’t exactly qualify as a proper tutorial. Moreso now than ever, you are expected to understand both the rules and the physics of ice hockey. There are some helpful options under “Other Game Modes” that let you skate and shoot freely as well as try out various strategies, but there’s nothing that specifically sits you down and explains the inner workings of the sport.

Assuming that the GM Connected mode starts to run more smoothly, none of those complaints really amount to major marks against NHL 13. EA Sports outdid itself on just about every level with this year’s entry, offering hockey fans a ridiculous amount of value on one disc, and one of the strongest sports simulations I’ve seen in my time as a gamer. It’s not as immediately fun and easily accessible as some other sports games might be for total newcomers, but anyone who appreciates both professional hockey and video games should definitely trade up to NHL 13.

The best Android games available right now (December 2022)
The best iPhone games to play in December 2022: Marvel Snap and more
Elden Ring for PS5 is $15 off with delivery in time for the holidays
Best gaming laptop deals: Save on Alienware, Razer and more
The best weapons in Modern Warfare 2: every gun ranked
Pokémon Scarlet and Violet: How to beat the Elite Four
The best Intel processors for 2022
Call of Duty: Warzone Mobile: release date and preregistration details
Monster Hunter Rise is coming to PlayStation and Xbox, minus cross-platform saves
‘Wordle’ today, December 2: Answer, hints, and help for word of the day (#531)
Destiny 2: Where is Xur for the weekend of December 2
Warzone 2.0 and DMZ contract guide: every contract and reward explained
Trust me: Play The Callisto Protocol on its easiest difficulty setting