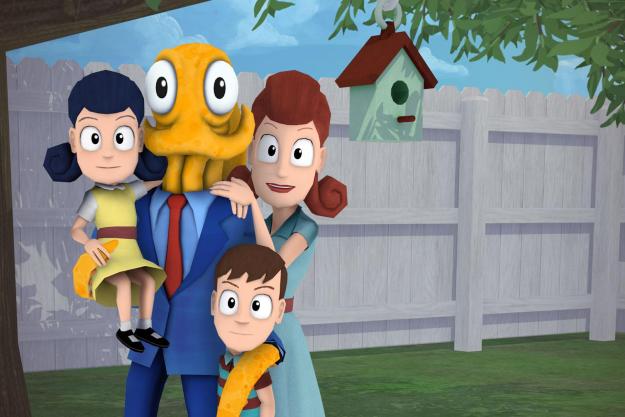 “Young Horses' Octodad: Dadliest Catch makes up for clunky controls and a rough final act with undeniable humor and charm.”

If charm alone could carry a game, Octodad: Dadliest Catch would already be a lock for Game of the Year contention. Developer Young Horses dives deep into the awkward hilarity of telling this bizarre story of an octopus pretending to be a loving human husband and father. The cumbersome controls at the heart of this adventure are needfully frustrating – you’re flopping around on octopus tentacles, after all – while still being manageable. It’s just too bad that an ungainly gameplay leap in the too-brief story’s final act sucks some of the fun out of an otherwise silly good time.

Everything in Dadliest Catch depends on the odd, intentionally unintuitive control scheme. The game’s levels are (for the most part) built around simulating mundane, everyday activities like pouring a glass of milk for your daughter or grilling up a stack of burgers. The challenge and the humor are derived from the odd spectacle of prodding an impossibly land-walking octopus into taking care of an air-breathing human family.

Everything in Dadliest Catch depends on the odd, intentionally unintuitive control scheme.

On a standard gamepad, you press the left and right triggers to lift each of Octodad’s tentacular legs and then use either analog stick to move the raised appendage. This turns even the act of walking into a laborious process of manually raising a leg, pushing it forward, letting it drop, then repeating that with the other leg– which sometimes get wrapped around or otherwise caught on something. The sticks also move Octodad’s grasping “arm” when neither trigger is held down, and the A button (Xbox 360 gamepad) allows you to pick up and drop items with your suction cups. Fine motor control is rendered nearly impossible by the fact that Octodad’s limbs return to their natural center when you release the analog stick.

It sounds horrible because it is horrible. But in a genuinely funny way that instantly mitigates any control frustrations. Riotous calamity follows your every tentacle twitch. Logically, this shouldn’t be fun. Of course, logic flew out the window the moment you sat down to play a game about an octopus posing as a human. A task as simple as mowing the lawn turns into a Herculean test of patience and willpower as you whip around trying to avoid flower beds and family members. The solemn joyfulness of the game’s opening wedding march is really a disastrous comedy of shattered flower vases and crushed banana peels. Why are there banana peels on the floor of a church?!

All of this fumbling physical comedy is offset by the straight-faced family that surrounds our hero. Octodad makes Gumby look graceful and he sounds like a drowning Wookiee when he speaks, but his wife and kids don’t seem to notice any of that. They adore the lovable lug, and it’s strangely touching. Beneath all the slapstick silliness, there’s a goofy, clumsy family man taking care of his genuinely happy family. You can almost imagine Octodad beckoning his family to join him on a road trip to Wally World.

The early game’s everyday scenarios are occasionally interrupted by run-ins with a mad chef who sees through the charade. These escape sequences, coupled with the zany family time, sustain Dadliest Catch‘s short running time quite well until the final section of the game. A surprise visit to the local aquarium goes horribly awry, giving way to a handful of poorly realized stealth sequences and a punishingly challenging dash through a burning room. The difficulty spike is as unwelcome as it is unexpected, and it’s here that control frustration finally overwhelms the formerly-consistent hilarity of Octodad’s awkward octoposity.

The roughly two-hour story is joined by a freeplay mode that allows you to return to any section of the story. You can work to improve your completion times, search for any of the three collectible ties hidden throughout each level, or you can just go create a mess because there’s simple pleasure to be had in watching Octodad fumble his way around. A co-op mode allows two players to split the controls to whichever limbs they’d like – which is as loud and uncoordinated as it sounds – and a Workshop mode allows you to play created levels, either your own (using the supplementary editor app) or those created by others.

The story’s a bit too short and the third act’s jarring gameplay shift may leave some unhappy, but there’s a delightfully awkward game at the heart of Young Horse’s efforts. The basic concept of an octopus posing as a family man is almost too deranged for this world, but it works (surprisingly well, too) far more often than it doesn’t. Octodad: Dadliest Catch is a wonderful mess in all the right ways.

This game was reviewed on PC using a code provided by the publisher.