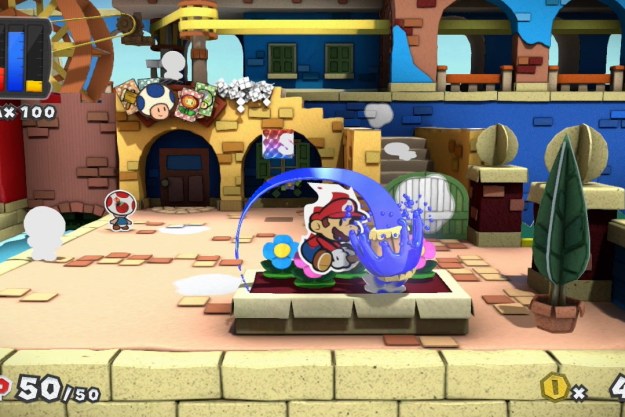 “'Paper Mario: Color Splash' is well-crafted and charming, but its simplicity won't win over skeptical fans.”

Taking the torch from Super Mario RPG on the Super Nintendo, the Paper Mario series has always been one of the most bizarre corners of the expanded Mario universe. Fusing the world and characters of Mario with the mechanical structure of Japanese role-playing games, they have always been a place for Nintendo to get unabashedly absurd. Although the first few games were very well-received, fans have grown increasingly hostile to recent entries that have stripped out its more technical RPG elements in favor of more casual mechanics.

What is likely one of the last games for the Wii U, Paper Mario: Color Splash received a chilly reception from these fans when revealed earlier this year. Will funny writing and a beautiful, handcrafted aesthetic be enough to win over skeptics, or have Nintendo and developer Intelligent Systems simply moved the franchise in a more casual direction and left the more hardcore RPG players behind?

More Mario: Shigeru Miyamoto reveals the true age of his most iconic creation

At the start of the game, Mario and Peach are summoned to the famously colorful Prism Island when they receive a blank letter that turns out to be a folded up paper Toad, drained of all his color. On arriving at the island’s main hub, Port Prisma, they discover that Bowser and his minions have been stealing color from all over the island. A friendly talking paint can named Huey joins Mario as his local guide and sends him on a quest to rescue the six Big Paint Stars, Color Splash’s chromatic MacGuffin du jour, and restore color to the island.

Mario’s primary tool on this quest is a magical paint hammer, which splatters the appropriate colors when he whacks the white spots covering the landscape, objects, and denizens of Prism Island in the wake of Bowser’s color-draining attack. The hammer contains reservoirs of red, blue, and yellow paint, which can be refilled by hitting colored objects around the island and walking over the paint blobs that are knocked out.

Similar to Paper Mario: Sticker Star, battles are conducted by spending one-time-use cards for things like jumps or hammer attacks, which can be found throughout the world or bought at a store in Port Prisma. Mario can spend paint to color these cards in to varying degrees, increasing their efficacy. Enemies’ health dropping is indicated by the color draining out of them, feet-first.

Color Splash does not show any statistics other than Mario’s health, forcing players to rely on these analog power and health meters to monitor their progress in combat. This allows for light tactics, without getting bogged down in min-maxing. Because Mario can only carry a finite amount of cards at any given moment, managing your cards to ensure you have everything you need to deal with a given threat requires planning. Habitual hoarders of consumable items in games will have a hard time grappling with the ephemeral nature of the cards, but fortunately the game is generous enough with both paint and cards that you are rarely left in a lurch.

Prism Island is a colorful assemblage of paper and cardboard, with strips of tape and corrugated edges tying the world’s material composition to the Paper Mario series’ Flatland-like conceit of 2D characters in a 3D world. Color Splash’s papercraft aesthetic is as lovely and charming as anything on the Wii U. It hearkens back to the textiles of last year’s Yoshi’s Woolly World. The Wii U can never compete with its peers, the PlayStation 4 and Xbox One, in a head-to-head competition for high-fidelity graphics, but its arts-and-crafts aesthetic is an excellent way of working within the hardware’s limitations. Color Splash is the most fully-realized iteration of this design sensibility yet, and the results are beautiful.

Color Splash’s papercraft aesthetic is as lovely and charming as anything on the Wii U.

One unfortunate side effect of having 2D characters in 3D environments is that it becomes hard to judge relative depth. Fans of old side-scrolling beat-em-up games like Streets of Rage and Final Fight are familiar with the issue. It’s a minor issue for the most part, but does provoke a bit of frustration when platforming or trying to preemptively jump on enemies while walking around.

Color Splash sounds fantastic as well, meeting the high all-around production standards that we have come to expect from Nintendo. Familiar melodies are orchestrated with jazzy, toe-tapping bombast. Subtle, clever touches reveal how much care went into the sound design, like how Port Prisma’s musical theme cross-fades into different, more sparse arrangements when you enter a building.

To RPG, or not to RPG, that is the question

When it was revealed, Color Splash was met with skepticism from fans concerned that it was continuing the trajectory from Super Paper Mario to Sticker Star in stripping out more and more of the RPG systems that made the original Super Mario RPG and first few Paper Mario games such intriguing departures from previous Mario titles.

Players who did not like Sticker Star will likely be disappointed again by Color Splash. Apart from health and paint capacity, Mario has no stats. He has no companions to fight alongside him, and no ability-enhancing gear to equip. Where Sticker Star offered no experience for defeating enemies, Color Splash provides cardboard hammer fragments, which increase Mario’s paint capacity at discrete thresholds, while his maximum health goes up for each Big Paint Star rescued. It’s slightly more of a progression than Sticker Star, but a far cry from Super Mario RPG.

While Color Splash retains many structural features of an RPG — a hub town full of chatty NPCs, side quests and backtracking, turn-based battles conducted on a separate screen from walking around — the meat has been so stripped away from those bones that it raises questions about whether the RPG label even applies anymore. It’s an RPG-lite at most, or perhaps “Baby’s First RPG,” providing something reminiscent of the genre’s general form and tempo, while removing most of its challenge. For parents looking to ease their young children into Final Fantasy games, this could be an excellent set of training wheels, but fans who want a more robust Mario-themed RPG will be disappointed.

Color Splash also carries over Sticker Star’s environmental and battle puzzles, replacing stickers of objects with cards that can be collected by finding 3D objects throughout the world and “squeezing” all of their paint out. These can be used to solve puzzles in the world, such as summoning a giant desk fan to fill the sails of a ship waiting at port. Boss battles also generally require the use of a particular object, such as a fire extinguisher used put out one boss’ an otherwise-devastating flaming hammer.

The puzzles are rarely more complicated than using the right object in the right situation. As a kid-friendly game, Color Splash generally telegraphs what you will need pretty aggressively, with one Toad on the docks always willing to tell you the next pertinent object. Otherwise you are left to trial and error. However, the one-time-use nature of the cards prevents you from the point-and-click adventure player’s brute force solution, rubbing every object in your inventory on any given challenge to see what sticks. It’s possible to replace an object card once used, but you have to go back to town and buy it from a merchant. The resulting animations, which bring realistically-rendered 3D objects into the papercraft world, are often fun, reminiscent of elaborate summon spells from Final Fantasy games, but the process of getting there offers no real interest or challenge.

The game also gives players the ability to “cut out” parts of the environment when their edges line up on the Wii U gamepad, which then allows Mario to traverse the removed section in 2D and explore otherwise unreachable areas. On paper, the conceit is reminiscent of Link turning into a mural to navigate walls in The Legend of Zelda: A Link Between Worlds, or the perspectival puzzling of Fez. In practice, it lacks the aesthetic charm of Worlds and the ingenuity of Fez.

Paper Mario: Color Splash is an odd hybrid of a game. In light of the diverging “Paper Mario” and “Mario & Luigi” sub-franchises, which both evolved out of Super Mario RPG, it’s a very clear extension of games that came before it. An RPG-lite/adventure game/platformer hybrid, with writing that is sweet and at times quite funny, All of Color Splash’s disparate genre dovetail together nicely into a pleasant, low-key pastiche.

Examined in a vacuum, no individual element of the game is ever particularly fun, challenging, or interesting. All of the edges have been sanded off, leaving something frictionless and inoffensive, like soft rock.

For children or fans of Mario looking for a bit of light escapism that’s not too taxing, Paper Mario: Color Splash is a well-crafted and extensive game that should fill many pleasant hours. Players looking for something with a bit more substance or challenge, however, should look elsewhere.

If you want a more robust, modern Mario RPG, then Mario & Luigi: Paper Jam for the 3DS will scratch that itch.

With the Wii U on the way out and no confirmed details about the NX, Color Splash may fade with its platform, but if the NX supports backward compatibility it could have some legs. In any case, DLC is not generally Nintendo’s MO, so the game that shipped is likely all you get.

You should buy this if you want a light, pleasant, charming, and family-friendly way to fill time. If you want a robust RPG experience, or if you were turned off by Sticker Star, you should probably pass on Color Splash.

Paper Mario: Color Splash arrives exclusively on Wii U on October 7, 2016. For this review we played on a copy provided by the publisher.

Everything we know about the Dead Space Remake